Hey guys, Drew back here. Rumor has it that this may possibly be one of the final, if not the final installment of Vintage Cards from Pop Popps. As most of you guys know, my dad's dad, known as Pop Popps to us, has quite the collection of unique pieces, and recently bought a few lots of vintage (not 80's for you Craigslist Idiots out there) cards for me and gave me a little at a time. From what my dad told me, this could be the final group of cards. Let's take a look at what he included this time: 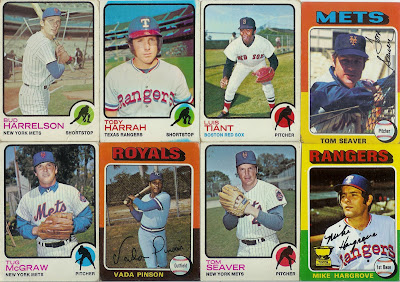 This lot did not have a lot of the big name Hall of Famers and was relatively smaller than the regular stack, but a few Tom Seavers and above average 70's players and I'm most definitely happy! I recently watched the Top 9 players in the 70's, 1 per position, and Toby Harrah won for SS. I never knew much about him but he seemed to be a pretty good player. And Luis Tiant is signing at a show I'm going to soon, so I might meet him which will be cool.

So, if this is it, thank you so much Pop Popps! Over the last 2 or 3 years he's given me many enormously valuable, popular, and great cards from that era as well as a few before that era. The one card that stood out most above all other cards he gave me was the 1956 Topps Yankees team card, which is a really cool card, featuring one of the greatest teams of all time. A few iconic rookie cards were mixed within the lots, among the likes of Goose Gossage, Dennis Eckersley, Joe Morgan, Bruce Sutter, Gary Carter, and many, many more. This collection is in great hands!