Hey guys, Drew back here. My TTM addiction continues as within the past 2 days I've received 2 successes. Check them out: 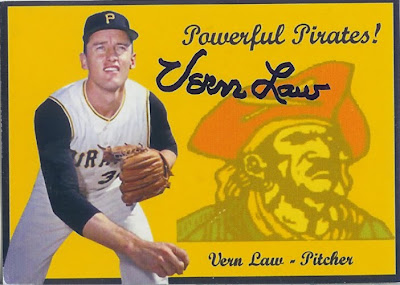 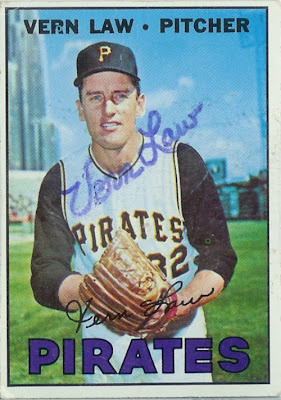 The first success was 2 cards signed by former Pirates pitcher Vern Law. The first card is one of my Pirates customs, and it was signed very nicely in black sharpie, and the second was a 1967 Topps card that was smudged a little onto the back of the custom. It's no problem because I'm too lazy to create the backs right now, and when I do I'll just print it and glue it to the back, so no harm done. This took 10 days to come back, which is again an extremely fast return. Like Dick Groat, his signature is extremely neat and readable, which is always a plus.

Overall that was another great success, and now onto the second and final success to show off today.. 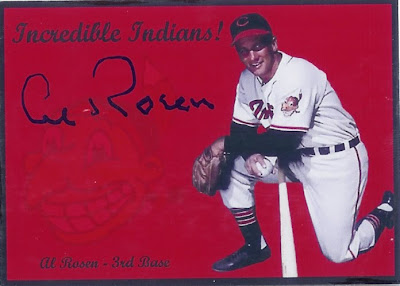 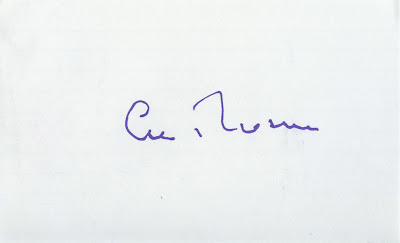 Former Indians 3rd baseman Al Rosen signed a custom and index card for me in 8 days! Rosen, known as the "Hebrew Hammer" or "Flip", played 10 seasons in his MLB career, all for Cleveland. He made 4 All Star teams throughout his career, boasting big home run and RBI numbers. In 1953, he batted .336, with 43 home runs and 145 RBI, and with a grand total of 367 total bases! That was by far his greatest season but he had many other good years in his short career. He also was enlisted into the Navy after Pearl Harbor, and stayed for 2 years. His career batting average was .285, and he hit 192 home runs, and had 1,063 hits. Had he stayed in baseball longer he could've been an even greater player with larger statistics.

"That young feller, that feller's a ball player. He'll give you the works every time. Gets all the hits, gives you the hard tag in the field. That feller's a real competitor, you bet your sweet curse life." - Casey Stengel

Rosen signed the custom really nicely, and the scan doesn't do justice to how it looks in person. However, he sloppily signed the index card, which kinda sucked, but considering he's 86 years young, it's understandable.

I'm so psyched to add these 2 players to my autograph collection! Thanks Mr. Law and Mr. Rosen! See Ya!
Posted by Drew at 8:00 PM