Hey guys, Drew back here. My TTM adventure has officially taken off and I'm afraid this is the most addicting hobby this world has ever known. Seriously, aside from the work it takes to get all of these ready, I've never had so much fun going to the mailbox every day to check for new autographs. I got 2 more nice successes back recently, and I guess I'll have to let you check them out: 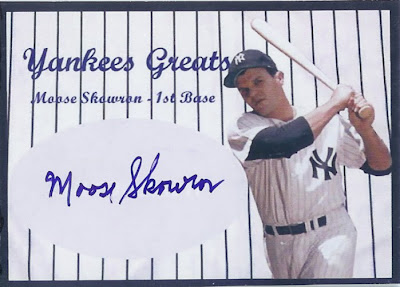 First off, we have 1 autograph from Yankees great Bill "Moose" Skowron! Nicknamed "Moose" after getting a haircut similar to that of Italian dictator Benito Mussolini as a young kid, the name stuck throughout the slugger's career. Moose played for 14 years total, but spent 9 of those seasons in pinstripes. In those 9 years he compiled 1,103 hits, 165 home runs, 672 RBI, and an average of .294. In 1961, Skowron had the greatest season of his career so far, with 28 home runs, and 89 RBI. That same year, he was just a little overshadowed by 2 other Yankees, you know, Mickey Mantle and Roger Maris, and the 3 of them combined with 143 total home runs that season! Achievements wise, Moose was an 8 time All Star, and has enough rings to fill up an entire hand of his! While he wasn't the best known and most popular Yankee at that time, he was a very underrated player!

This return took about 10 days. Man, these older men tend to return letters really fast! The 80 year old Skowron is about as consistent as they get, however I did need to toss a $5 bill in there to make Bill happy. Now on to success number 2... 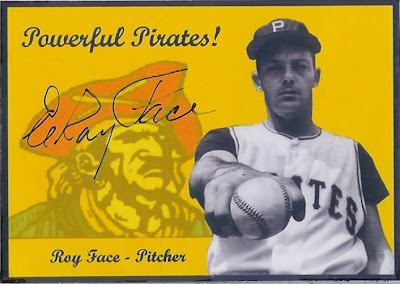 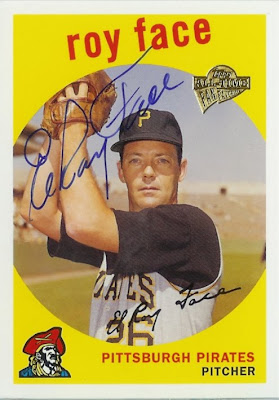 None other than former Pirates reliever Elroy (Roy for short) Face! Face pitched 17 years in the bigs, and was considered a pioneer of the new "relief pitcher" job. According to several sites, he was the first pitcher in history to save 20 games more than once, and until his retirement, only Cy Young and Hoyt Wilhelm had appeared in more games than him. In 1959, he won 17 consecutive games, leading to his astounding .947 winning percentage in that season. He retired with a record of 104-95, an ERA of 3.48, and 193 saves. Not bad for one of the first of the new generation of pitching! He made 6 All Star teams and was again part of the 1960 World Series team that beat the Yankees after a series winning home run by Bill Mazeroski.

Face signed these 2 cards in about 5 days, which is again, incredible! The first is a custom, and it came out sharp, but my favorite was the 2004 Topps All Time Fan Favorites, which came out sweet in blue sharpie!

Well, another 2 great successes in the books, what do you think of them?