Hey guys, Drew back here. Yesterday I received one of the most unforgettable overall maildays of my card collecting life, with a record 4 TTM returns in one day! All 4 came from either Florida or Arizona, and you know what that means, Spring Training returns! Well I might as well get started with the 1st one I opened: 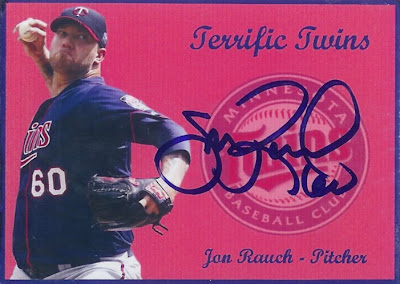 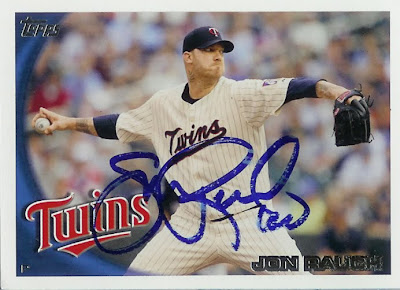 The first success was from now Toronto Blue Jays closer Jon Rauch! Rauch has pitched 8 seasons in the big leagues, mostly as a reliever, and got his biggest MLB opportunity last season after filling in for the injured Joe Nathan. He is also the tallest player in baseball history, at 6 foot 11 inches tall. Rauch signed 2 cards for me, the first being on a custom card, and the second on a 2010 Topps Update card. The first card is not as pink as it looks, and outside a little minor damage on the corners, it looks great, and while the 2010 Topps is a little bubbled up, it still looks nice. He also inscribed his number 60 on both cards! 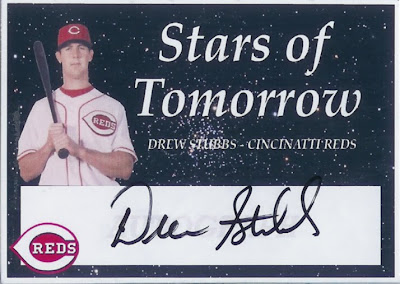 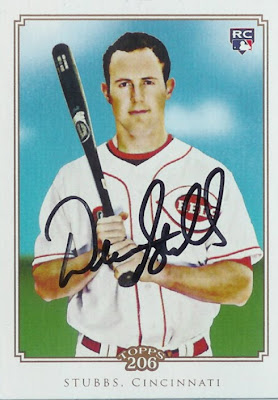 The second success from yesterday was of Reds outfielder Drew Stubbs! Stubbs is heading into his second full season in the big leagues after a pretty solid rookie campaign, hitting .255 with 22 home runs and 77 RBI's. They say the best is yet to come from him, which could mean a big 2011 is awaiting him. His greatest moment in the majors so far was his 3 home run game on the 4th of July. How about that for some fireworks! Stubbs signed both a custom and a 2010 Topps 206 card for me, and they both came out outstanding. He has a very nice signature, and I'm very happy with this quick 9 day return. 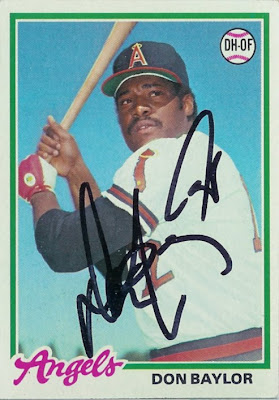 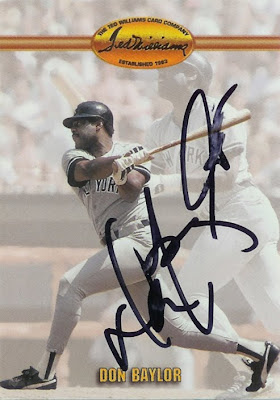 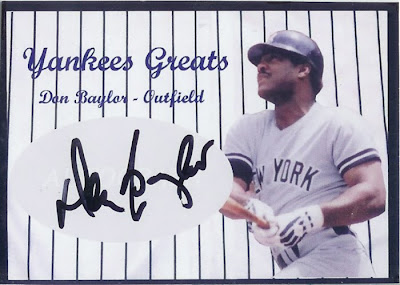 The third return was from former 1979 MVP Don Baylor! Baylor took the job as the Arizona Diamondbacks hitting coach this season, and due to his successful resume as a through the mail signer, I decided to try him out! He played 19 seasons in the majors, for the Orioles, Athletics, Angels, Yankees, Red Sox, and Twins. He made one All Star team in 1979, his best season, when he hit .296 with a career best 36 home runs and 139 RBI! He had a solid overall career, with a career batting average of .260, with 2,135 hits, 338 homers and 1,276 RBI. He signed 3 cards for me: a 1978 Topps, 1993 Ted Williams, and a "Yankees Greats" custom card. He has a very funky looking signature, and all 3 of these look different from each other. The second card is a little smudged but it still looks nice. The best one was definitely the custom though, and I'm really happy with that! Baylor signed these in 16 days, so it was a fairly quick ST return. 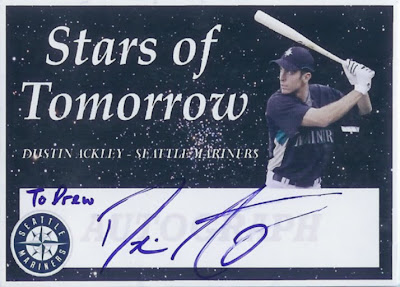 In my opinion, this was the best success of the bunch, Seattle Mariners top prospect Dustin Ackley! Ackley was drafted 2nd overall in the 2009 MLB Draft after Stephen Strasburg, and after recovering from Tommy John surgery in 2008, he came back strong. He was assigned to play in the Arizona Fall League in 2009, and he played so well that he won the MVP for the league! Many people have very high hopes on this kid, and I personally can't wait to see him come up to the big leagues. He personalized the "Stars of Tomorrow" Custom "To Drew", and the card looks really sweet in person! The success took a very short 9 days, and I couldn't be more pleased.

So, now I have gotten 5 successes back out of the 30 I sent to Spring Training, a solid 16% success rate. This hopefully will go up to at least 30-40%, which would definitely make me happy! Any more than that would be considered an incredible Spring Training for me!