Here's to you, Mrs. Robinson

Hey guys, Drew back here! Well, college has started to catch up to me, which explains why I haven't been around as frequently now. Regardless of the work load, I only have had one thing to show off, which has kept me relatively unmotivated in the blogosphere. I've had a big drought with TTM successes of late, with the exception of this really unique success I received on September 27th! 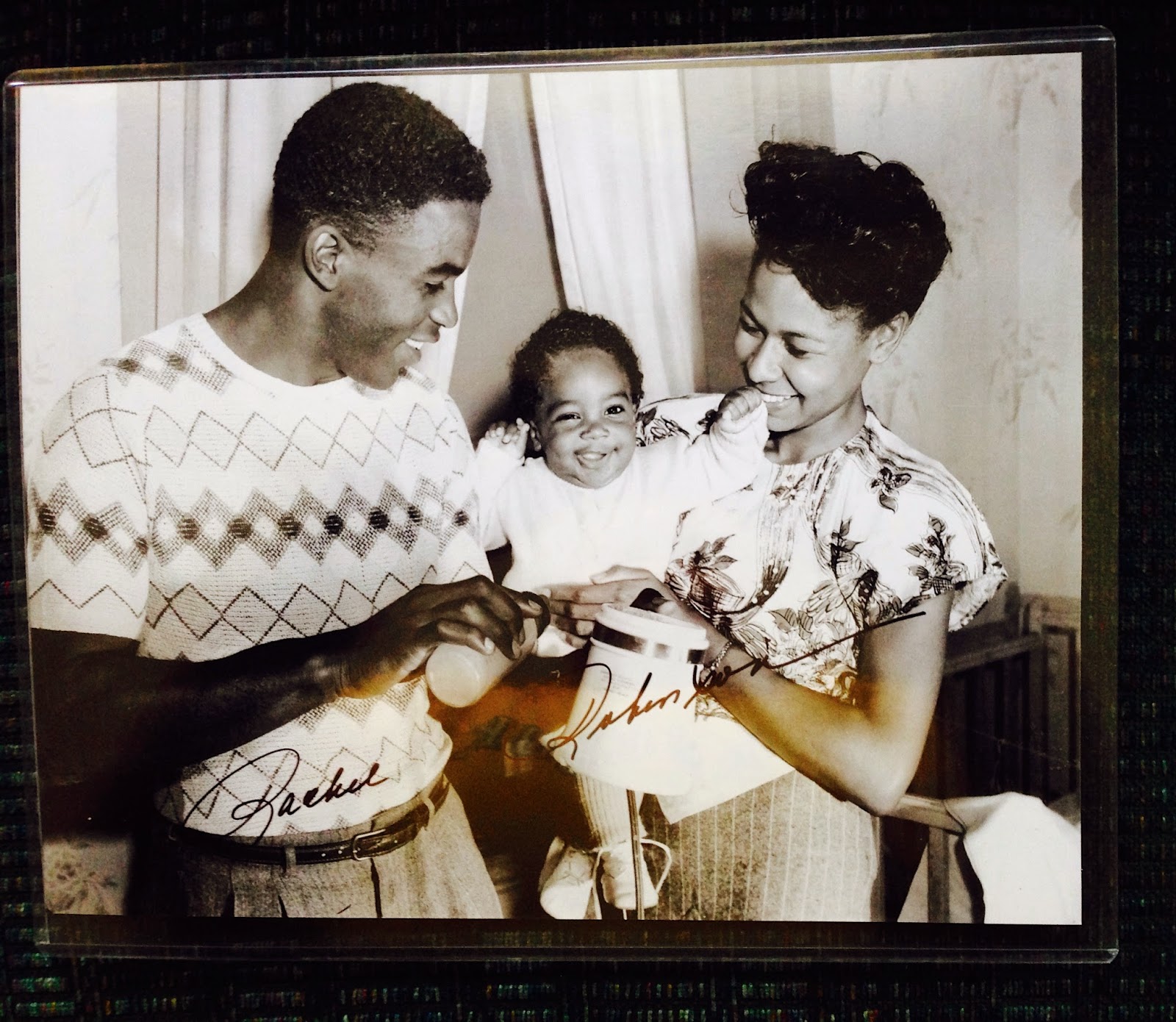 Capping off my recent projects of adding some of baseball royalty's relatives, I was able to get Jackie Robinson's widow Rachel Robinson to sign 2 photos for me! With this success, I now have gotten Babe Ruth's granddaughter Julia Ruth Stevens, Mickey Mantle's son David, and now Robinson. I absolutely love this photo I found online of Jackie, Rachel, and I believe their son Jackie Robinson Jr. The sports world is overrun with publicity, advertising, and pressure, but it's nice to see a picture of perhaps the most controversial athlete in history enjoying being with his family. I don't have enough of baseball's biggest pioneer, but this piece is something I'm very proud to be able to own. 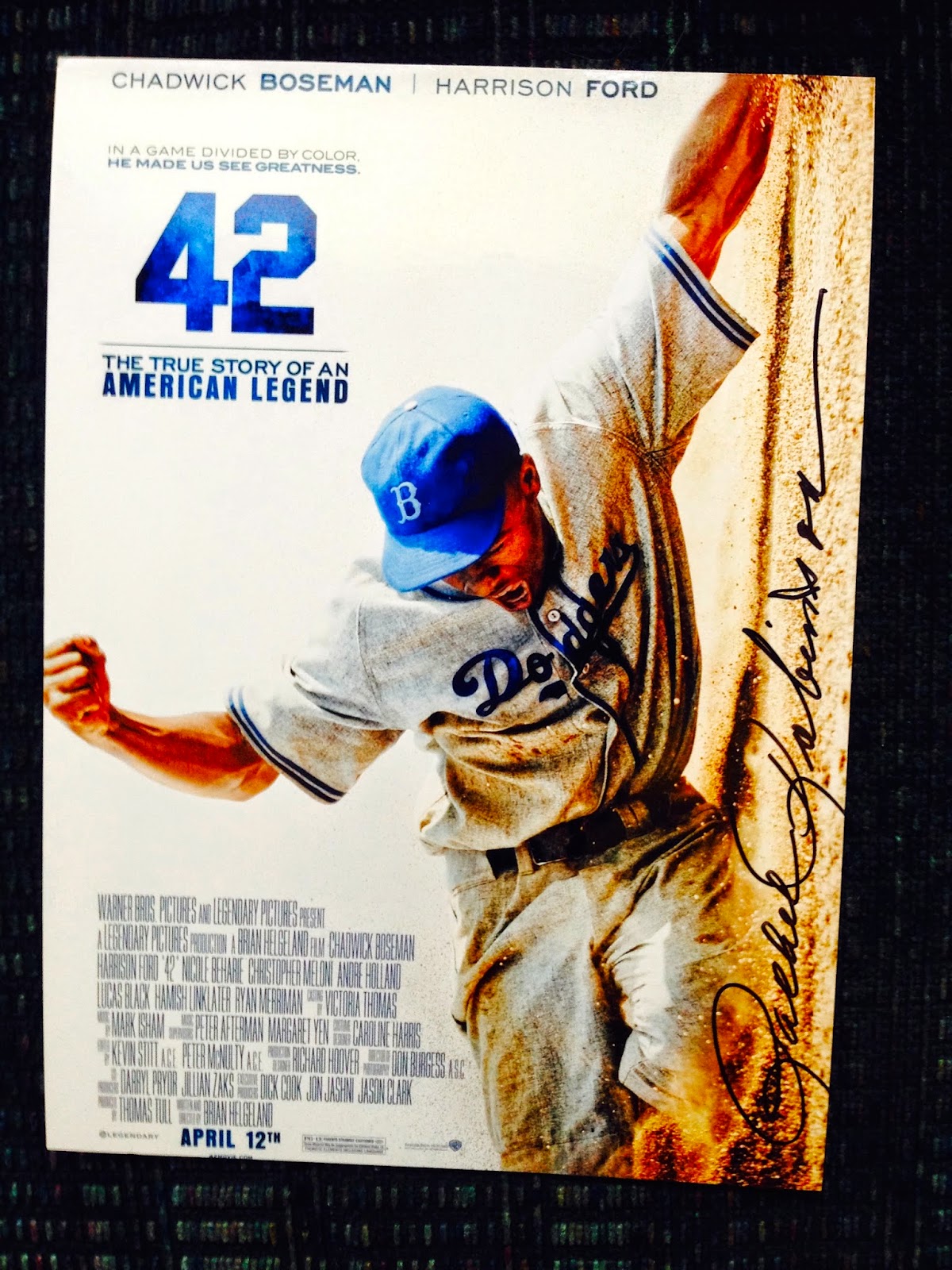 I also was fortunate enough to receive this signed 5x7 "42" movie promo from Robinson! I included this along with the 8x10, but would've been more than content with just the one. She signed this picture perfectly aligned in the direction Jackie is sliding, and it looks so cool! I thought "42" was a pretty good movie, certainly not one of my all time favorite baseball movies, but I think Chadwick Boseman did a good job in the role.

I'm extremely excited to add such an influential American woman's signature to my collection. Behind every strong man is a strong woman, and I'm sure some of her actions led to Jackie making the unbelievable impact he did on our country. Thank you Mrs. Robinson! 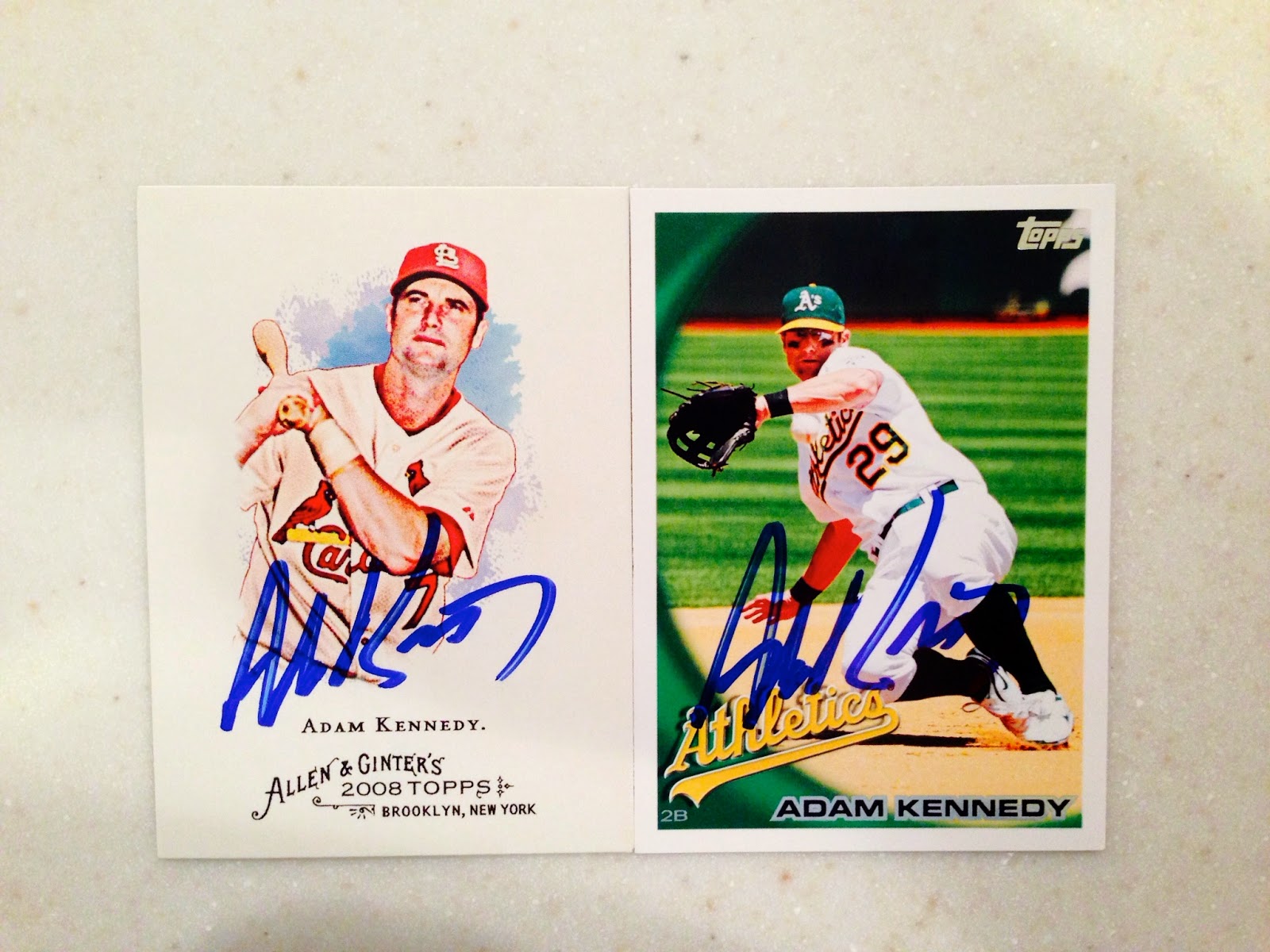 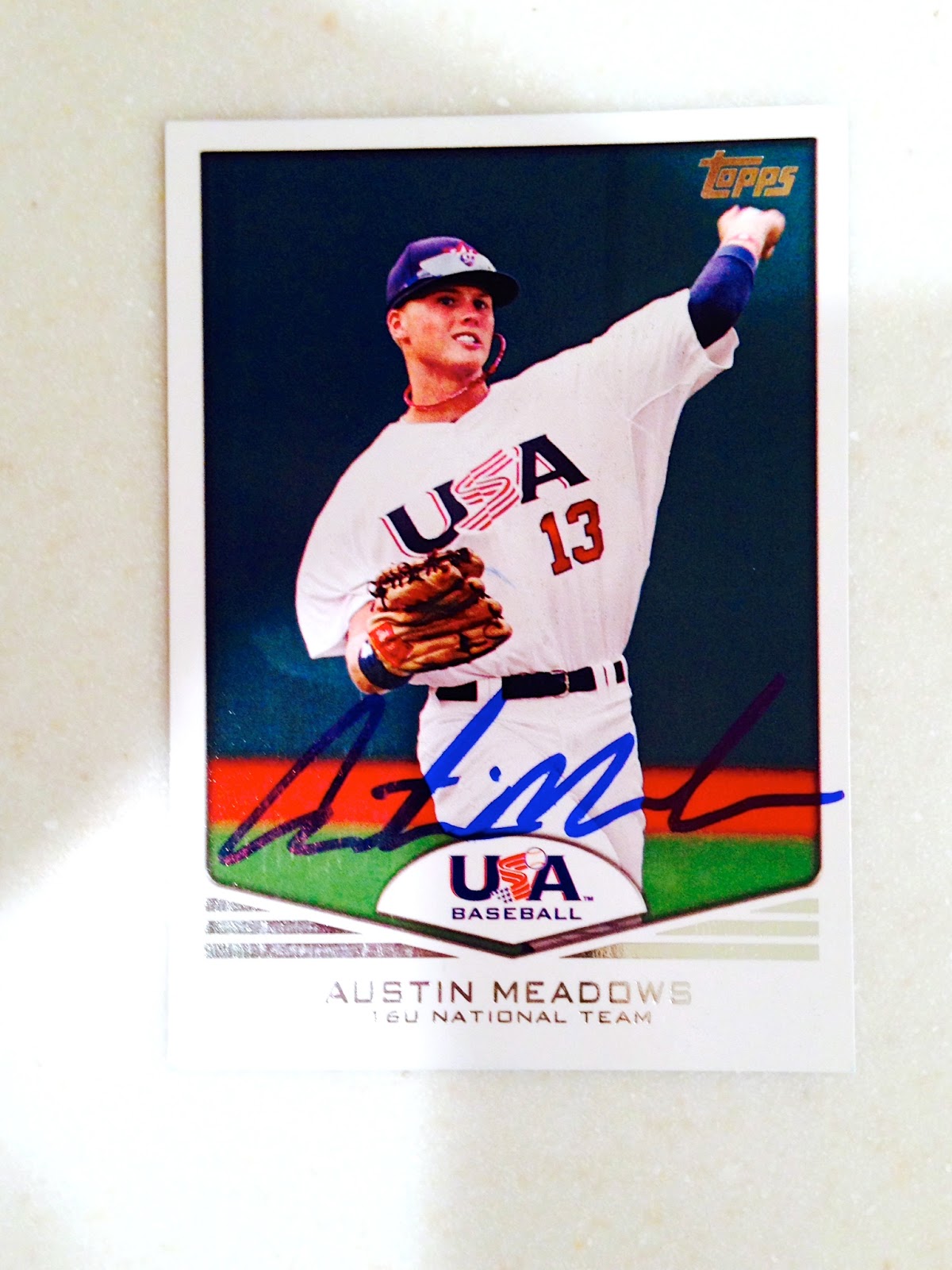 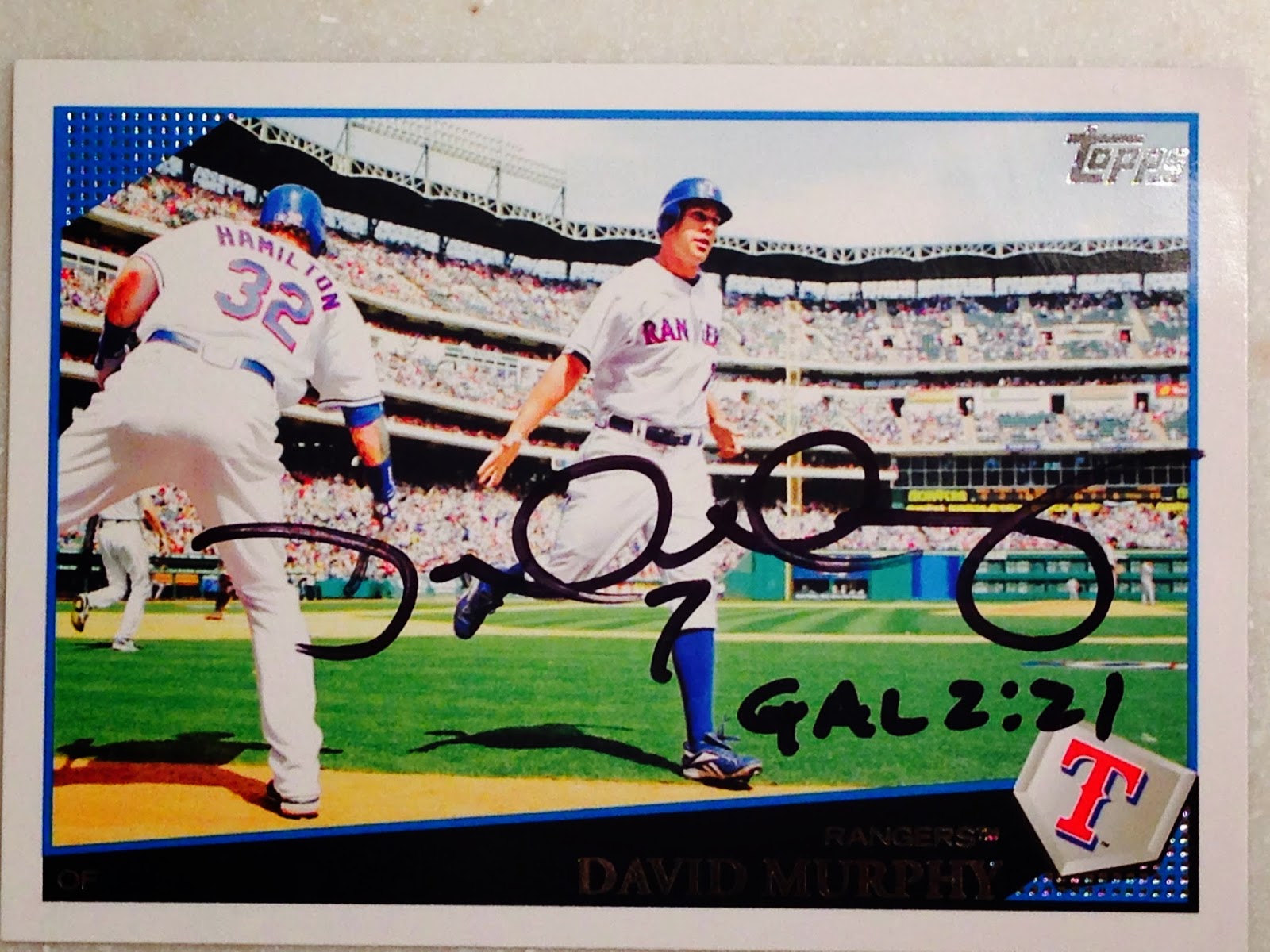 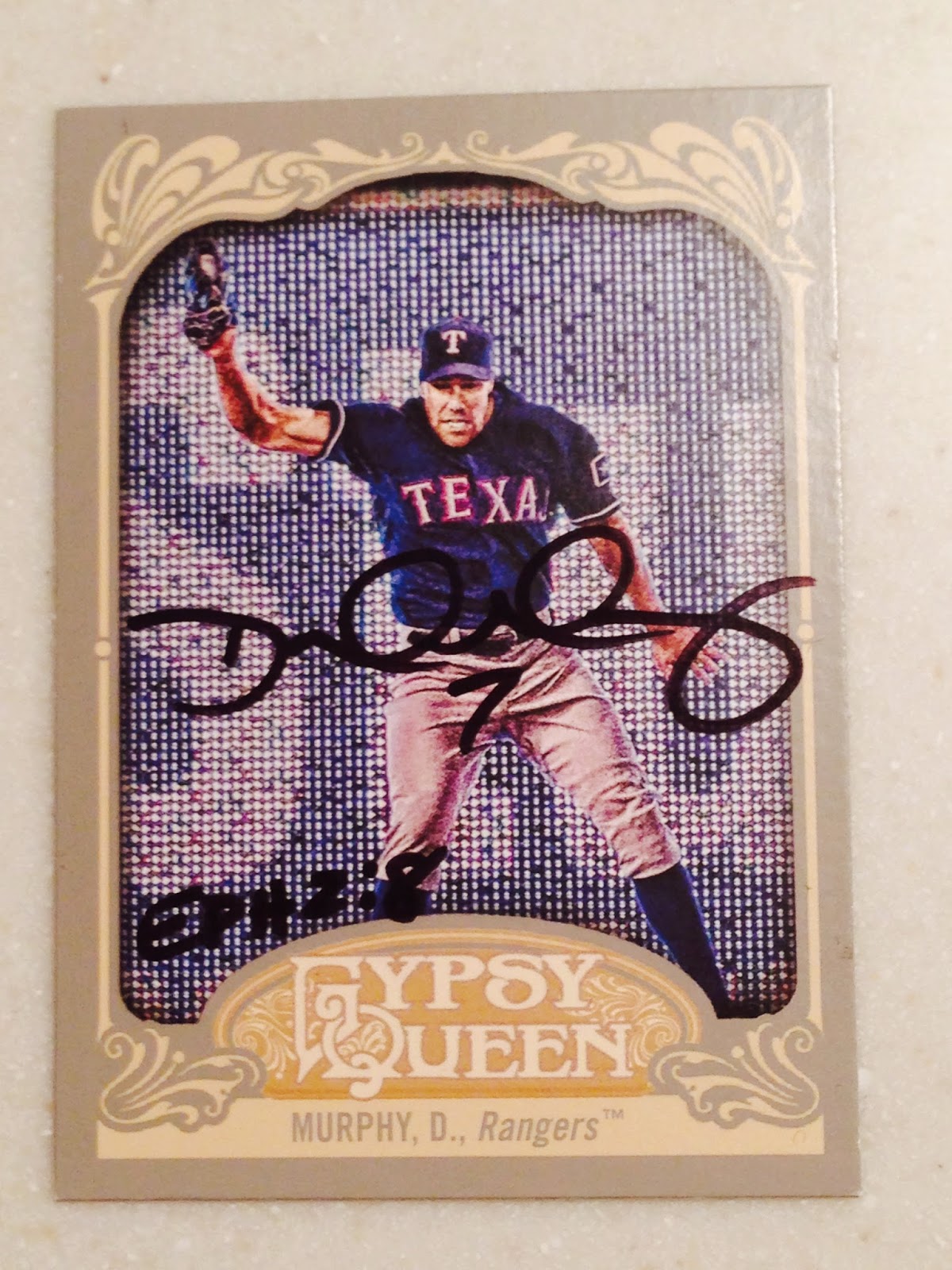 Hey guys, Drew back here! So... I've been in college for a little over a month now, and I have to say, the experience really isn't for me. I've always felt like I was more mature than other kids my age, so seeing people act crazy and lose their minds almost every night is almost sickening to me. I know its what most kids our age are supposed to do, but it doesn't feel right for me, so I may end up returning home to commute to a local school following this semester.

Anyway, one of the coolest things that has happened since arriving at school was receiving a really thoughtful care package from William and his family! William and I have always had a lot in common, and he really understood a lot of what I've been going through when I explained it to him; so he sent me all sorts of snacks and cards to help brighten my day. And he sure did! 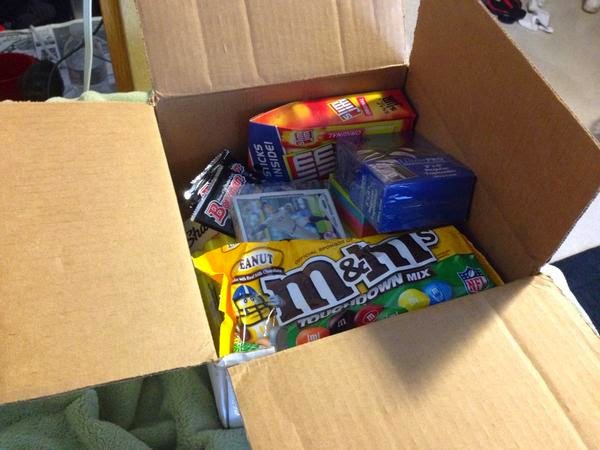 Within all of the awesomeness in the box were 3 packs of Bowman baseball! Here's what came out of them: 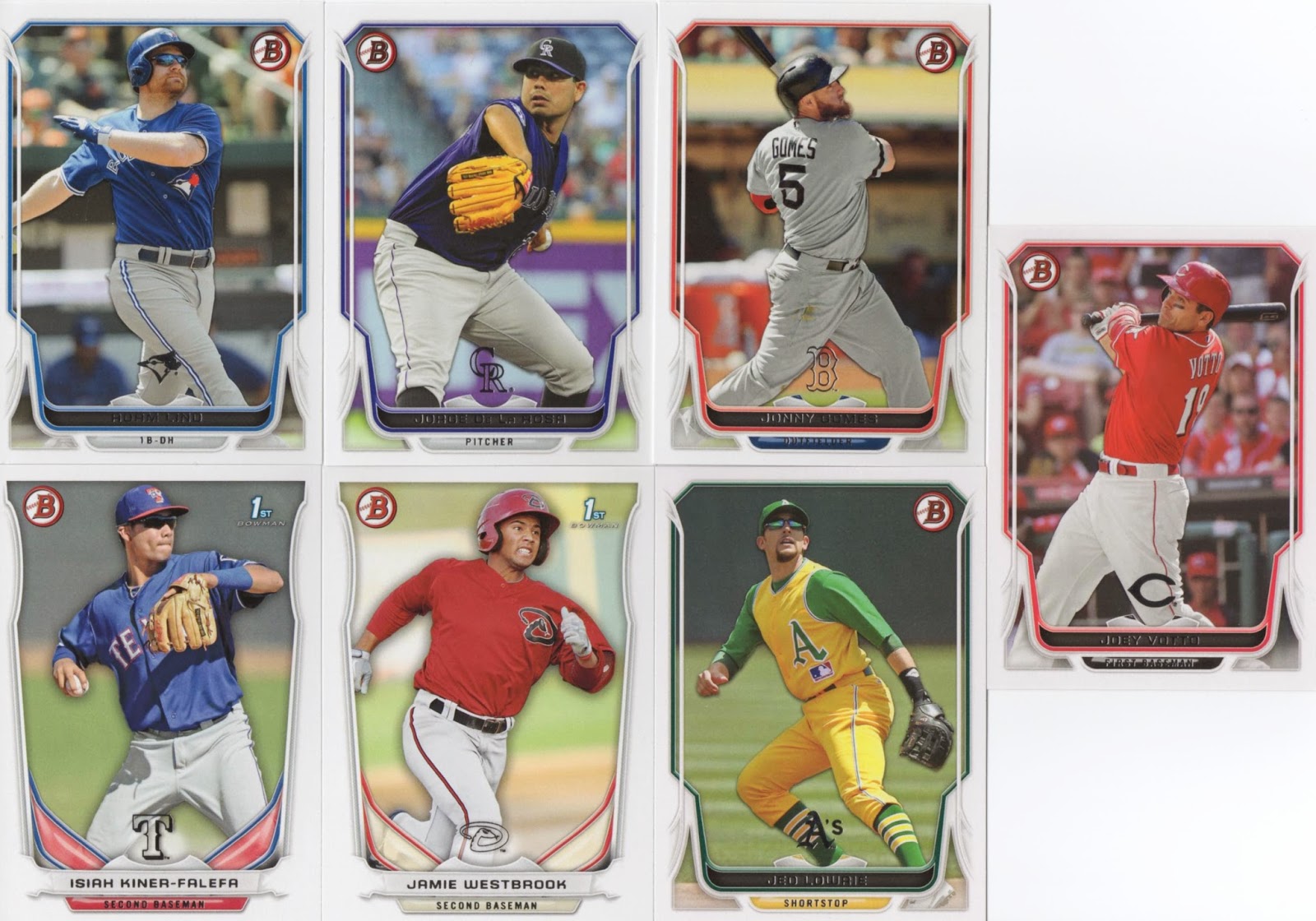 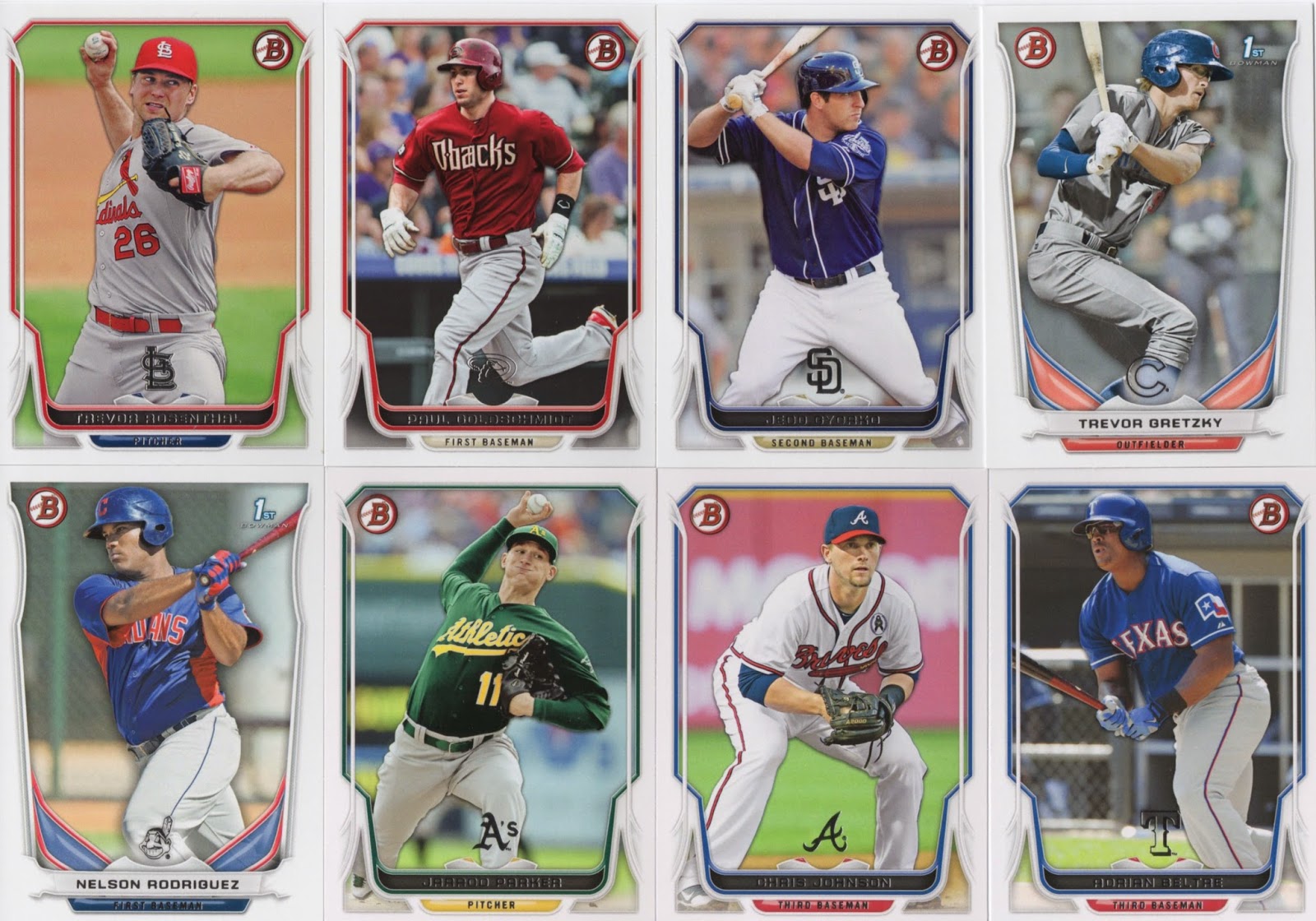 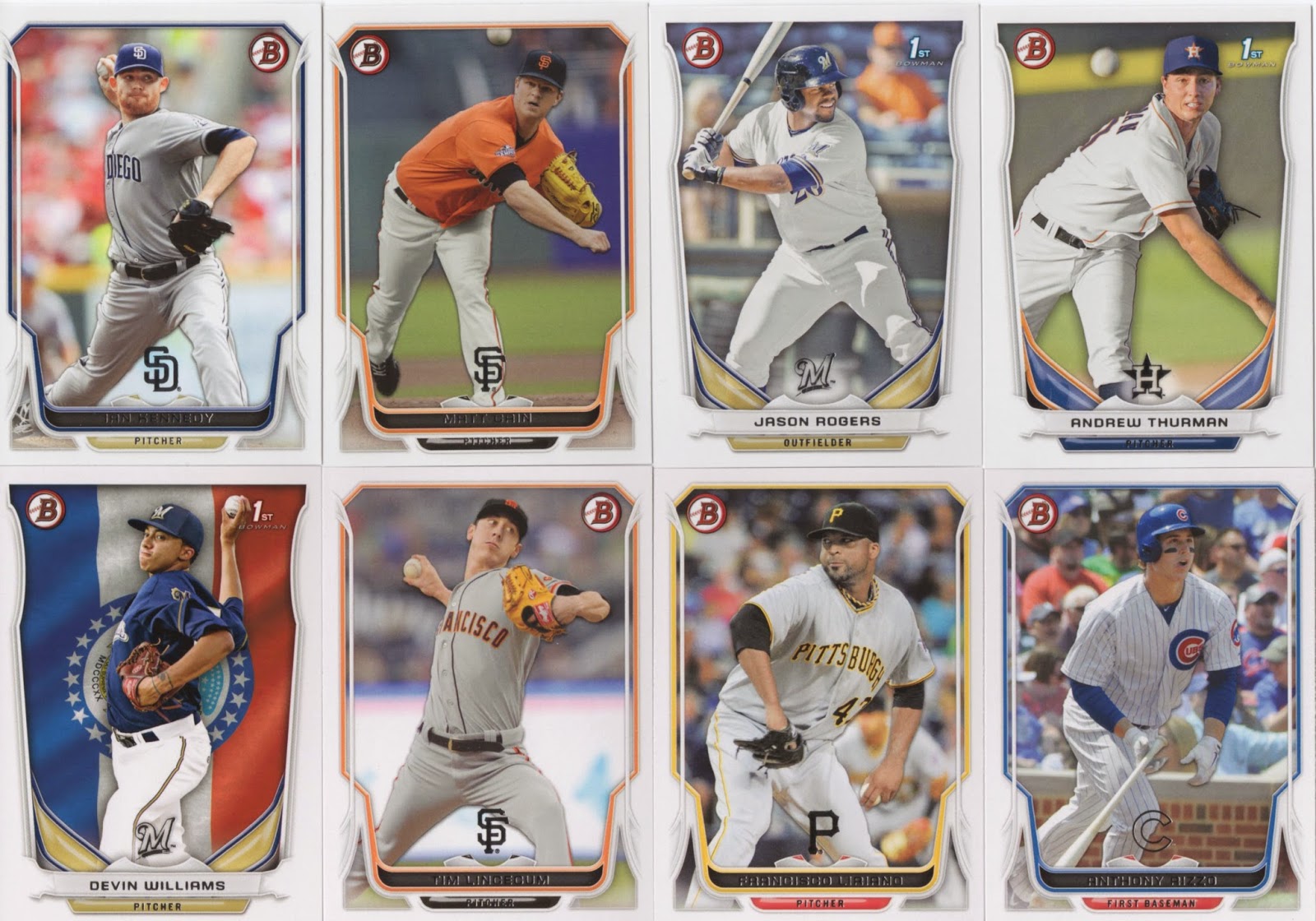 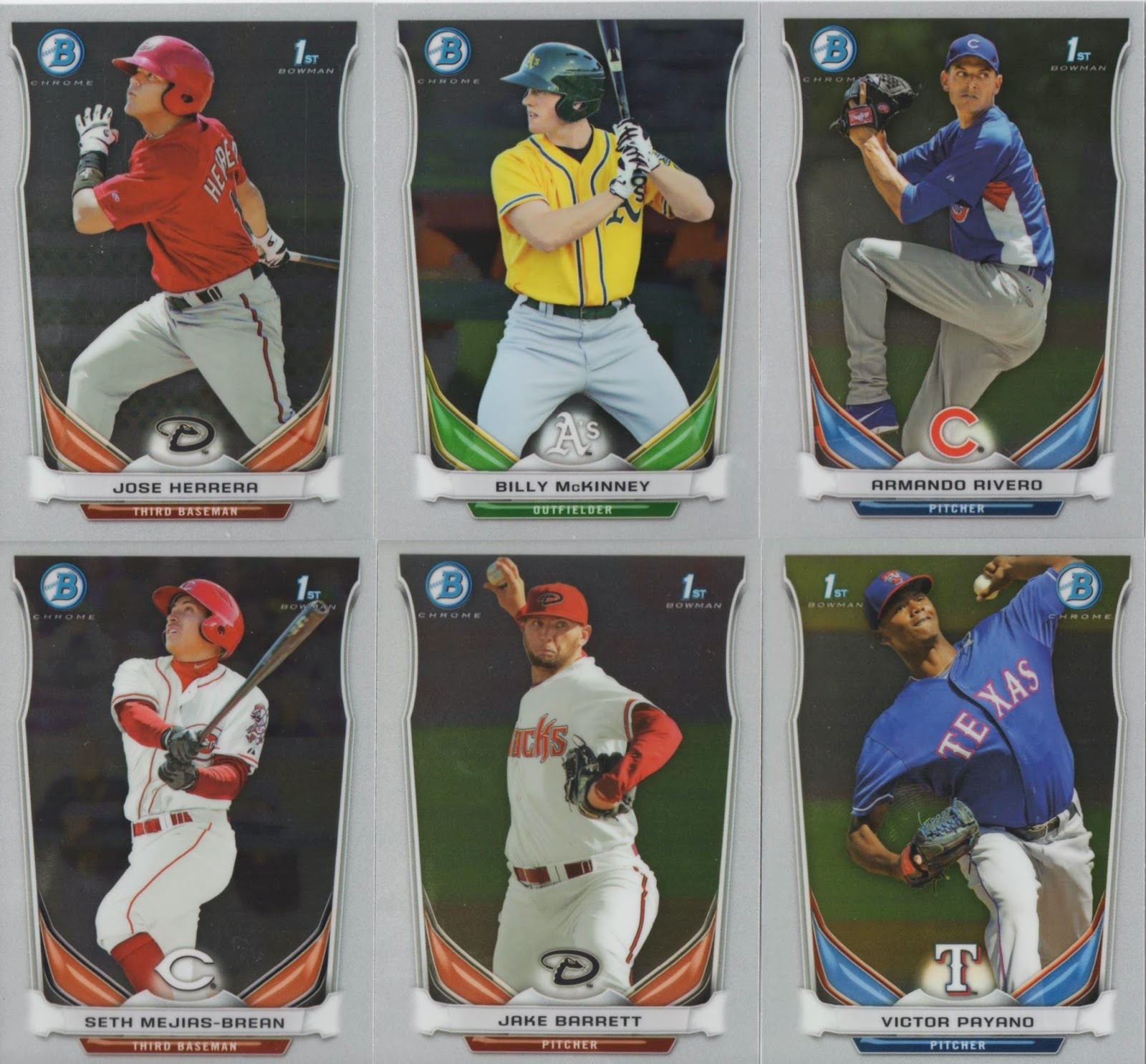 Nothing overly spectacular was found in these packs, but I did miss the feeling of opening a pack. When things get stripped away from you and you're in a position to start over, there's absolutely nothing better than going back to what you love; and being able to open packs, even though I haven't been very interested in buying cards lately; was an awful lot of fun. 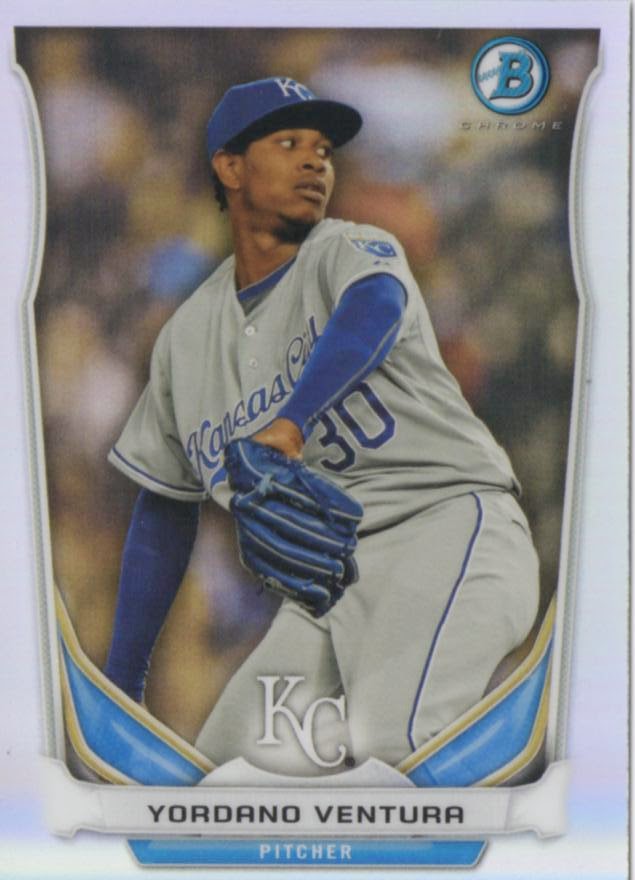 The highlight of the 3 packs was this mini refractor of Royals star rookie Yordano Ventura. These Royals games have been phenomenal thus far into the postseason. I've been glued to my TV whenever they've played (especially because I don't get Fox Sports 1 on my TV, depriving me of all the NL games). William, your Orioles are an awesome story, and seeing them win would be great for your franchise, but I wouldn't be upset if the Royals made it to the World Series one bit. 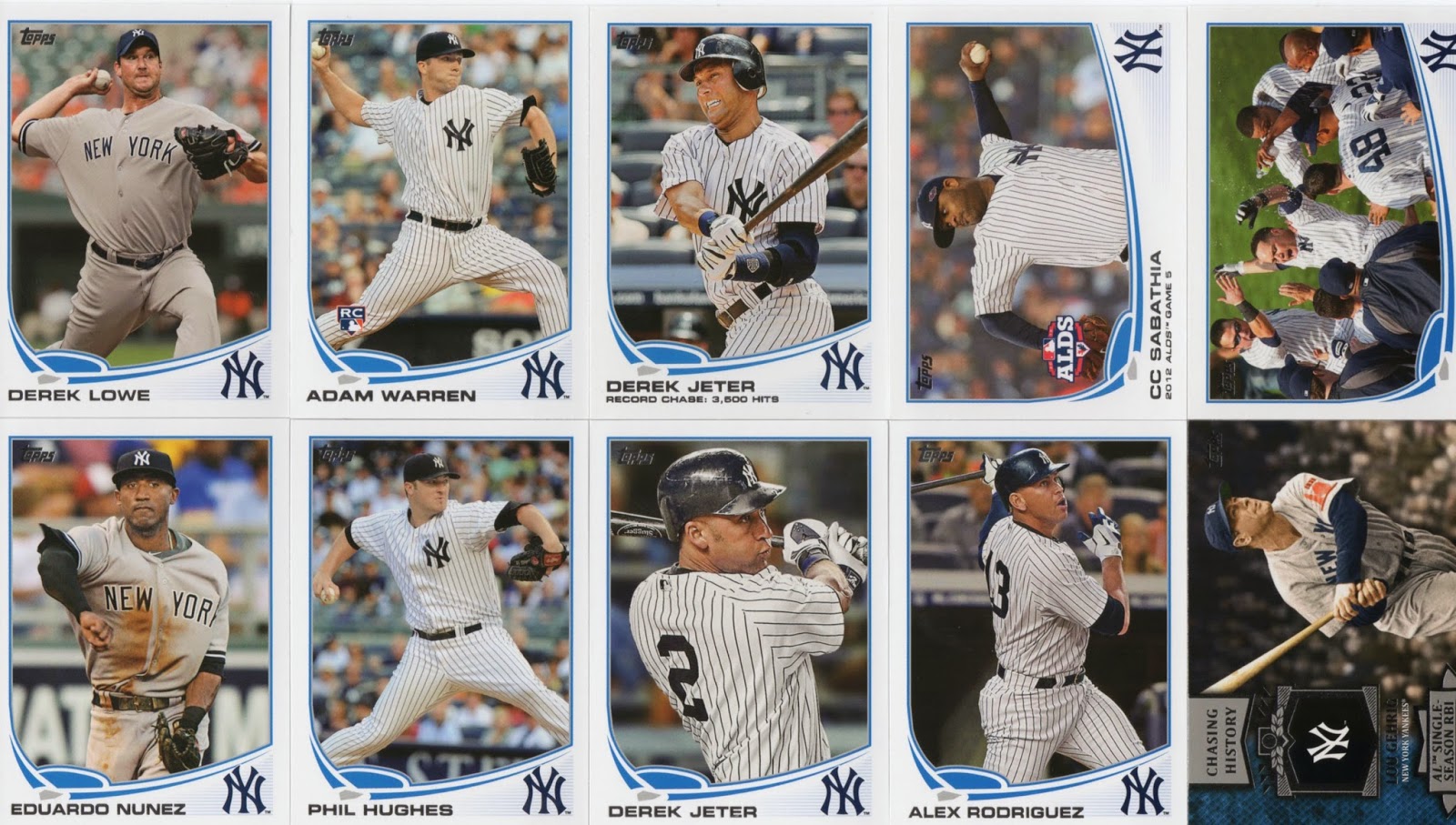 William also threw in a bunch of recent Yankees cards he's pulled, including a ton of 2013 Topps Mini cards. I've never even seen these to be completely honest, but I'm really glad I got the chance to see them. It's a cool concept solely because Topps did the same thing in the 1970's, otherwise it'd just be an annoying gimmick. I'll take any Jeter cards I can get though! (By the way, sorry the scan got cut off, I'm still adjusting to my new printer/scanner I have in my dorm!) 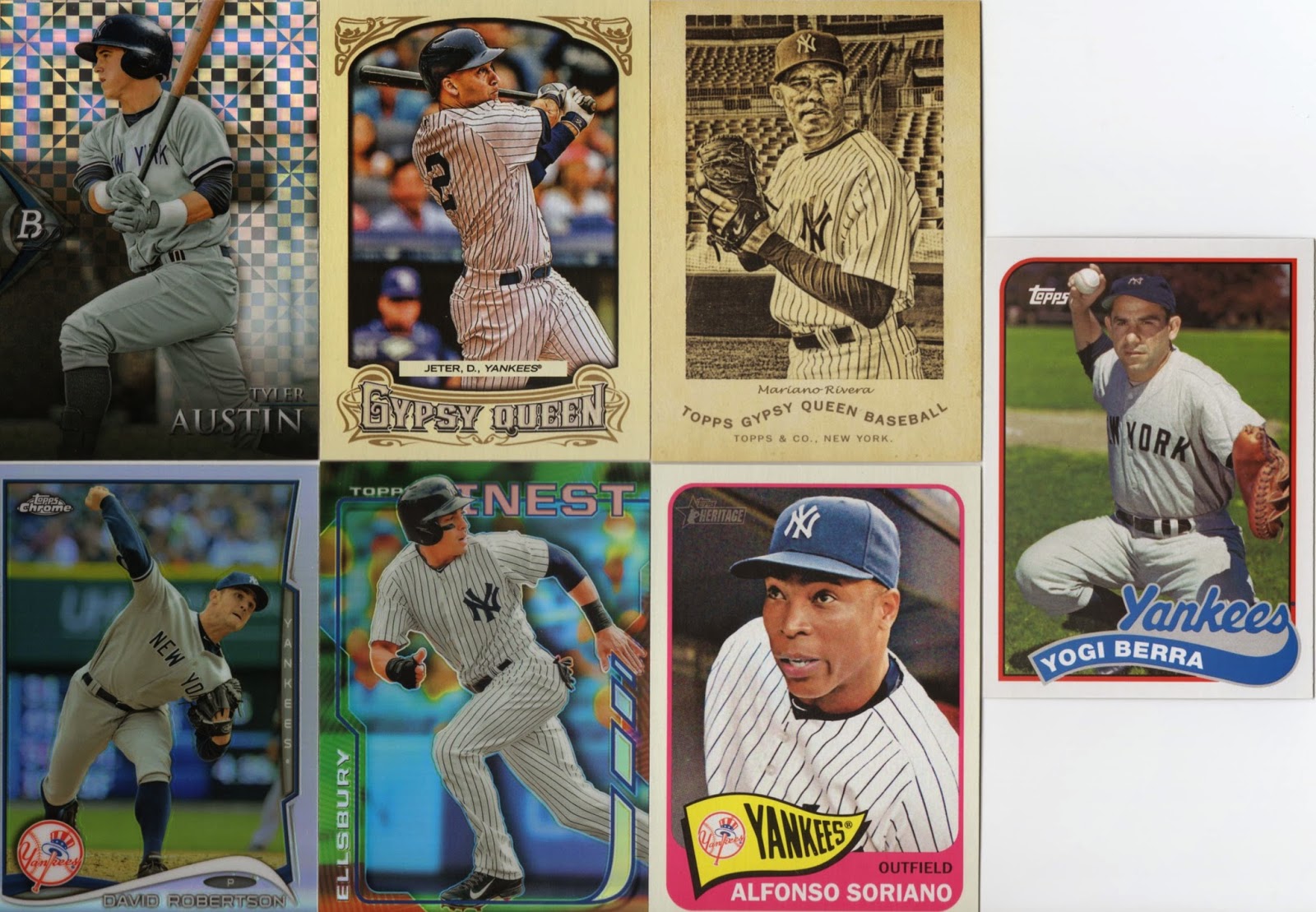 Along with the Topps mini cards came some other gorgeous Yankees cards, all of which I'm certain I don't already have. I love the look of this year's Finest, and Gypsy Queen (as overdone as it is by now) still has a soft spot in my heart. I also completely ignored the fact that Topps Heritage covered my favorite vintage set of all time today, and I may have to go out and buy some packs of it now!

William, you're the man. I really appreciate all you do to cheer me up, you're a great friend, and even though we've been used to being long distance friends for a while, I definitely miss being more readily available to talk. Thank you. (And thank Chris again for the awesome letter!)

Congrats to the Orioles on advancing, by the way! See Ya!
Posted by Drew at 8:42 PM 4 comments: