Autographed Baseball of a Legendary Flamethrower!

Hey guys, Drew back here! My Christmas recap was delayed a bit due to just pure busyness, however I am here to show off some of the sweet new additions in my collection! Before Christmas, I asked my mom if I could use some of the allotted Christmas money she would normally spend on me, and put it towards some nice autographed pieces for my collection. It was a little strange buying my own gifts, but with the reoccurring issue of authenticity, and since she wouldn't know where to start, it was probably for the best.

So, William sent me a link to this website called collectauctions.com, which was about to do a very large auction containing tons of incredible memorabilia! Since not many people know about the site, we were both able to add a few sweet pieces to our collections for more affordable prices than they would have been anywhere else! I bought a lot of 2 signed baseballs, along with a third baseball that in my eyes, isn't quite complete yet, but you'll see that another day. Without any further ado, here is the first of the 3 balls, one that I got in a lot with tomorrow's baseball, for $100 (plus buyer's premium charges)! 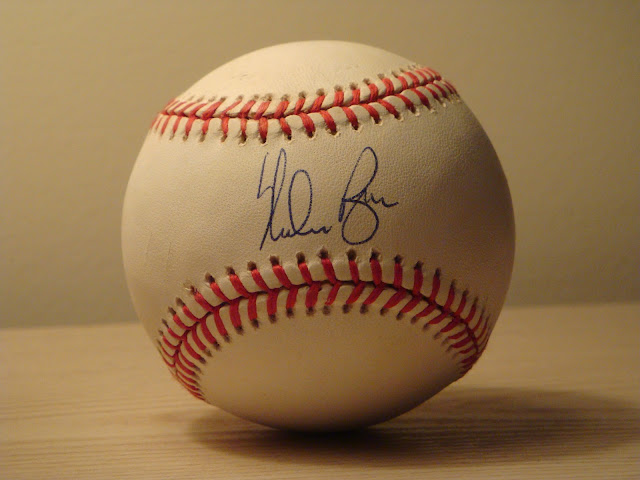 Ball #1 is signed by one of the most overpowering pitchers in baseball history, a guy by the name of Nolan Ryan! I've wanted a Ryan autograph for a long time now, and when I saw the opportunity to grab this along with the other ball you'll see tomorrow at the price they were at, I had to do it! Ryan's bold, yet small signature was signed here on an OAL Bobby Brown baseball, and the autograph looks really sharp!

The ball doesn't have a PSA sticker on it, however in the box, there was a certificate of authenticity, pre-certified from PSA/DNA! I got a little nervous when I opened the box on Christmas morning, because these papers were buried below all of the packaging peanuts, and I was starting to think the company lied about them being certified, but sure enough I did some more digging and was instantly relieved!

I'm pretty sure there isn't much to say about Ryan that hasn't already been said. 7 no hitters, 324 wins, 5,714 strikeouts; and one of the most dominating presences baseball has ever seen. While I don't believe he should be in the top 5 best ever, he certainly deserves a spot just outside of that elite group. Either way, I'm still extremely excited to add this to my fresh autographed baseball collection!

The Fat Man Fell Down My Chimney! Christmas Set Completion!

Hey everyone, Drew back here! Before I get to anything, I just want to wish each and every one of you a Merry Christmas, Happy Hanukkah, Kwanzaa, etc. Happy Holidays! I hope everyone had a fantastic holiday, because I certainly did! I got some really great pieces to show off over the next week or so for you guys, and I really hope you enjoy them half as much as I do! We'll start with this beauty, one that just so happened to complete a pretty darn nice set of mine... 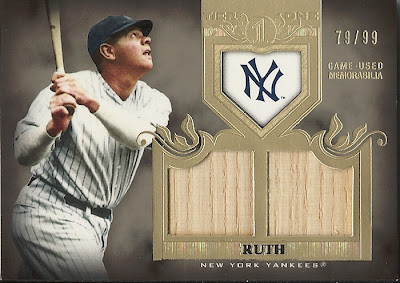 The Great Bambino was able to climb down the chimney (surprisingly) and he just so happened to land in my stocking! Out of 2011 Topps Tier One, this Babe Ruth relic was the final piece I needed to complete the 50 card set! Unfortunately, two of the cards have been redeemed but still haven't made their way from Topps, even though 2012 Tier One has been out for months and preview images of 2013 Tier One were released yesterday. However, even if they don't ever make Rickey Henderson and Ryne Sandberg's cards, I will have the set complete.

I never dreamed to own a piece of Babe Ruth's anything. Whether it be a piece of his hat, a hair follicle, jersey, undershirt, belt, pants, jockstrap, glove, shoe, bat, or anything; I never thought that I'd be able to have any of Ruth's memorabilia. Even though the relic has lost a lot of its appeal to me, there is still a whole lot that is special about this card, and the whole set for that matter. Tier One offered collectors a fairly affordable opportunity to own pieces of the game's classic players such as Ruth, Gehrig, Foxx, Cobb, and Hornsby, which is awfully hard to find nowadays. I probably wound up spending a good $400 myself on the set, but William helped out with the Gehrig and Aaron, and my dad certainly helped out a ton as well. I couldn't have done it without you guys, and it means a lot that you wanted to help me with my goals!

This Ruth card has instantly became one of the all time favorites in my collection. One day, I'll have to post pictures of the entire set, but I'd like to hear back from Topps about the final two cards before I do so. It may be complete, but those white fillers just haven't sat well with me since I've gotten them.

Anyway, once again, Merry Christmas everyone! And thank you Mom & Dad! See Ya!
Posted by Drew at 11:23 PM 7 comments: 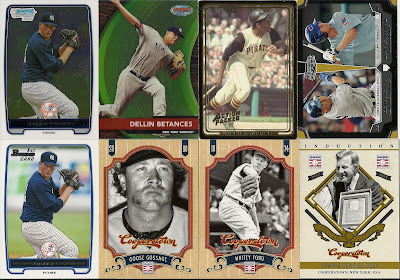 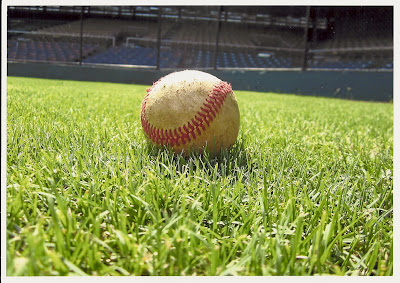 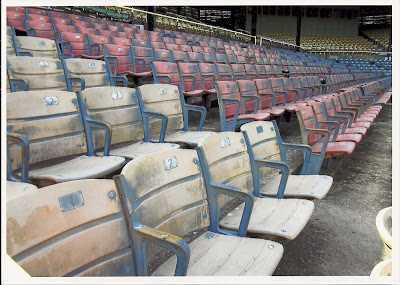 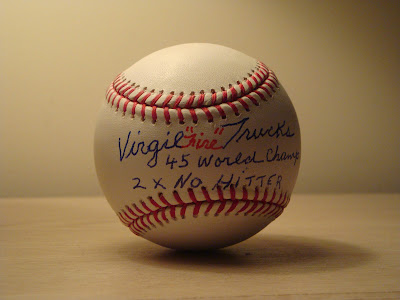 Check Out My Cards on COMC!

Hey guys, Drew back here! Today has been a big day for me, as I've finally started to lose the "I want everything" mindset and instead only want things that really appeal to me. I listed 64 cards on Check Out My Collectibles (formerly Check Out My Cards), all of which being rookie cards, serial numbered cards, relics, and autographs! I'm trying to raise enough store credit to buy a few cards I'd personally prefer in my collection, and it really would mean the world to me if you guys took a minute to check out what I have to offer! I'm willing to work with prices, and oh by the way, shipping is free for any card purchased on the site during the holiday season!

Hey guys, Drew back here. Boy has it been a while, as I've been drowning in schoolwork the past few weeks. Fortunately, Christmas break is coming up, which means 1) more opportunities to post, and 2) more TO post! I haven't had a lot of things come in lately, but I did forget to show you guys this pickup. Take a look: 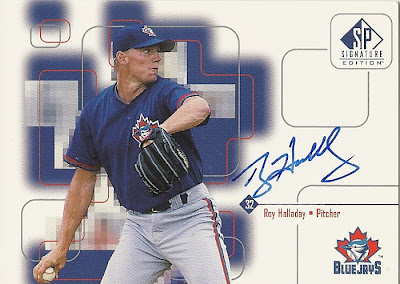 Out of 1999 SP Signature Edition, I added a sweet Roy Halladay rookie auto! This is one of Halladay's first certified autograph cards, which only adds to how awesome any autograph of his could be. I've always wanted to add "Doc" to my collection, since he was one of the dominant pitchers I've grown up watching. Randy Johnson was older when I began watching baseball, along with Roger Clemens, Pedro Martinez, and Greg Maddux, so Halladay was one of the best ones I've gotten the privilege to watch. With 199 wins to his credit, I decided to get one now before he reached number 200, most likely in the 2013 season.

This card also completed my Halladay trifecta, consisting of a 2009 Sweet Spot relic, a Bowman's Best rookie card, and now this sharp autograph!

Please, be sure to be on the lookout for more awesomeness within the next month. Christmas is going to be big for my collection from the way it sounds, and a card show will soon follow. Stay tuned, and thanks for reading!