The Beginning of the End... 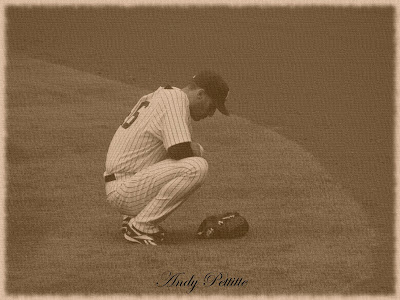 Hey guys, Drew back here. If you haven't heard the big news of today yet, 1 of the 4 Core Four Yankees players is planning to announce his retirement tomorrow. Andy Pettitte has been spending a lot of time deciding whether to return to the team in 2011 or not, and apparently, it's over. While it seemed as if this would be the case for the last few weeks, it's still hard to picture him not giving it all on the mound for the Yankees next season, something he's done for all but 3 seasons since his debut in 1995.

From the beginning of his career, he has been one of the most consistent pitchers in baseball. While his rookie season wasn't phenomenal (12-9, 4.17 ERA), it was a sign of good things to come. In 1996, he won 21 games, with a 3.87 ERA, finishing second behind Pat Hentgen in Cy Young voting. Of course, the Yankees went on to win 4 World Series Championships in 5 years due to the clutch performances that Pettitte delivered every time he was scheduled to pitch! From 1997-2003, Andy won at least 13 games in each season, with a high of 19, and a 2.88 ERA in 1997.

After playing in a total of 6 World Series in 9 seasons with the Yankees, he decided to take his talents down south to Texas, signing a 3 year, $31.5 million dollar deal with the Houston Astros. The main reason for this move was due to wanting to be near his family, and he grew up there; although he was born in Louisiana. In 2004, an elbow surgery shortened his season, but the next season he posted a 2.39 ERA (the best of his career) and led the Astros to the World Series, although they could not beat the White Sox. After a so-so 2006, Pettitte returned to the Yankees in 2007.

He won 15 games in 2007 for the Yankees and was able to play with his good friend Roger Clemens again, who left for the Astros prior to Pettitte's decision to play for Texas and joined the Yankees mid-season. After a sub-par season in 2008, he came back and had a better season in 2009. He delivered a 4-0 W-L in the postseason, performing at maybe the highest level he could possibly perform at that point in his career, and the Yankees beat the Phillies to win the World Series that season! And after making the All Star team last season, he got injured and did not return until the Yankees reached the postseason, where he was 1-1 with a 2.57 in the Yankees championship series loss to the Texas Rangers.

All said and done, Pettitte is one of the greatest pitchers I've gotten the privilege to watch, and he was so intimidating. He won 240 games, losing 138, with a career ERA of 3.88, and 2251 strikeouts. He was also elected to 3 All Star teams and posted two 20 win seasons in his 16 year career. Adding to his impressive resume are his MLB record 19 postseason wins, the countless clutch postseason performances, 6 series clinching wins, and appearances in 8 different World Series'. He left baseball with an entire hand of rings, and say what you want about the Yankees payroll, but it takes an awful lot to pitch in New York with all of the pressure and yet be better than any other Yankees pitcher in the postseason. Some say he was the greatest pitcher in postseason history even!

But does he have credentials to make the Hall of Fame? Due to his admission of 2-4 HGH uses in 2002 to heal an injured elbow, people consider him a cheater. Which he is. However, outside of those uses in one season, he denied any further uses of any performance enhancing drugs. He came out to Spring Training in 2008 and apologized to the fans about his usage of these drugs. I think, if Pettitte is honest, which I believe him, the one year he used wasn't his greatest year, and he had many other non-steroids seasons that could still land him in Cooperstown.

Everyone makes small mistakes. Is Pettitte worth a plaque in Cooperstown? I would love to know what you think! I have a feeling that he is borderline but will get in after many years after hearing of the recent induction of Bert Blyleven. But, everyone has their own opinion. Whats yours?

I think today is a day to enjoy the wonderful career of Andrew Eugene Pettitte, one of my favorite pitchers of all time, and one of the best guys in baseball. Thanks so much for the wonderful years Andy, we're gonna miss you. (SERIOUSLY.. WE WILL)