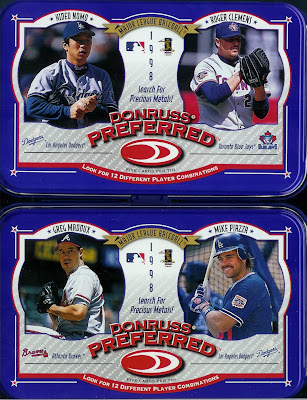 Hey guys, Drew back here. I'm about ready to grind out another week with terrible weather, snow everywhere, tons of schoolwork, and the typical everyday boredom that goes hand in hand with being a teenager. The things that keep my hope up for a good week is that 1) March is starting and that's 1 more month closer to the end of school, 2) Baseball is coming, and 3) I have a TON of TTMs out! Anyway, a post I've forgotten to post for a little while, are these 2 "boxes" (or tins, whatever you want to call them) of 1998 Donruss Preferred that my Dad gave me along with the 2011 Topps box a few weeks ago. They have a bunch of these for sale at my LCS, and I was a little interested to see what was in it, considering I've never opened a box from the insane insert era.
Each box has a combination of star players on the front of them, with 12 possible combinations. The 2 I got had Hideo Nomo and Roger Clemens, and Greg Maddux and Mike Piazza on the other. The box promises 5 cards per tin, and a search for "precious metals". Wonder what those could be. Well, let's see what the 2 boxes (combined) revealed: 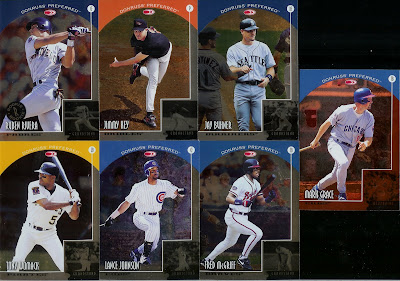 The first seven cards are the standard base cards, minus the Mark Grace which is probably a parallel to the base of some sort. They have an interesting design, mostly made up with foil, like any other late 90's product. All 7 are for trade if you want them.

These are pretty nice, very Finest-esque, and I like them over the rest of the cards. They aren't numbered, but they seem to be the main inserts. I definitely am a fan of the Pettitte card, and I'm keeping that one, but the others are for trade.

What do you think of the product? I give it a C, because it's just ok, and another one of those boring 90's products that don't provide the flair needed to be remembered. Thanks Dad for buying the boxes though!