Cards from the Blogosphere!

Hey guys, Drew back here. It's getting to that point that occurs once every week or two here at drewscards, and that would be mail day catch up time! I got 3 packages in since the last catchup, and all 3 were very helpful for me and awesome exchanges. First however, we start with the 2009 Blogger of the Year's package to me, Mr. Night Owl Cards.

Night Owl and I traded the basic team/set needs for team/set needs, and we both came out winners. First, he sent me 13 Topps Update cards for my set that slowly is being built, and those were really appreciated. 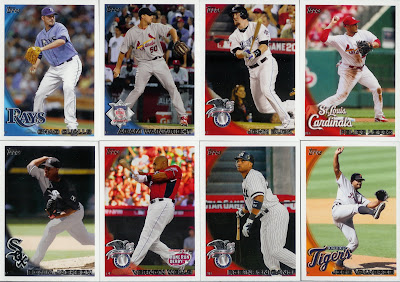 What a funky pose on that Valverde! 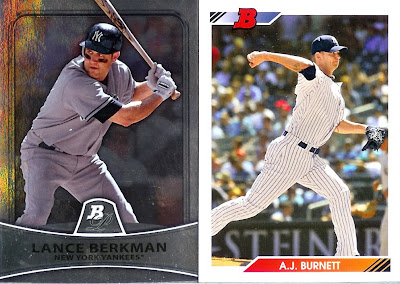 He also threw in a 2010 Bowman Platinum Lance Berkman, and a 2010 Bowman Throwback of A.J. Burnett. I needed them both and they're both very nice cards! 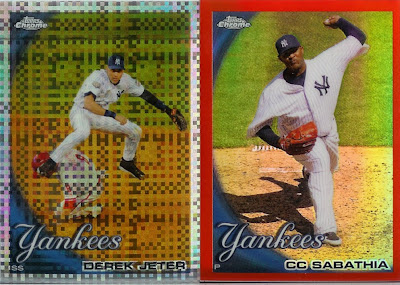 Lastly, 2 AWESOME refractors of Derek Jeter and CC Sabathia from 2010 Topps Chrome. I have a few variations of Jeter's Chrome cards this year, but this may be my favorite yet. Throughout all these years, x-fractors haven't gotten old to me yet. The orange refractor of CC (which scans like it's red) is also sweet. Chrome sets hadn't used a lot of orange yet, so it was nice to see a fresh color change. Both are un-numbered, but are sweet cards to add to the Yankees collection!

Thanks a lot Night Owl! Now onto the next package, this one coming all the way from Felix in Canada! Felix just started to buy boxes and get into the hobby, so he checked my wantlists and asked if I'd be interested in some cards off the list. Of course! 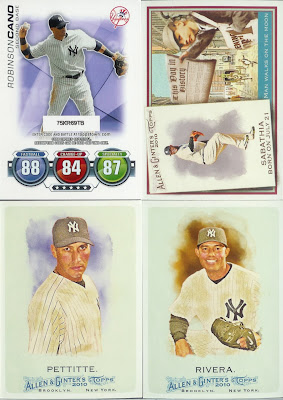 Starting off the bunch were 4 very nice cards of Pettitte, Sabathia, Rivera, and Cano. Looking back on 2010 Allen & Ginter now makes me feel that it was weaker than past versions of the product but still had some really nice cards, especially those two on the bottom row. 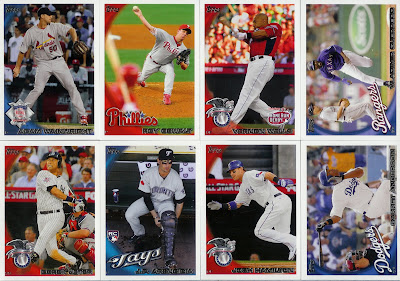 Felix sent me some 21 cards I needed for the Topps Update set, another huge help. As you may have noticed with the Wainwright card being in both trades, the set wantlists got a little mixed and I got maybe 2 or 3 doubles from these 2 trades, but that is absolutely no problem with me! I really like the Arencibia rookie card, that kid's gonna be good.

Thanks so much Felix and good luck with your collecting future! And, lastly, what would one of these posts be without a guest appearance by William of foul bunt. The most recent box he sent me included some stuff I need to help him out with and some CD's, but the best things were these 2 items: 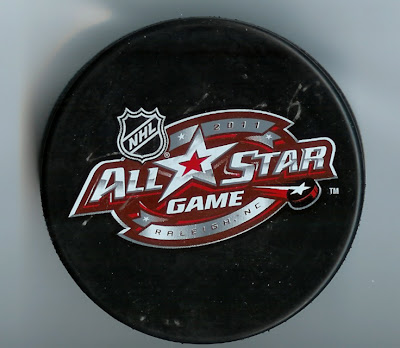 First, a commemorative puck from the 2011 NHL All Star Game! William went down to some of the NHL All Star events this year and got me this as a souvenir, which was truly awesome. This isn't just a puck however, it is also signed by one of the All Stars on the team! He's not too sure who the player is that faintly signed the puck, and the signature doesn't help much because the only part I can see is his number inscription. Our assumption is that the autograph is of Edmonton Oilers left wing Taylor Hall, but we're not really sure. I don't know much at all about hockey, but this is my 1st puck, so it's pretty cool! 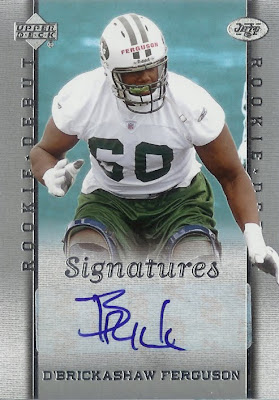 The final card in this post is this 2006 Upper Deck Rookie Debut autograph of Jets 2 time pro bowl offensive tackle D'Brickashaw Ferguson! He picked this card up for me at his former card shop just before it closed down, and boy I'm happy he did. Da Brick has a sweet signature, and is one of the best Jets on the team, so I'm very happy to own this card!

Thanks so much William! You're such a great friend, and I'll just add these to the never ending pile of awesome things you've given me over the years!

Well that'll just about do it for this edition of "Cards from the Blogosphere"! Thank you so much to the 3 of you that made this post possible! I couldn't have done it without you. I'm your host Drew, and I'll See Ya!
Posted by Drew at 10:36 PM