Hey guys, Drew back here! So about a week ago, Dad bought me a box of 2011 Topps to break, and I got really excited! A week previous to that, we went to the card shop to see if any Topps was in, but the snow had delayed it. Nothing could top a fresh box though! Well, I know this is gonna be a long post, so let's get it started with the product information:

Topps continues to have an addiction to plenty of inserts, especially to recycle the wonderful past designs of Topps history. That was supposed to be sarcastic. More on that later. Also, for the first time in a few years, we didn't have Turkey Red, which may have been a good idea to rest it a little. We've got a lot to break, so let's rip! 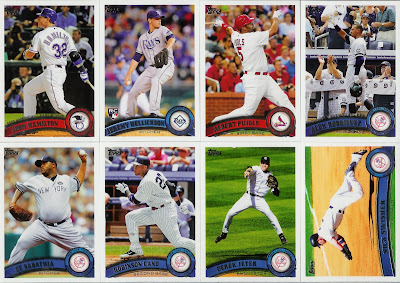 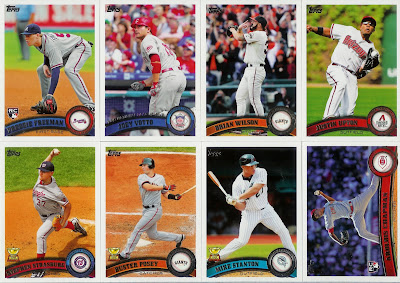 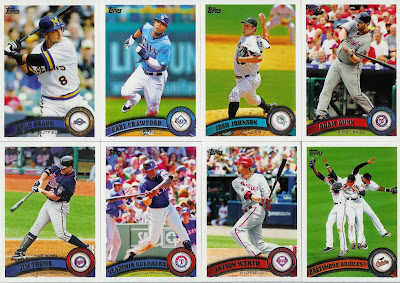 The base cards this year are ridiculously nice! A lot of bright action photos, many unique from one another, prove that Topps has obviously stepped their game up over the last 3 years or so. I love the Swisher card, probably my favorite of any of the cards I pulled, and only a little because of my bias towards him. I also really like the Brian Wilson base, mainly due to his amazing beard and intimidation he brought to the hitters in the postseason last year. 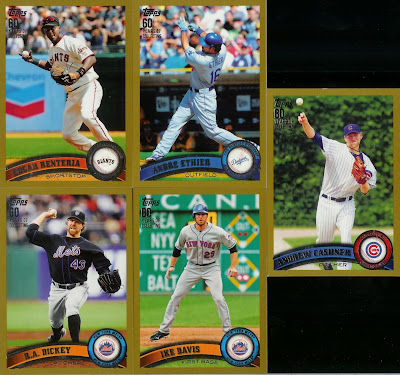 A staple of Topps' flagship brands throughout the years, the gold parallels are always pretty cool. This time I pulled a few Mets, iww. I think these cards are more rare this year than they have been in the past, so they may be trying to increase the value of them. 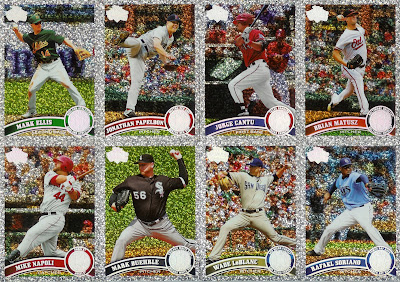 These cards have created some of the biggest buzz of all of the cards released in this product, and there's good reason why. These are really cool looking, and while an occasional blogger hates on them, I feel that they are the nicest cards in the product. I didn't pull the strongest group of players, but I didn't mind Mark Buehrle and Rafael Soriano. 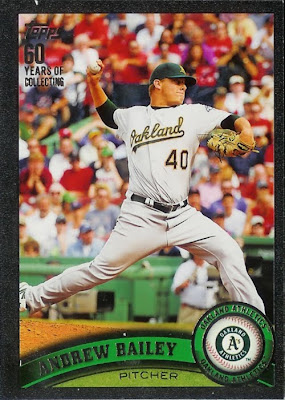 Oh man, that's nice. Not too bad of a pull, numbered 11/60 of one of my favorite closers in baseball. The card is off center but I love the black border concept, so this probably will be a keeper for me.
ToppsTown: 36/50 (72%) 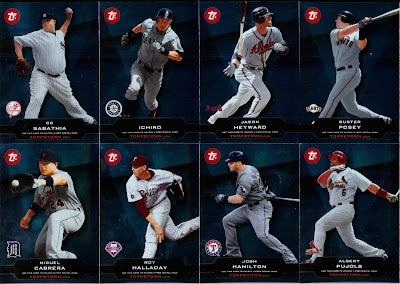 Topps, I know you really want to get kids involved in this, but coming from a kid (me), this insert set sucks. It's improved this year, I will say, but the concept, design, and boringness (if that's a word) is extremely stupid. I will beg and beg that these are gone next year. 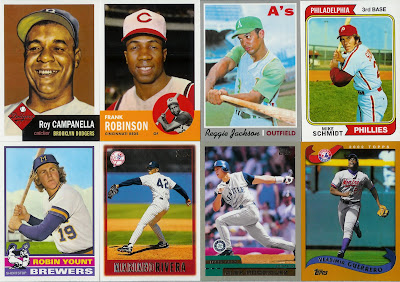 - Roy Campanella
- Frank Robinson
- Reggie Jackson
- Mike Schmidt
- Robin Yount
- Dennis Eckersley
- Greg Maddux
- Barry Larkin
- Mariano Rivera
- Alex Rodriguez
- Vladimir Guerrero
- Troy Tulowitzki
Ok, so what exactly are we supposed to do with these? Can't we just, you know, GET THESE CARDS? Instead of having to get some stupid "insert", either take this garbage out or put some buybacks in! I do like the Campanella one though. 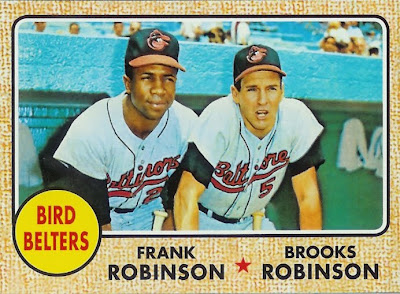 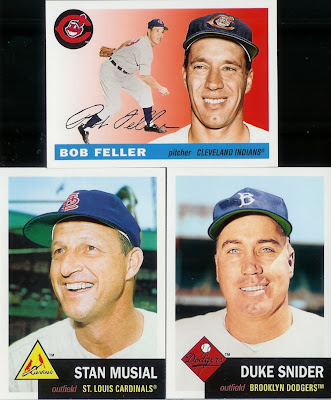 - Bob Feller
- Stan Musial
- Duke Snider
The difference between this set and the set I just showed is that these cards never existed. Topps maybe didn't have a contract with the players at the time or the set got cut off or due to some certain circumstances, these players didn't have cards in the sets they are shown in. The 3 I got I'm definitely keeping, I have autos of Feller and Snider and boy I wish I had Musial. I love the looks of the Feller card, I bet that would be a famous card if it existed. 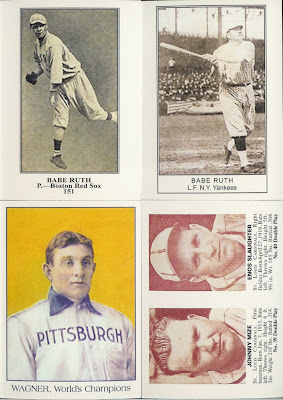 Apparently since Topps is the "Exclusive Trading Card of Major League Baseball", they won't have to worry about getting sued by other companies. Here they use a couple of the oddball sets from before their time, to show off some of the cooler vintage pre-1952 Topps. 1916 Sporting News was Babe Ruth's official rookie card, and it's extremely valuable due to how rare it is. We also see 1921 National Caramel, 1910 Tip Top Bread, and 1941 Double Play of these 4 cards. Interesting concept, but still, not really needed. 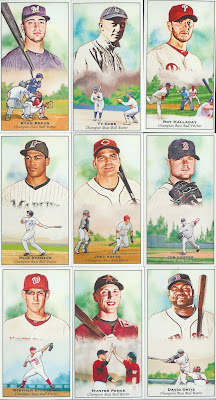 Now here is a cool insert set. I'm pretty sick of retro designs outside of Allen & Ginter, but these are a hit in my mind. These are modeled after the 1888 N184 Kimball Champions cards, and boy did Topps do a great job bringing these cards back to life. If I'm going to want to complete any insert set from this series, this would be the one. The backs are really pointless though, and they only show the checklist and card #. I'll probably be sick of these by the end of the year because we all know how great of a job Topps does at making us throw up by the sights of a legendary product gone haywire. 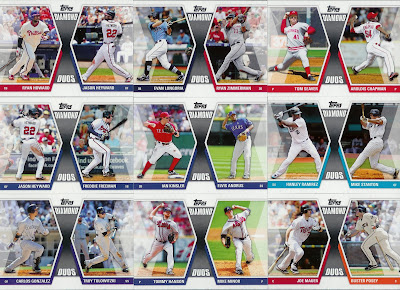 Our wonderful insert overkill continues with a set that looks EXACTLY like a pointless set from last year, but even worse! I liked the Legendary Lineage series from last year but it got worse as it went on, especially in the stat comparison they give for these combinations. Ryan Howard: 253 HR, 748 RBI, .279 average, Jason Heyward: 18 HR, 72 RBI, .277 average. What kind of comparison is that? Really Topps? Tom Seaver: 311 Wins, 3640 Strikeouts, 2.86 ERA, Aroldis Chapman: 2 Wins, 19 Strikeouts, 2.03 ERA. Wow... 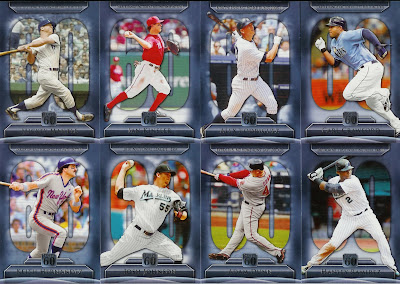 Alright, these don't look too bad. Not needed, but better than half of the other inserts we have here. I think a good idea would be to cut down the amount of inserts per insert set, because when they bring these sets through 3 products as a continuation, 150 cards is a RIDICULOUS amount of cards for an insert set. I like the Mantle and A-Rod but could really care less about the rest of them. 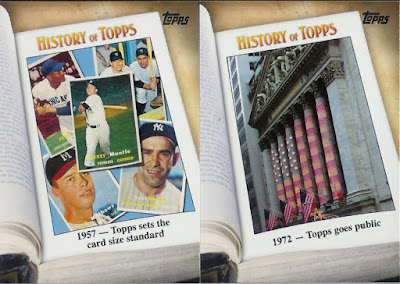 By far the WORST insert set I've ever seen. I NEED these out of my house. 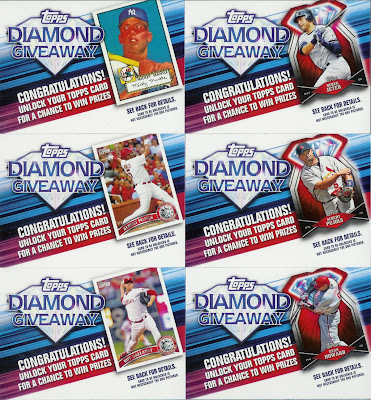 The concept of this is simple. Million Card Giveaway + Other Prizes= Diamond Giveaway. The cards you unlock with these could be 1/1 base parallels that you can order to receive in person. After you get your card, you get to dig up certain parts of a baseball field, and the parts typically give you a virtual ring, but you have chances to win more.

Of the cards, this 1967 Ron Herbel was the only card worth noting. But I did pull a sweet prize in the Diamond Dig...

Yeah, its a bad photo, but I dug up the 2011 Topps factory set! That means, for the cost of shipping, when this set comes out, I can get it for pretty much nothing! Wooooot! I may still build the set though, because, what else will I build for those months? I'm really pumped about winning this though. 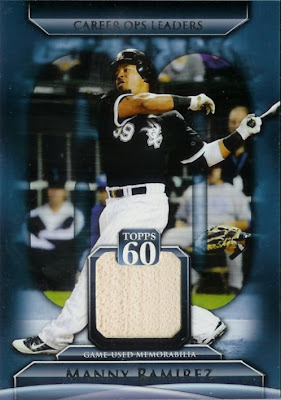 Manny is almost never a bad pull. Having played a lot of his career with the Red Sox and now joining the Rays, I have no clue why I still don't really hate him. I guess I've always liked his personality, and while he certainly doesn't look like he's exerting a lot of effort in games, he has fun and plays the game the right way- outside of steroids of course. This isn't the worst pull, but the value of this compared to the box retail value is just not there. This is for trade of an equal Yankee relic from the new product, but may be negotiable for something else.

Overall Thoughts: I'm a big fan of the new base design this year, but after that, there's not a whole lot more that I'm excited about. The Diamond Parallels and Diamond Giveaways are fun though, and I hope to win some more cool prizes in the future. I think the vintage reprints and stuff really need to be cut down on before they wreck the love we have for some of the greatest cards ever produced. I wouldn't be saying that if they hadn't done it also for the "59th Anniversary of Topps". Also, the duo cards should go, because if you include them as a set based off another design, out of what I pulled, there were 6 insert sets on old designs or concepts. That is sad. Be creative Topps! Even though there's no competition between companies, there's competition between good and bad in collector's minds, and if it's good, you make money, if it's bad, you make less money. Make it good. Grade: B-