Mystery Packs from eBay: Is It a Good Idea?

Hey guys, Drew back here. So one day I was just surfing around eBay looking to buy something nice for my PC when I came across a seller who was selling mystery packs. With Griffey Jr. autos and Hall of Fame relics galore, and 2 hits plus inserts for 6 dollars a pack (free shipping), I thought it was a great deal. It seems like out of the 50 packs made total, that I got 3 of the lower end packs. But was it still worth the price? Let's take a look: 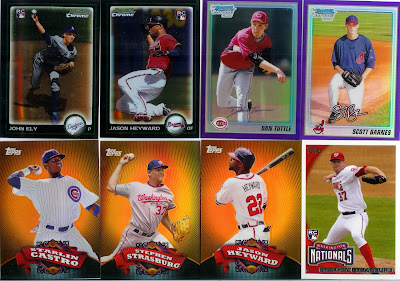 So, in addition to the 2 "big hits" per pack, you get a few nice inserts. I combined the 3 packs in this post, but anyway, I love the refractors. I think I liked some of these cards more than the hits. With 2 Strasburgs and 2 Heywards popping up, they made for a nice rookie group of cards, and I love the orange refractor cards, even though I've never seen them before and I have no clue what they are. The purple refractors are all pretty sweet too, even though I don't know these prospects. They are numbered to 899. 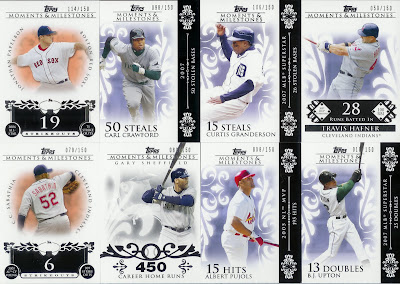 Next were 8 Moments and Milestones. It's kind of sad to consider these cards "inserts" just because they are numbered, because this was actually a base set and Topps' dumb concept to completely confuse us collectors. All of these but Sheffield and Granderson are for trade. 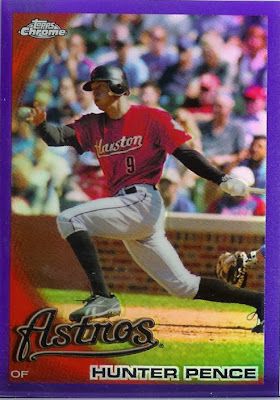 Here is a 2010 Topps Chrome Hunter Pence purple refractor numbered to 599. This is a really nice card, and I think Topps did a good job at bringing purple into the refractor rainbow, even though most people would normally think thats a terrible idea. Pence is a solid player, but this is also for trade. 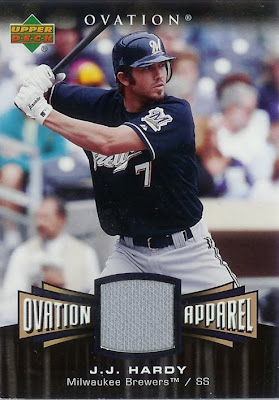 TIME FOR THE INSANE MOJO!! Here we have an unbelievable looking 2006 Upper Deck Ovation JJ Hardy gray jersey card! Wow! In all honesty, this is a pretty awful hit to start it off. Don't worry it gets better, I guess. 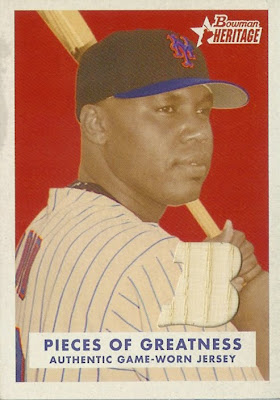 Ok, it's not getting much better. Nothing better than a 2006 Cliff Floyd bat card! For trade. 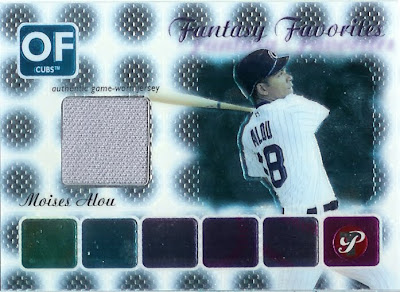 From 2004 Topps Pristine, a Moises Alou jersey card. While Alou was a very good player, and this card is way nicer than the first 2 hits shown so far, the value of this card is close to nothing. Relic overproduction? Maybe, but this is just boring. 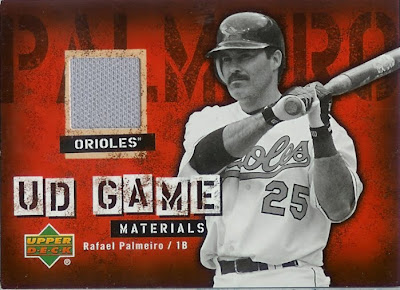 Continuing on our journey from junk relic to the next, this is a familiar face in my collection. A 2006 Upper Deck Rafael Palmeiro relic. Again, a great player, but this is just boring! The funny thing is that I actually owned this card, but traded it away a long time ago to William, so now, I have it again. And its for trade. Again. 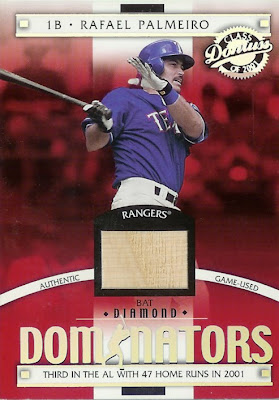 Woah, Rafael Palmeiro again? I haven't seen you in a while! From 2001 Donruss, a bat chip of his numbered to 550. Yawwwwwwwwwwwn. 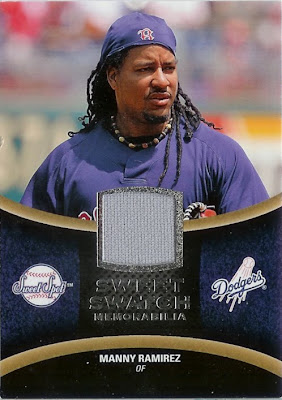 Almost done here guys, don't worry. Here's a 2008 Sweet Spot Manny relic. One of the biggest collector pet peeves is used here, and I bet it stands out nice and big to you right now. Red Sox uniform? Dodgers logo? No, Upper Deck, what were you thinking? 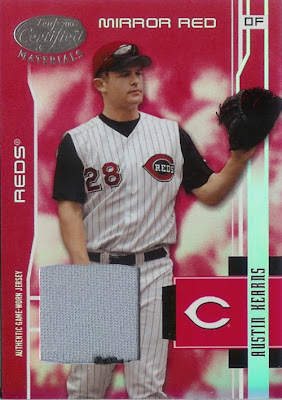 The final card is 10x better than any of the above cards, because of the tiny black piece of patch in the corner of the relic. The card is of ex-Yankee Austin Kearns, numbered to 250 from 2003 Leaf Certified. This is a sweet card in person, so I think I'll hang on to this for now.

So I think the most valuable thing I bought with this purchase outside of lots of trade bait was a lesson. A lot of sellers do a great job of showing off the stuff that have horrible odds, and you get sucked right in. I can't be the only one to do this, right? Do you guys think this heap of junk was worth $18? An average blaster produces 1 relic and like 5 inserts, so this owned those odds, but I think I could've done better with that money. Whatever, you live and learn.

Have any of you guys tried "mystery packs" out? How did you do? See Ya!
Posted by Drew at 9:32 PM