Hey guys, Drew back here! Over the past few days, TTMs have been starting to roll into the mailbox, and it hopefully is the start of awesome things to come! Unfortunately, the first one was a great auto but a bad environment surrounding it. Take a look: 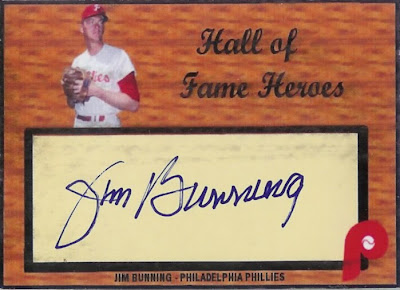 So, first of all, it's an awesome looking Jim Bunning autograph on a Hall of Fame custom! The 9 time All Star and Phillies great took his time to sign the card for me in only a couple of days, which was very cool. Sadly, the mail wrecked up the card and if you can tell, there seems to be roller marks or something odd right above the auto as well as a little below the auto and on the sides. I love this auto, but I'm really disappointed about the card. I'm planning on writing Bunning another letter, explaining what happened and hoping I can get a nice clean auto this time around. Wish me luck on that one.

While Bunning was the best player out of this trio, these successes may have been a little nicer due to better condition of the cards. 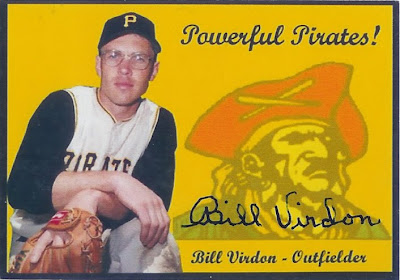 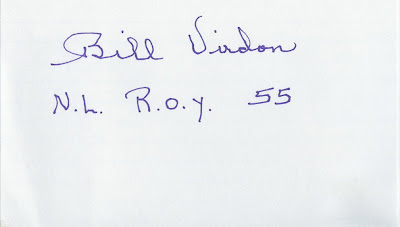 Next we have a nice success from former Pirates center fielder Bill Virdon! Virdon was the last of 4 1960 Pittsburgh Pirates World Series Champs that I recently sent to that I got a success from, and while it took 18 days, a little longer than the rest of them, it was still a very fast success. In 12 seasons in baseball, Bill recorded 1596 hits, in 1583 games, with a career batting average of .267. As you see on his awesome index card inscription, he was the National League rookie of the year in 1955, after batting .281 with 17 home runs, 68 RBI, and 150 hits with the Cardinals.

After his playing career, Bill managed for the Pirates, Yankees, Astros, and Expos, for a total of 14 seasons, and a winning percentage of .519 (995-921). So, a pretty sweet success from a baseball great, with 2 great autographs.

Moving right along to our final success, I actually received my 1st 2011 Spring Training TTM back already! After being in camp for less than a week, this guy already received, signed, and sent back my 2 cards I sent him. 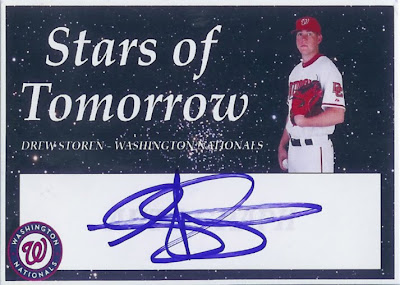 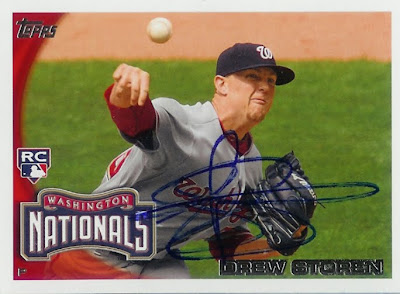 Washington Nationals closer Drew Storen signed my cards for me, and while his autograph is wild, I think it's pretty cool looking myself. At a young age of 23, Storen took on the relief role for the Nats last year, and was a very underrated rookie due to well, you know, that Strasburg guy. He went 4-4 with a 3.58 ERA, and saved 5 games for them. From what it looks like, Drew will be the closer for them this upcoming season, and I wish him the best of luck! He took 9 days to sign these cards for me and gets the special honors of being my first of hopefully many many more Spring Training TTM successes!

What do you guys think of the new autos? See Ya!
Posted by Drew at 8:02 PM