Hey guys, Drew back here. Just yesterday I received my 40th Through the Mail autograph success! To say I'm addicted to that aspect of the hobby is an understatement, as I am printing customs like never before and I'm very stressed out right now in this hobby I'm supposed to love. Don't get me wrong, I certainly love the hobby, but when I'm working on preparing about 30 autograph requests for spring training, it's not fun! However, the best part about this hobby is you can work and work and work but it'll sure the heck pay off! It sure did here, and it was one of my fastest returns yet. Check it out: 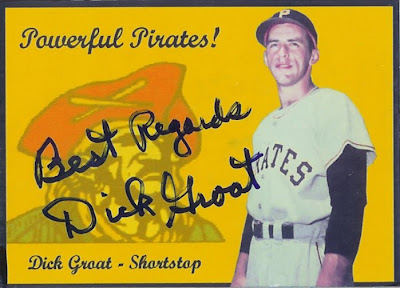 Former Pittsburgh Pirates Shortstop Dick Groat signed a custom for me! In his 14 career MLB seasons, he spent 9 of his seasons with Pittsburgh, and was an 8 time All Star. He won the 1960 NL MVP Award with a .325 batting average that season, and was part of the team that beat the Yankees by one swing of the bat by Bill Mazeroski, one of the most famous games of all time. The MLB Network recently ran a special airing of that famous game live in Pittsburgh, and Groat, Vern Law, Bill Virdon, as well as many Pirates players and Yankees (Bobby Richardson) were there and interviewed about the game as it progressed. It was a really cool show, so I decided to reach out to a bunch of them for TTMs. You should see more Pirates in the near future!

Groat also played basketball in college as a guard for Duke, and was elected to the National Collegiate Basketball Hall of Fame in 2007. In 1951 and 1952 he was an All American, and was even drafted by the Fort Wayne Pistons in the NBA Draft, and played one season for them (1952-53). So, you can say he was a great 2 sport player for sure!

He signed one custom card for me, inscribed with "Best Regards", in a total of 6 days. Wow! I'm pretty happy I got this success, and I highly recommend him to you for a future TTM request if you haven't gotten him already. One of my fastest returns yet, and a beautiful signature!