Hey guys, Drew back here! This post marks the 800th post from me in this blog's history! It's been a long journey, ever since December of 2008, when I wasn't even a teenager yet. This blog has become a part of me that can never leave me, and I couldn't have done it without you. For the first few months, it was hard to get readers, but once I did, there was no stopping me from continuing to share my new additions and thoughts on sports. Since the beginning of this, I have added probably a good 40,000 new cards to my collection, a lot of it coming from all sorts of places around the world, from you readers! And while I've had a lot of trouble getting packages ready on time because of school work, I never get the page long rants from people complaining about where their cards are, because you're all the best! I've made not only a few new acquaintances from this but also a few great friends, and yes I am talking to you Will! So, I just wanted to say thank you to everyone who has kept me consistent and going strong from the past 2 years in this wonderful addiction!

Anyway, I don't have anything super special to show off here, other than a few pickups of 2 players that kept me going with the blog over the past year and a half or so. First off was a nice eBay pickup I bought maybe a month ago now, but I've been waiting for this post to show it off. Nick Swisher has been my favorite player for a little while now, and even though his signature is one of the worst ones I've ever seen, I never get tired of it. A lot of people would say I have a man crush on this guy, and I guess they'd be right. 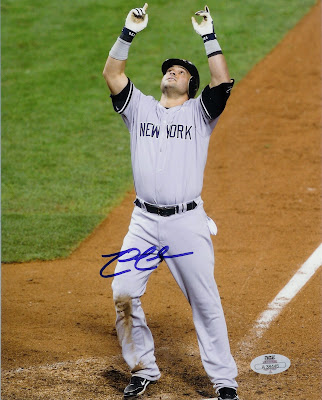 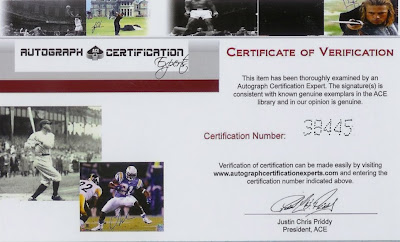 This 8x10 autograph of Nick is my 1st item larger than a card that I own of him that is signed. It was a fairly cheap piece, and I liked the photo a lot. Now my 8th autograph of Swish, and one that will certainly get hung up on the wall as soon as possible! The certificate from ACE seems to be legit, but I don't know much about the company, so if anyone knows if it's a good certification company comment and let me know. 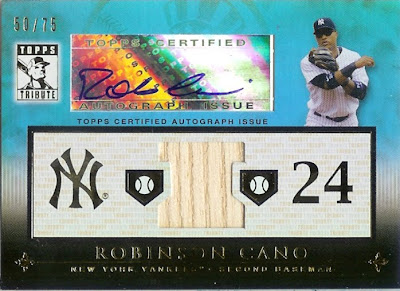 And how about this bad boy! From 2010 Topps Tribute, a Robinson Cano bat autograph numbered only to 75! This card has quite the story, because I actually had bought it months ago and it got lost in the mail. However, some nice guy said he found the package ripped up lying around, and he shipped it to us! The seller gave us a refund a long time ago, so this was almost considered a gift. Oh, and while this card now sells for a solid $40-60, I got this for about $15 when I had originally bought. Wow. This card is now one of my favorite Canos, and at this point it could be my last auto of his for a while, due to his ridiculously high value and stock going into the 2011 MLB season.

These 2 cards are enormous additions to my 2 big PC's, and while I am soon ready to introduce the next 2 players I will try to also focus on, these 2 players are always on top of my want list.