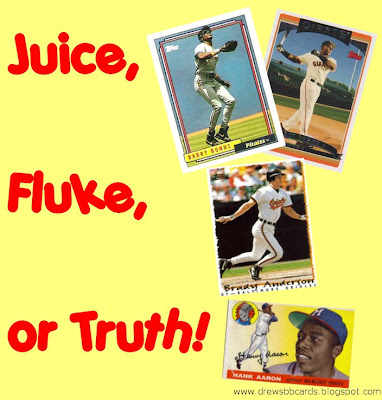 Hey guys, Drew back here. I've got a new game for all of you, I don't know how often we'll play, but the idea started when I recently bought a nice new card on eBay. First, I'll let you check out the card: 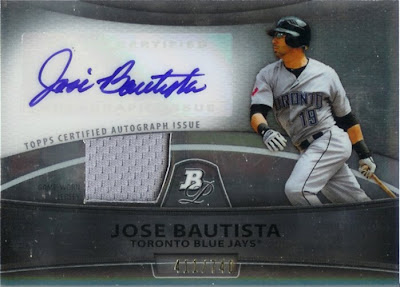 From 2010 Bowman Platinum, a Jose Bautista auto relic card! For about maybe $8 shipped, I felt like it was almost necessary for me to pick it up. It looks much better in person, with a lot of shine and rainbow. Numbered to only 740, this isn't the most rare card I've seen by any means, but after his monster season last year, why wouldn't I even bother to question my purchase?

Obviously he had a monster year, but unfortunately in today's age of baseball, we need to question: Juice, Fluke, or Truth? So I ask you, what do you think? To clear things up for all of you that don't understand, juice refers to using steroids during his big year, fluke means that he's a one year wonder, and truth means he's here to stay. Vote in the poll below and feel free to leave comments as to why you feel that way.

In my opinion, its hard to tell. Adjustments can go a long way, and if I had to choose, I think he's just a fluke. I'm not sure how I'll fare with that answer as the year goes on, but I hope I'm right or else the Yankees are gonna have to be prepared to get beaten badly by him. I like him for now, because he led me to the fantasy baseball championship! And the card isn't for trade