Hey guys, Drew back here. Upper Deck recently gave me my Harold Baines redemption autograph that I redeemed in July after a birthday gift, but that wasn't all. Just a few days ago, I received another shocking package from the good folks from Carlsbad, California! They sent me another letter, and it seems to be that there was confusion and they accidentally sent me the actual card plus a replacement. Here is the new card of equal value that is slowly adding up to the price of the actual box. 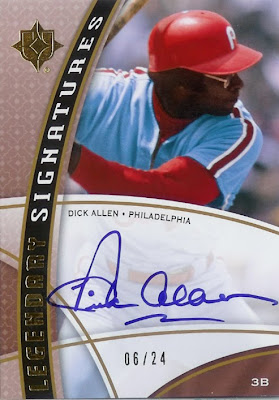 From 2009 Ultimate Collection (my 1st card from that set), an on card autograph numbered to 24 of former All Star corner infielder Dick Allen! Allen was a 7 time All Star, and played mainly for the Phillies, as well as the Cardinals, Dodgers, White Sox, and A's. He was the 1964 NL Rookie of the Year and the 1972 AL MVP! I read through his entire Wikipedia page, because I will admit I barely knew anything about the guy and was a little disappointed. But after getting into his outrageous power and run producing ability, I grew to really like this card!

This is one of my lowest numbered autographed cards, and it's really an amazing looking card. The autograph of Allen looks incredible, he has one of the sweetest sigs I've seen, and I'm a fan of the Ultimate Collection product! For basically free, I'm pretty pumped about adding an autograph of his to my collection! If anyone wants this more than I do, give me a Yankee autograph similar in value (or more value :D) as this card, and it could be yours. Otherwise, I might just hang on to it for now.

So, all in all, Upper Deck's customer service still kinda sucks for taking so long, but at least they were able to help a good customer in the long run! Thanks UD!