Check Out My Cards Pickups

Hey guys, Drew back here. Over the past few months, I've done a lot of buying on Check Out My Cards.com. It's a great website for buying and selling cards, and is a nice alternative to eBay. I bought a Christmas gift which you will soon see if you read foul bunt, and I bought myself 3 other cards for my collection. Here they are: 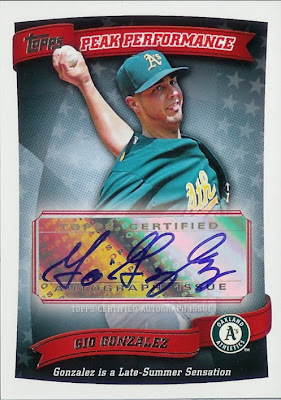 First, I picked up an auto of A's young pitcher Gio Gonzalez. Gio has been a pretty good pitcher throughout 3 seasons, with a record of 22-20 and a just over 4 ERA. He was touted as a top pitching prospect and was included in deals that sent Jim Thome to the White Sox, and what sent my favorite player Nick Swisher from the A's to the White Sox. Gio has been one of many young stars on Oakland, and I'm predicting a breakout year this upcoming season. For about $4, I figured why not, and took it. 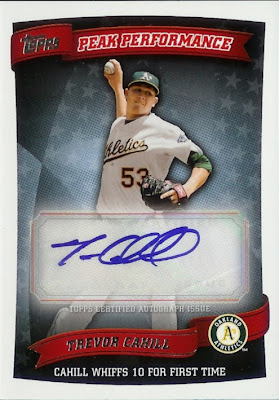 This A's pitcher has a lot better resume thus far into his career, and was in talks for the 2010 American League Cy Young Award. Trevor Cahill had an 18-8 record last year with a 2.97 ERA, and his career win-loss is 28-21 with a 3.76 ERA in 2 seasons on Oakland. He made the All Star team last year, and is regarded as one of the top young pitchers in baseball. This card was maybe $5, so I got two A's young guns autos for less than 10 bucks. 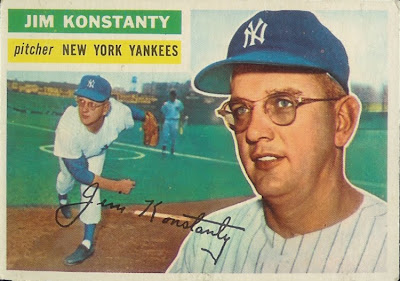 So on my baseball team last year, we had a kid named John on it. He wasn't the best player by any means, but he certainly kept us entertained and was a great teammate of mine. His grandpa is former Reds, Braves, Phillies, Yankees, and Cardinals pitcher Jim Konstanty. Konstanty was the 1950 National League MVP and was selected to the All Star team that year. He won 16 games that year for "The Whiz Kids" and saved 22 games. His career record was 66-48, with a 3.46 ERA and 76 saves. He died in 1959 in Oneonta, New York, not too far from me. I saw this card of him in a Yankees uniform, and for a few bucks, I knew I had to pick it up for the Yankees vintage collection!

Overall I'm happy with these purchases! If you haven't checked out Check Out My Cards, please do! It's highly recommended!

And lastly, I have 2 quick plugs, first for my boy William over at foul bunt. Today, after sending Mr. Virgil Trucks a Christmas Card, he received one back with Truck's phone number. He arranged an interview with him and is interested in any questions that you may have to ask Mr. Trucks about our hobby, or baseball in general! Please head over there and see if your question is chosen and answered by former pitcher Virgil Trucks!

The second plug is for Anthony, who currently runs a blog based upon Women's Professional Soccer and Vietnam War memorabilia. He is trying to get rid of most of his old baseball card collection, consisting in a lot of Mets cards as well as other nice relics, autos, and signed photos. I'd definitely take a look, you can trust him for sure and all of the memorabilia/autos are real! Let him know I told you about it, and I'm sure he will give you a great deal! I just bought something off him, and you'll see it on the blog once I get it! So, PLEASE, check out his old blog today and see if there's anything you would like!