A Lot of Great Catch Up Mail!

Hey guys, Drew back here. It's that time again folks, the one where I have to show off all of the recent trades and acquisitions I've made with bloggers recently, because I'm too lazy to do them all separately! So, here goes, starting off with a package from Dan of Grand Cards. Dan was a Curtis Granderson supercollector during his stay on the Tigers until he was traded to the Yankees, and he decided to throw in a ton of Curtis' cards along with the trade itself. 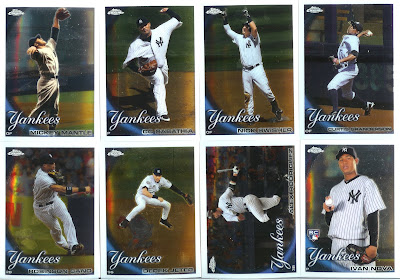 The trade was for these cards above as well as the rest of the 2010 Topps Chrome Yankees set. My dad gave me the entire Chrome set for Christmas this year, but it certainly doesn't hurt to have all the Yankees separate from the set. My favorite cards in the set are probably Mantle, Cano, and Jeter, all 3 being very nice cards! 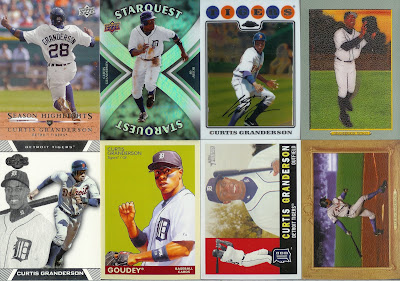 And here are just a few of the tons of Granderson cards he included! Granderson has been on a lot of really nice cards over the years, and I needed quite a few of these. I'm actually considering becoming a Granderson collector, to add to my Cano and Swisher collections. I have a lot of his cards now and he's a great young player! 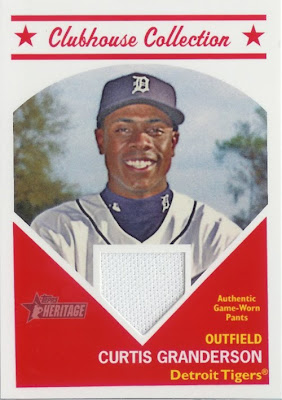 But wait, there's more! Dan also felt like it was right to include this nice 2008 Topps Heritage Pants relic card, which was awesome! While I'm not the biggest fan of owning a piece of someone's pants, it's still a nice relic, and will fit in well with my other Granderson cards!

For the next package, we have stuff from Jim of Sixty Feet Six Inches. Jim wanted my Johnny Venters autograph from my Topps Update Jumbo break I recently did, and so he sent me these in return:

First, Jim threw in these extras. From the 2005 Upper Deck All Star Game Series, 2 Derek Jeters and an Al Kaline/Ivan Rodriguez. This is a pretty nice set! 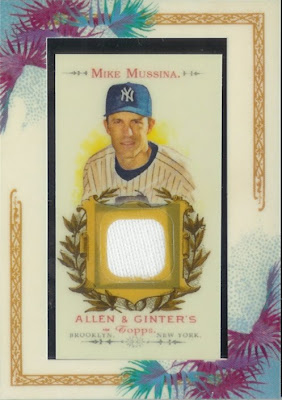 From 2007 Allen & Ginter, a Mike Mussina white jersey relic. I've gotta say, this is a gorgeous card, everything about it was done well! Allen & Ginter relics tend to be my favorite design year in and year out and this is just another of a former Yankee great! 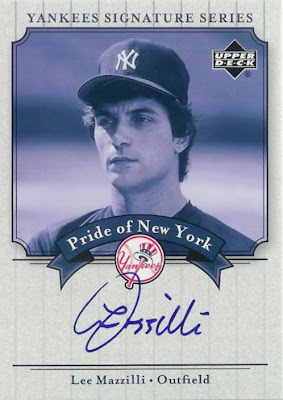 And lastly, the main highlight of the trade was this 2003 Upper Deck Yankees Signature Series Lee Mazzilli Autograph. I've been meaning to pick up a card from this beautiful Yankees auto set for a while now, and I finally have my hands on one! Mazzilli only played for the Yankees for 1 season (1982) and didn't have the greatest numbers for his career, but he was also the manager for 2 mediocre Orioles mid-2000's teams. He was also the 1st base coach for the Yankees from 2000-2003 and the bench coach in 2006, and was the lead studio analyst for the Mets SNY coverage a few years ago. It's safe to say that lee has covered a lot of ground in his long baseball career. Anyways, a nice auto and a nice card, sweet!

Next up is a nice Christmas gift I recently received from Ryan of "The Great O's Autograph Project". He told me he was going to send me some stuff and boy I guess he did! 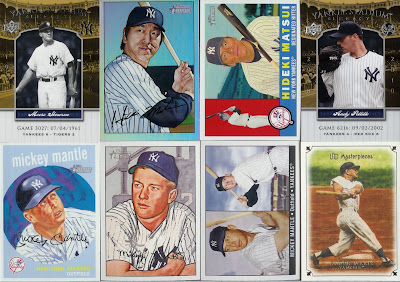 Of the huge lot of Yankees cards he included, I only scanned my favorites. On this first scan we have a lot of sweet Mantles, and by far my favorite Roger Maris card I've ever seen. I also really like the Matsui Bowman Heritage refractor card, minus the fact that it's very miscut. 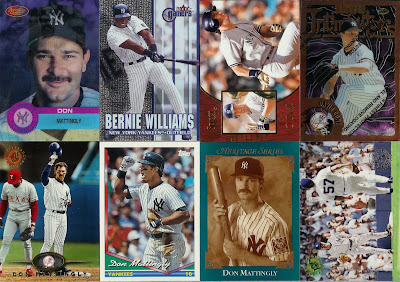 Here we have quite a few Don Mattinglys along with a few other 90's inserts of Bernie, Paul O'Neill, and a sweet Topps Finest David Cone. All of the Mattinglys pictured were needed and are all really nice cards, especially the 1992 Leaf Heritage Series Insert and the 1995 Topps Stadium Club. Starting to really get quite a nice Donnie Baseball collection! 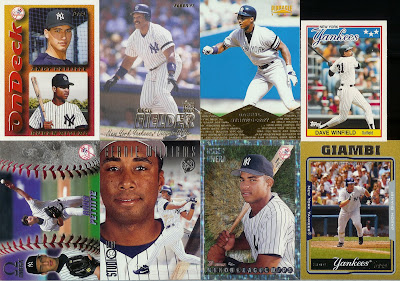 Lastly, a 2005 Topps gold card of Jason Giambi /2005, and a whole lot more of 90's inserts and base. We have the 1995 Andy Pettitte/Ruben Rivera rookie card, and also a really shiny Ruben Rivera rookie! I really like the Bernie Williams card too, another nice one I needed.

And before I move on to our final package, I want to say that Ryan is holding a contest on his blog "The Great Oriole's Autograph Project" giving readers a chance to win a sweet looking Earl Weaver autograph! Please go check that out if you haven't already!

Finally, last but not least is yet another package from Mr. Virgil Trucks Interviewer himself, William from foul bunt. As you know by now him and I are really good friends and he recently picked up another nice card to send my way as well as a copy of his interview with former pitcher Virgil Trucks! Here are the cards he sent my way: 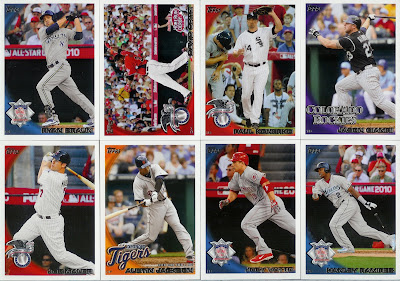 Here are 8 of 29 Topps Update cards I needed, that he decided to hook me up with. Unfortunately, I shouldn't have to have needed these cards, as the jumbo box should have provided most if not all of the set, but the doubles pile is overflowing. For some reason I really like the Giambi card. 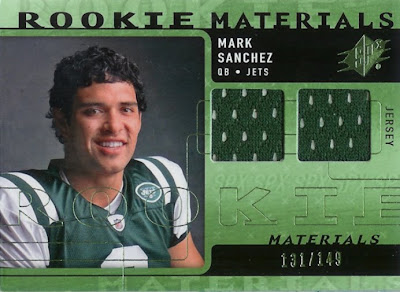 And what better way to end this post than a sweet Mark Sanchez dual jersey /150 from 2009 UD SPX! I never got a chance to post about the Jets heartbreaking loss against the Steelers, and while I am angry that we didn't show up for the 1st half, I'm glad the team made it far, and Sanchez hasn't been too too bad in his first 2 seasons by any means. This is a beautiful card and even though the relics are event used, it's still worth staying in my collection for sure!

So, I want to thank everyone who made this post possible, I got some really nice new additions, and I love them all! Thank you so much guys, it really means a lot that you are willing to feed my addiction, and I gotta get you all back!