Hey guys, Drew back here. I've been trying to get back to my regular posting schedule but that school stuff always tends to come first and get in the way of that. Because of my studying and preparation for midterms, I won't be able to post much for the next week. However, I've gotten a TON of awesome stuff lately that I wanna share with you. I'll start with a TTM I got back yesterday, one that I thought would never come back. 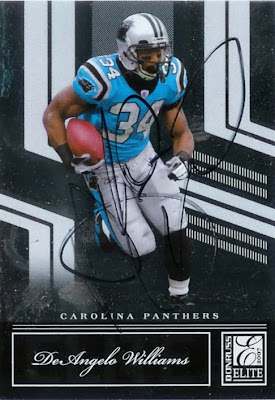 None other than Panthers running back DeAngelo Williams! As awful as the autograph looks, I'm just reluctant for it to come home and be in tact. I sent out in August, so it wasn't too long ago, but rumors spread that he was done signing through the mail so I got a little worried. Sure enough immediately after the season ended the card came back signed! It took 160 days but was completely worth the wait!

DeAngelo is a 1 Time Pro Bowl running back, that coming in 2009, and he has rushed for 30 touchdowns since his rookie season in 2006. He's a great player, part of a great tandem when healthy with Jonathan Stewart. This season, he only lasted until late October, after spraining his foot. Stewart took over and rushed for 770 yards and 2 touchdowns on a weak Panthers team. Williams will be a free agent this year, so we shall see if they keep him or dump him.

I'm actually surprised the card came back ok, because I opened my mailbox to find a completely wrecked envelope, yet the cards were in there perfectly. Either thats what happens to old envelopes or someone wanted to take a peek at my mail. I always thought that mailman was suspicious!

Have you ever received a possibly tampered bubble mailer, envelope, etc?