Hey guys, Drew back here. After a day dedicated to track, and being at a meet for 9 hours, and running for a grand total of 70.5 seconds, I am back. So, 2 weeks or so ago I bought an awesome picture on eBay, and it totaled out to around $30, which was a nice deal for his autographs! He is one of the bright stars of football and has taken his (and my) team to the AFC Championship for 2 straight years! Ladies and gentlemen, Mark Sanchez paid a visit into my collection! 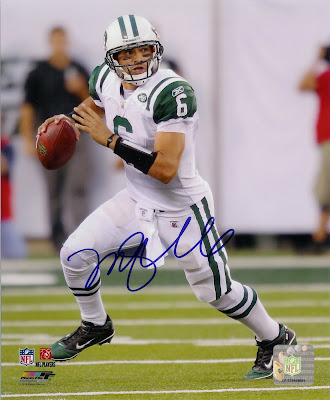 First off, I absolutely love the photo of "The Sanchise". It is a perfect picture to display an autograph, and the autograph, as much of a disaster as it is, looks great on the photo! Now, here's the question, is this beautiful piece real? 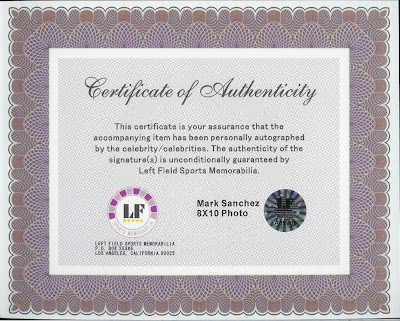 It's no big name company, but it sure looks official. A matching hologram is on the back of the photo, and it sure seems like either it's real or a REALLY good fake. Sanchez seems to have a few similar yet a little different autographs, and this is one you see on a lot of his cards. On their website, it does say that all items were obtained in person or were from Steiner Sports, Tristars and Mounted Memories. Also, the company is from Los Angeles, California, the state in which Sanchez played college football in. Sounds pretty legit to me!

As of right now, Mark Sanchez is my favorite football player. He has showed a lot of positives, as well as negatives, but the team has been successful when he's on the field and he is great in a lot of clutch situations. That being said, in tonight's game against Pittsburgh he sure is going to have to be clutch in order for the Jets to win! I think the Jets are riding an awful lot of momentum right now and if they can control their minds from thinking about the Super Bowl and just trying to win, they can most certainly do it! I'm a little confident, but then there is that little feeling inside me that says "DREW YOU'RE A JETS FAN YOU CAN NOT BE CONFIDENT!" I hate that feeling, but it's truth. The Jets have famously choked an awful lot since that great Super Bowl 3.

I can't wait for tomorrow night, hopefully my boys will be heading to Dallas awful soon!