Hey guys, Drew back here. For Christmas, Pop Popps gave me a nice lot of cards, and there were some sweet cards in there. Take a look: 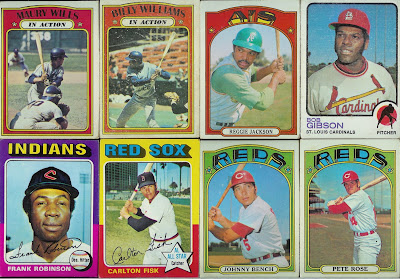 First off, we have a bunch of Hall of Famers, and a Maury Wills "In Action" card. I've gotten quite a few of these from him before, but you can never have enough vintage HOF'er cards. 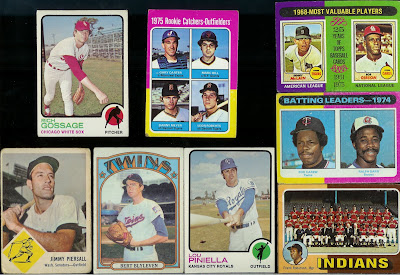 And, we also have a 1975 Topps Batting Leaders card featuring HOF'er Rod Carew, an Indians team card with Frank Robinson as manager, and a 1975 Topps card showing the MVPs of 1968, which happened to be 2 pitchers, Denny McClain and Bob Gibson. We also have a few more vintage cards including a 1963 Fleer Jimmy Piersall and a Blyleven and Piniella. Sometimes Pop Popps tends to have mixed early-mid 60's cards in the lots, and I got 3 1963 Fleers this time. Finally, 2 sweet Hall of Fame Rookies, of Goose Gossage and Gary Carter! I already have a few of the Gossage rookies, but I did not have the Carter rookie yet, which will certainly stay in the mini Hall of Fame Rookie Card Collection.