Hey guys, Drew back here. So, the day I received my DeAngelo Williams TTM auto, I received quite a few other things in the mail. One was a surprising package from the folks at Upper Deck. I've been very upset with Upper Deck's Customer Service lately, because for my birthday, IN JULY, my parents got me a tin of 2007 Upper Deck Sweet Spot Classic. In it I received 2 base cards of Gus Zernial and Bob Horner, 2 relics of Dennis Eckersley and Fred McGriff, and an expired redemption for a Harold Baines Sweet Spot autograph. I contacted Upper Deck on the redemption, and they did not have the card, so they said they'd get me a replacement and told me to wait the standard 8-12 weeks. Then, I emailed them 12 weeks later asking where my cards were, and they told me to wait 8-12 MORE weeks. Well, I waited 24 weeks (aka 6 months) and Upper Deck FINALLY came through, when we were about to call and complain. Here is what they sent me: 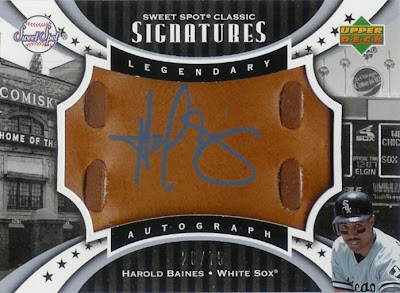 Nothing like a Harold Baines autograph as a replacement for a Harold Baines autograph. I mean, I can't complain considering this was the card and it's really nice, but I was kinda hoping for a nice Yankees card to add to my collection. Baines was actually better than most think he was, one of the more underrated players of his time. He played for 22 seasons with many teams, had 2866 hits, 384 home runs, and a career batting average of .289. He won a world series as part of the White Sox coaching staff in 2005, after going his entire career without a ring. Had he played for better teams, he may have had more consideration for the Hall of Fame, and would fit with the Jim Rice's and Andre Dawson's of his era.

This card on the other hand is really nice. It's numbered to 75, and the auto is on the glove in blue sharpie, which makes for a nice layout. For now, I'm planning on keeping this, but if you have a similar Yankee autograph I may be willing to trade it.

Thanks Upper Deck, still not a huge fan, but we all do miss you.