Hey guys, Drew back here. So, it's becoming a tradition every year for Dad to go out of his way and go Craigslist crazy for my Christmas gift. He loves getting lots of cards and hoping for nice finds, which we certainly have found in the past, the best being a 1980 Rickey Henderson rookie card. This time, he got 4 sets, a 300ct box of Yankees, a few Hall of Famer autos, and a good 17 relics. I didn't wanna overload you guys on scans, so I made one of those video slideshows for the first time in a long time. Check it out!

I will show you scans of the two biggest cards in case you couldn't view the video. On top of the box were 2 Hall of Famer autographs, and they were of Orioles Great Jim Palmer and Dodgers Great Duke Snider! I got Snider TTM but this is a sweet addition to the Hall of Fame PC and I did need Palmer which was cool. Both were from the Nabisco All Stars set, which is a really cheap and affordable set for Hall of Fame autographs! Each card comes with a certificate of authenticity, and they display nice photography. I own the Brooks Robinson, Frank Robinson, Duke Snider, Jim Palmer, Bob Gibson, and Catfish Hunter autos from this set now, and I don't know if I'm done yet! 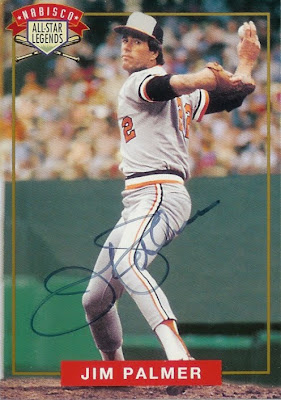