Hey guys, Drew back here. Every once in a while, I like to branch out my collection a bit. It seems kinda boring to continually just add cards and occasional signed photos to your collection, so when I have the opportunity to mix things up, I very well might. So just recently, my good friend Anthony from the blog "Anthony's WPS and Vietnam Collectibles Blog" and formerly "Mike Pelfrey Collectibles" has been working on selling off his entire collection, including his incredible Mike Pelfrey cards. I've done a lot of business with him, and this just happened to be probably the best pickup yet! For a great price of $10, I got this wonderful new addition to my collection: 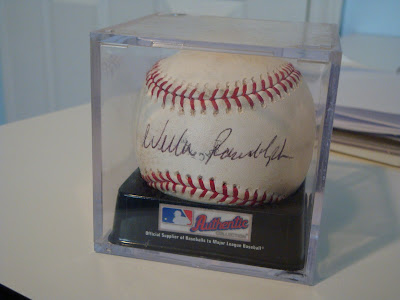 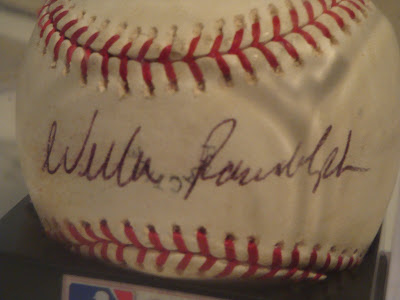 Anthony went to a Mets game about 3 years while former Yankees great Willie Randolph was manager. Randolph picked a ball off the ground, signed it, and tossed it up to Anthony in the stands! A stamp behind the autograph says Practice upside down, so obviously the baseball was used by either the Mets or the opposing team that day, which is really awesome. The ball is signed nicely on the sweet spot, and looks pretty nice in person! The baseball also has a lot of wear and dirt on it too, which is much cooler than a plain white baseball.

Willie Randolph was a great player back in the 1970's and 1980's, and was most known for being on the "Bronx Zoo" team featuring Reggie Jackson, Thurman Munson, Lou Piniella, Bucky Dent, Chris Chambliss, Graig Nettles, Catfish Hunter, Sparky Lyle, Goose Gossage, Billy Martin as manager, etc. He was a 6 time All Star and a 2 time World Series Champion as a player. He was a key role player, with a great glove and great speed, often near the top of the lineup behind Mickey Rivers. After playing for several other teams and following his retirement, he was the base coach and bench coach throughout the Yankees incredible World Series run in the late 1990's. He spent 2005-2008 managing the Mets and was fired, and now currently will become the bench coach for this years Orioles!

He's certainly lived a life in baseball so far, and I'm a big fan! I'll make sure to keep the story alive Anthony and you know I'll keep good of the baseball. Thanks so much!