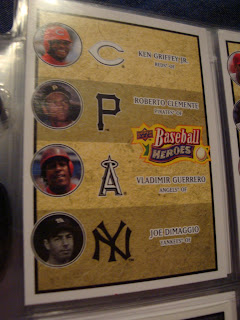 Ken Griffey Jr./Clemente/Guerrero/Dimaggio Quad Heroes,
Reds/Pirates/Angels, Yanks
Boy, this is a heck of a card! All 4 should be Hall of Famers (pretty sure about Vlad), and it is actually good collation, along with good pictures. The only thing about the triples and quads is that the pictures are so small, but maybe a horizontal person in every corner sort of thing would be good. I shouldn't complain though, this card is awesome! 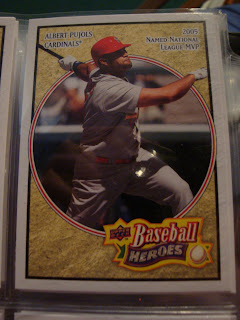 Albert Pujols, Cardinals
You can't forget Fat Albert in this thing. He is by far the BEST player in the bigs and will go down as one of the best hitters ever to play the game, and will be compared with Ruth, Aaron, Mays, Griffey, Frank Robinson, and Mickey Mantle. An awesome player and card, of a player who has the chance to win triple crown this year, leading the bigs in home runs and RBI, and with a .330 batting average. 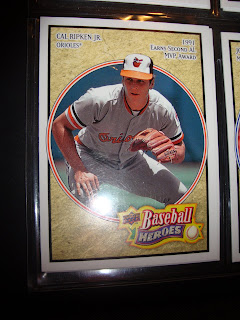 Cal Ripken Jr., Orioles
How can you not include one of the "Iron Men". Ripken is truly a baseball hero, and a perfect role model. An obvious hall of fame choice, Ripken is one of my all time favorite non Yankee players. 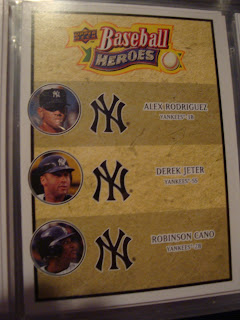 Alex Rodriguez/Derek Jeter/Robinson Cano Triple, Yankees
How could I not put this on the list. I collect all 3 of them, and they all are great players. Derek is my role model athlete, and I am a big fan of Robinson and A-Rod, although he used roids. 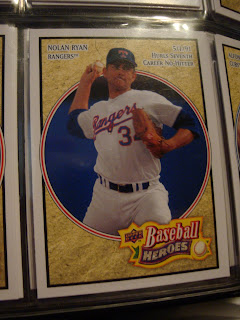 Nolan Ryan, Rangers
Here you go Rangers, Astros, Mets, Angels, yadda yadda teams, the best pitcher from the last 30 years! Over 5,00 strikeouts and 7 no-hitters, no duh he would be up this high! 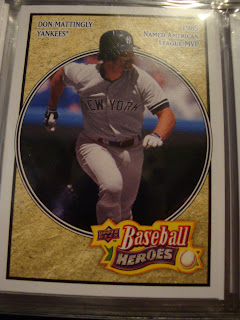 Don Mattingly, Yankees
This is what I'm talking about. This card is awesome. The photo is great and really works on this card, and is definitely of the one of the more popluar players in baseball history. Too bad he didn't play long enough to have a chance in the Hall. I'd like to see him in the hall of legends. 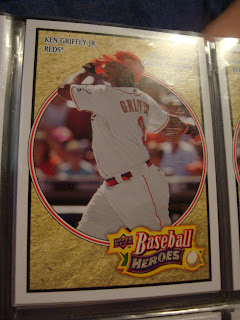 Ken Griffey Jr., Reds
Hall of Fame, get ready. You should start your Griffey exhibit now, you know its coming. Over 620 home runs and suposedly no roids involved. Definitely one of my top 3 favorite non-Yankees. 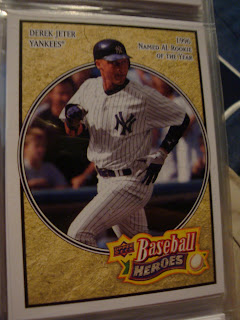 Derek Jeter, Yankees
The Yankees should be very happy to have a guy like this on their team. I think he is one of the greatest hitters in baseball when it is all said and done. He also is a true team leader and obviously was a perfect choice for team captain. He is a great guy off the field, spending time on Upper Deck U with kids and answering questions, and spending time with the Yankee Stadium Legacy collectors. No matter what you can say Boston fans, admit he is one of the greatest men in baseball, no matter what. Never in trouble, always helping his team win. Let's get him a full hand of rings, with a wedding ring on the other one, come on Mariah, get away from Nick Cannon! 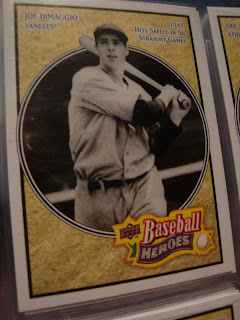 Joe Dimaggio, Yankees
Derek should talk to this guy about women, I mean, he married Marilyn Monroe! One of the greatest players in baseball history, and it's nice that Upper Deck recognized the player and put him in the set. Joltin Joe needs a spot! 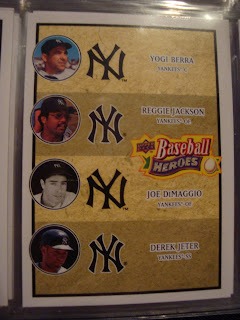 Berra/Jackson/Dimaggio/Jeter Quad Heroes
I know, I know, a ton of Yankees in this top 20, but this one is definitely my favorite! It also was the last card I needed in the set, and I love this card! 4 hall of famers, 4 of my favorite all time players, 4 players to wear the pinstripes, the right ones, a great card!

So, that is my top 20. If you didn't read cards 20-11, check out this link to do so. I'm leaving on vacation to New Hampshire tomorrow for the week, so I'll miss you guys for that time. Please subscribe if you haven't already, and comment on some posts. If you want to offer me a trade, check out my photobucket under the card websites section on the sidebar, and e-mail me at dmihans@optonline.net. Thanks a lot, and See Ya for the week!
Posted by Drew at 8:25 PM