Hey guys, Drew back here, as you may have noticed, I haven't posted an overload of stuff lately. Last month I posted 66 times, and this month I have 50 posts, with 3 days left. I've definitely been around, especially working out trades and e-mailing some bloggers. But I have still been busy. Here is whats going on lately:

Well to start last week and this week I have been going to "Al Hammell Baseball Camp" as a C.I.T. This week the camp is at Dutchess Stadium, where the Hudson Valley Renegades play. It has been a lot of work, especially because each week had 1 C.I.T. that did no work at all. Well, included in the price we pay to be slaves for him, are tickets to last nights game against the Staten Island Yankees. There was some bad weather, so we only stayed a couple innings. After e-mailing Ross from Sport Card Info., I found out that there were no big name players on either team. C'mon, I'm not missing out on another Longoria or Josh Hamilton! In the pregame though, we got to go on the field for a little ceremony thing, and a couple pitchers (relief I assume) were standing there, and I had a fat Sharpie in my pocket and a useless camp hat, so this is what I did: 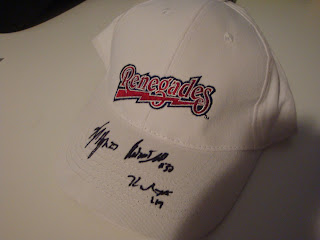 If you have a problem with counting, you may not know that there are 3 autographs on that hat. One is Glenn Gibson, one is Aaron Dott, and one is Kyle Ayers. All 3 are pitchers, and you can see more about them on the links. Glenn Gibson is the son of former Yankee pitcher Paul Gibson, and apparantly Dott pitched a no-hitter against the Green Bay Bullfrogs on June 17th, 2008. Huh, interesting stuff there, although they probably all won't make it anywhere.

So, before I say bye bye for now, I want to promote the future 2009 Album of the Year:

Daughtry: "Leave This Town" CD
This album is great, almost every song is hard rock upbeat, please check this out if you are interested in this type of music, it's just plain awesome.

Also, I started working on the Top 50 Greatest Artist list, and that should start sometime next week on my other blog. See Ya!
Posted by Drew at 7:01 PM