It was an incredible way to start it off. I walked into Yankee Stadium, and was lost in the pride of the Yankees. I turn and look and see the Yankee photos posted up on the walls, of all of the legends. My dad & I had to look around. We really wanted to see Monument Park or the Museum, but it was too late, the lines were already filled. "We'll go another time," I said, after we left the museum line. But then, along the way to our seats was Monument Park waiting for us. So we got in line, and about 5 minutes in at 11:45, the ceremony for Old Timer's Day began, with John Sterling and Michael Kay announcing the Old Timer's one by one. We took a long rush to our seats, finally there... 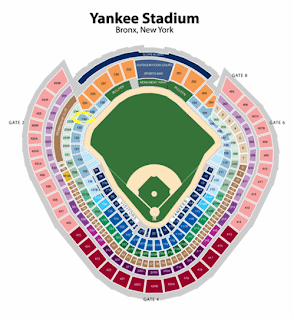 We met the father/son combo sitting next to us, and enjoyed watching legends like Whitey Ford, Don Larsen, Reggie Jackson, Graig Nettles, Goose Gossage, Mike Mussina, & Yogi Berra step out of the dugout. After the nice ceremony, the announcers had Thurman Munson's wife and Bobby Murcer's wife come out and throw the 1st pitch. Next, the old timers played the game, the Clippers vs. the Bombers. Mike Mussina started the game giving up 4 straight hits, and in an interview with Kimberly Jones (YES), he said by seeing that that he can't pitch anymore and is happy retired. I watched Goose & Coney pitch a little, then Doc Gooden on the other team. Doc really seemed to put on some weight recently. Ron Guidry also pitched in the game, and hit, and played left field. Gene Michael hit the ball once and started running, and immediately after he started, his shoe flew off his foot. Mickey Rivers hit one in the gap at one point, and after reaching 1st already, as the ball is being thrown in, he picked up speed and hustled (fast for an old fast guy) to 2nd for a double. The game would eventually end in a Clippers win (who cares???). Some things I noticed about this event was:

- There were not nearly as many legends as usual.
- Reggie Jackson for some reason didn't play in the game while Mickey Rivers, Bucky Dent, and others from his time played.
- Some Yankee employees missing: Paul O'Neeil and Tino Martinez
- Darryl Strawberry didn't show up along with Dave Winfield.

Anyway, Dad and I got our food in between the ceremony and game time. I got the chicken fingers with some cheesy fries on the side and a Pepsi. The food was really good, some of the best chicken fingers I've ever had. But it was expensive, that's for sure, but we need to overpay A-Rod, Jeter, Sabathia, and others. So we waited for the game, and eventually, it began.

The pitching matchup that day happened to be Joba Chamberlain vs. Edwin Jackson. Jackson so far this year is 7-5 with a 2.52 ERA and around 100 strikeouts. He made his 1st career all star team, the year after he was dealt to the Tigers in exchange for Matt Joyce, a promising young outfielder. The Rays could use Jackson right now. As for Joba, he has been struggling big time this year, but said he looks at the season as 2 seasons and hopes to regain his edge. I thought it would be a great pitching matchup and it looked to be a good game. Both teams have been successful this year, and the Yankees were looking to sweep the Tigers.

*That wasn't my picture*

So Joba started off well, but walks really killed him. He only gave up 2 hits into the 4th inning but it seemed like more with the consistent 1 walk per inning deal. Joba did give up a shot though in the top of the 4th, serving up a homer to right fielder Clete Thomas, his 6th of the year. In the bottom of the inning though the Yanks fired back, with an A-Rod solo HR bringing them back into the game. Some great pitching went on, but in the bottom of the 6th, Mark Teixeira hit his 23rd home run of the year, and the score was 2-1 Yanks. When Joba left the game in the middle of the 7th inning due to a high pitch count, he only gave up 3 hits, gave up 1 run, and struck out 8. Truly one of his best performances of the year. Phil Coke came in relief for the end of that inning, and Phil Hughes pitched the 8th. Rivera came in for the 9th, and remarkably, this was the 1st time I've ever seen him pitch live. His entrance was awesome, and the fans went crazy. He picked up the 1st two outs, and then walked a batter. He got Gerald Laird to ground out to end the game, and the Yankees won by a score of 2-1.

Overall, it was a really exciting game, and I had a blast. I got a plaque with a 2009 Topps card of Joba to add in my room, along with a 2009 Old Timers Day shirt and the 2009 Yankees Yearbook. The new stadium is really nice, and it shows the pride of the pinstripes really well.

Let me know if you want any of the pictures in the slideshow. Make sure you check out the slideshow if you didn't already, it shows all the pictures I took. I took some more videos but they take forever to load so I just posted these two. I hope you enjoyed this stuff, please let me know if you want me to change things around for next time, by comment or e-mail (yanks1996wsc@gmail.com). Please subscribe to the blog if you haven't already, and see ya later!