Hey guys, Drew back here. On a sad day in baseball, I got a nice TTM back. That side day is because big name prospect Stephen Strasburg will undergo Tommy John surgery, and will be out for at least 12 months, which means no pitching next year most likely. Many pitchers have had the surgery before, and there is an 85% recovery rate. 10 2010 All Stars have had the surgery before, and many other pitchers have came out better than ever. Maybe this guy will too: 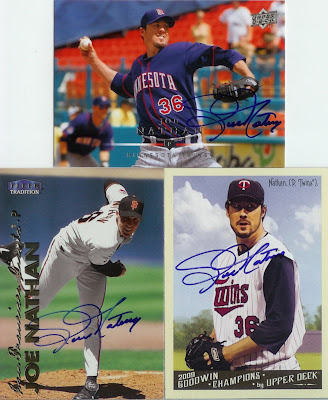 I've had a knack of sending cards to players at the worst times. I sent to Pat Neshek to the Twins, but he was actually hurt rehabbing in the minors at the time, and I didn't get back for a long while. I just recently sent to Jeremy Hellickson to the Rays, and he got sent down immediately after, but will be back up soon. Now there's Joe Nathan, who I sent to just before he underwent Tommy John surgery. Way to go Drew! I'm pretty sure it was sent late last season but it could've been spring training, I don't remember offhand, but let's just say it took a while. I was worried I may never see my cards again, but I did thankfully, returning today after months of waiting.

Mr. Nathan kindly signed 3 cards for me, including his Fleer Tradition RC with the Giants, a 2009 Goodwin Champions, and a 2008 Upper Deck. His signature is just as nice as before, and I'm really happy he could return to me! Thanks Joe and good luck next year!

Have you guys ever had almost tragic mistakes in the TTM business? Don't be scared, I don't bite, and leave some stories in the comments! See Ya!
Posted by Drew at 12:45 PM