Hey guys, Drew back here with some more of the day that was August 22nd, 2010, one of my favorite days of this year! We ate lunch and then all jumped around different lines to meet different players, so let's see the results!

12:15 PM
After lunch, Mike and I immediately jumped into the Roy White line. White was the free guest of the day, and Mike found a ticket for him on the ground, so we had 5 tickets between the 2 of us. I had 3, he had 2. Grandpa Roy sat down for a while, talking to some people, and dad, well, you'll see in a seperate post what he was doing! As Mike and I moved forward to meet White, a table facing us was along the way. I jumped out of line and checked it out. They had a lot of Mets and autograph guests stuff, lots of Ralph Kiner. I asked the seller about one of the Kiners and he slowly took out some book and told me to read him the number on the back of the card. Eventually he found it and said "$12.00". I asked about one more, and then after deciding no for that one, I asked if we could do $10 for the first one. He slowly took out his book and eventually gave the card for $10. I almost got kicked out of line because of that guy. But, I didn't and I got a nice card too. 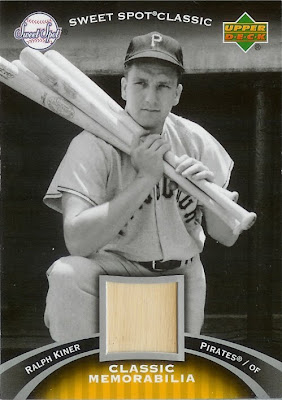 From 2007 Sweet Spot Classic, a bat card of Ralph Kiner. I have a bunch of these as you may know, and I can't stop loving the set! Before I forget, just before we got in the Roy White line, I picked this up for I think $5. The guy had a ton of these types of cards, and I love me some wool. 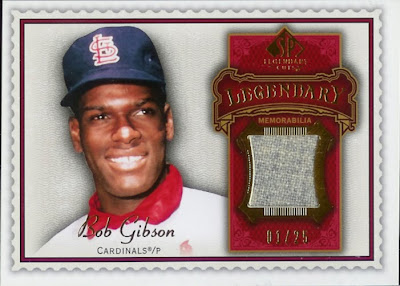 From 2009 SP Legendary Cuts, a Bob Gibson wool jersey numbered 1/25. And no, just because it has a one in the serial number does not qualify it as a 1/1. Anyway, cool little card for a nice price.

So, now we're getting close to Mr. White, our supplies out, ready to go. I made Mike a custom Roy White card to get signed, and I made one for me too. My dad also bought me his rookie card earlier, so I wanted to get that signed. I had 3 cards for me, but when we went up to the guy next to White collecting tickets he told me only 2, because you're really only supposed to do 1 for the free guest. Well, I got the better 2 signed, and they turned out great. I'm not showing the other one yet, I'll reveal that in a bit. 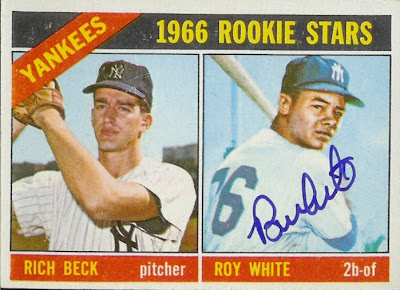 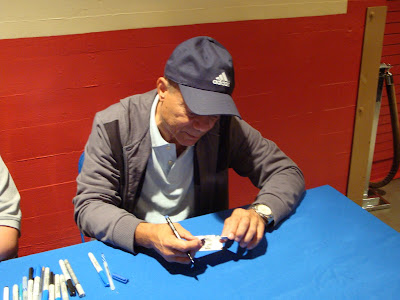 Mr. White was a very nice guy like he was when I first met him at a Holiday Inn Card Show a few years back. He looked at my customs and he said "Wow, never seen these before!" I told him that I made it for him to sign, and he thanked me and said "This is a cool looking picture, haven't seen it much, rare compared to the others I've seen. Except I look a little Chinese!" What a cool guy, I really like him and will probably get more of his cards. 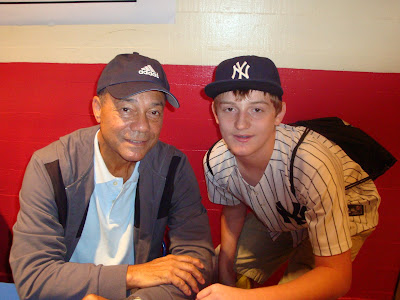 12:45 PM
Meeting Roy White was fun, and so we then moved on to Dr. K. We had to wait in the waiting room for our number group to be called, but again it was worth it. It didn't take as long for the line to move then, since he'd been signing for close to an hour at that point. Mike really looked forward to meeting Mr. Gooden, and I wanted to see him too, so we both got 8x10's and they came out sweet. I didn't talk much meeting him, he seemed quiet too, but I shook his hand and asked him how he was doing, and he said he was doing well. The one thing I'll remember about Dwight was shaking his hand felt like shaking Shaq's hand! It was huge! Next to him signing was the great Robin Yount, so it was really cool to see him up close too, he looked like a really cool guy too. After I got my autograph and got a picture signed, we got the pictures certified by JSA and headed out. 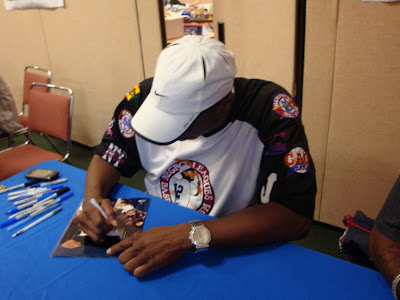 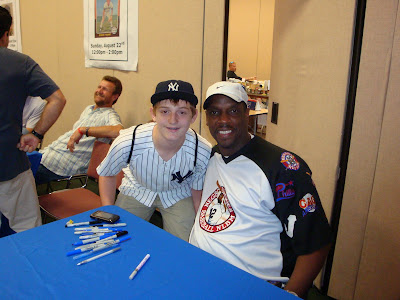 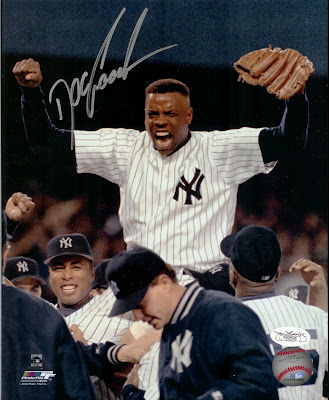 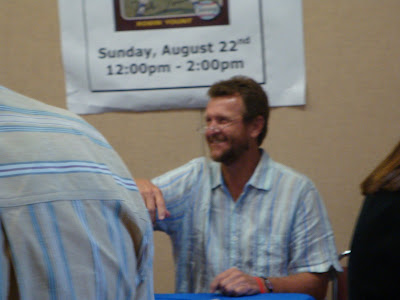 Robin Yount
1:15 PM
Mike and I came back to meet up with dad and Grandpa again after meeting Gooden, and we lost the second door prize, for an autographed 16x20 "The Catch" Willie Mays framed picture. We split up yet again so Mike and I could get in line for Mel Stottlemyre, and dad said he'd catch up with us as we get closer in line. Mike wouldn't have been in line if he didn't find another ticket, for Stottlemyre, on the floor! He always gets some kind of luck at these shows! It was a pretty long line, because it was a combined line for Sid Fernandez and Stottlemyre. Never mind, just Stottlemyre, and we knew this after a guy came down the isle yelling "El Sid El Sid, who's in line for El Sid, Sid Fernandez, anybody for El Sid?". Nobody came. And I mean nobody. I betcha at least 1/4 of the younger people there had no clue who Sid Fernandez was. 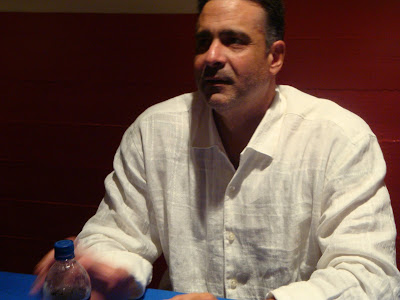 I called dad as we got close and we rushed over to meet Mel with Mike and I. He made it just in time for the meeting! Mike went first and got his 8x10 photo signed, and then I went. I said hello to Mr. Stottlemyre, and I told him I made the card for him, and he replied "Very nice, thank god for computers!" in a joking voice. He was a nice guy, and he got us a nice picture with him. A cool way to end our meetings with players! 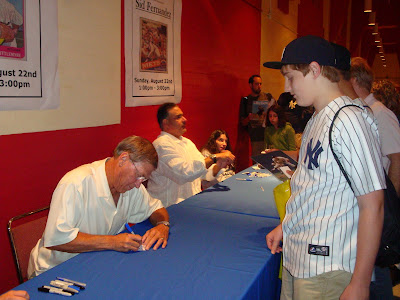 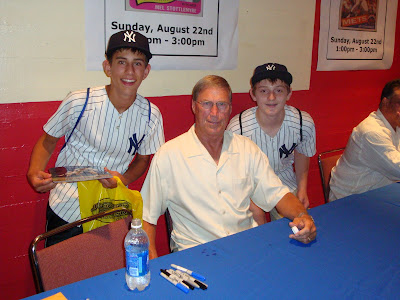 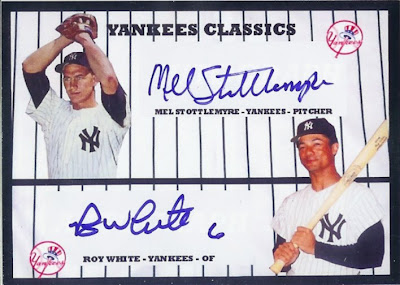 This was my mini project success, and it sure looks great! Got both White and Stottlemyre to not only sign but to make it fit nicely!

Looks like we have one more part to come! More shopping! See Ya!
Posted by Drew at 10:41 PM