Mail from the past Week

Hey guys, Drew back here. I got a lot of trades done recently, and 1 eBay pickup (another after today). So, I don't have much time, so I'll get this in now. First package is from Timmy of Tim's Baseball Cards. I hadn't traded with him before, and he straight up made me an offer, and I accepted. 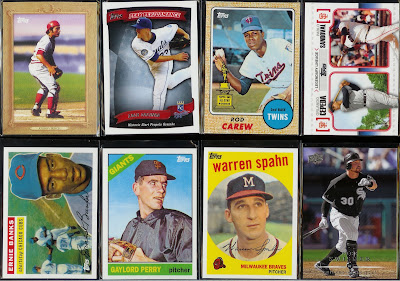 A bunch of 1950's and 60's cards! Not. Hahaha, some Cards Your Mom Threw Out and other inserts I needed for my sets! Also, he threw in a Swisher which was cool! Thanks Timmy! 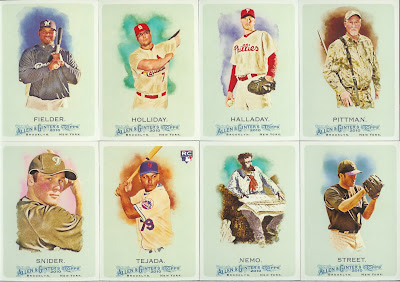 Next is a deal with John L, who I've made one trade with before. He and I trade well together, until I noticed I traded some cards he wanted. Fortunately, I'm trying to get some cards for him, bought him one at the show, and I'm getting 1 more sometime soon. But this is his end of the deal. First are 20 2010 Allen & Ginter cards, and now I just need one more trade's worth plus 1 more card and the base set is done! 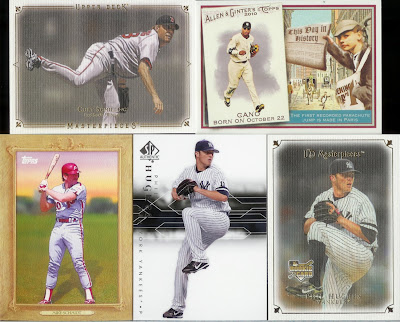 Next, a bunch of random stuff, a Masterpieces card needed (Schilling), a Cano, 2 Hughes', and a Schmidt Turkey Red for the set. Sweet! 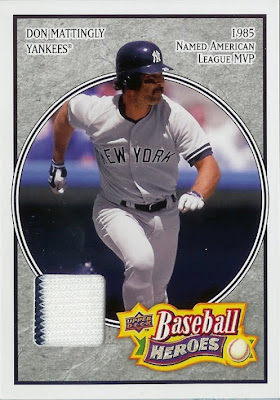 The 1st of 2 hits, is this Don Mattingly jersey. I've built up a sweet mini Mattingly collection, now 7 relic cards, and this is a nice one too. It's from a set I like, 2008 UD Baseball Heroes, and it's got a pinstripe, which is also sweet. I think it's the retail jersey, which is the only jersey parallel from the set not numbered, the charcoal version. It's a really nice card and a nice addition to the Don Mattingly collection! 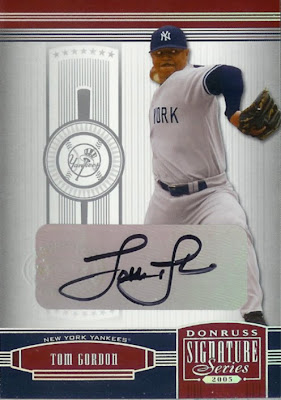 The last card from John is this Tom "Flash" Gordon auto. He said he had one, and I figured it'd be a unique pickup, never see much stuff of him. He had a nice career and pitched for the Yankees a few years so I wanted to add his auto to the PC. He's got a nice looking auto too. 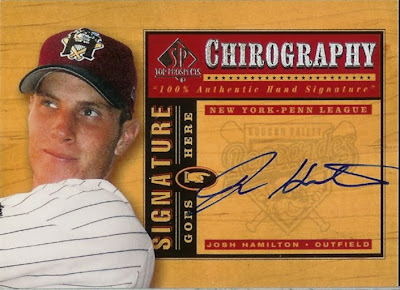 And this is my eBay pickup. Can't say this was cheap, but it's of a possible 2010 MVP, and a former Renegade, IN A RENEGADES UNIFORM!!!! I needed this card as soon as I saw it! Josh Hamilton has evolved into one of my favorite non-Yankees, and a great player as well. I really like his story, of how he changed as a person, finished drugging, and became a star. Wow. All I can say was I'll always remember the night in Yankee Stadium when he slugged 28 Home Runs in one round. What a show.

Anyway, so instead of buying a Tribute auto of him (which I would've done had I not seen this card), I got one that means much more to me. As most of you know, I am a C.I.T. at a camp on the actual Renegades field, so I really appreciate the former and current Rays that came through the team. I used to go to the stadium all the time as a kid, great memories, and the weird thing is, although I have no proof, I may have seen some of these guys play for this single A team. Being on the field, and playing 3rd in an actual scrimmage game at the stadium makes me almost call this one of my homes, and I just love being there. Well, long story short, I like Josh Hamilton, and this is never going anywhere. Amen.