Hey guys, Drew back here! This past week has been quite the disaster in terms of schoolwork; having to do quite a bit to finish up my college level courses. However, I found a little time today to get a quick post up about a card I picked up a week or so ago. I got this one for about $10, which in my opinion was quite the steal! 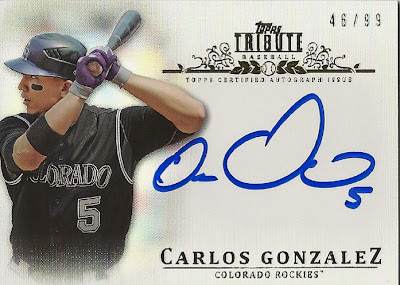 Out of the relatively new 2013 Topps Tribute set, here's a beautiful on card autograph of Car-Go, Carlos Gonzalez! I've been following Gonzalez's career ever since he first left his mark on my fantasy team a few seasons ago, and I've been a big fan since! Whether he benefits from Coors Field or not, he can easily call himself one of the only 5 tool players in the game today! He's off to a great start in 2013, batting .303 with 13 home runs and 33 RBI, and his 9 steals put him on pace to possibly be a 30/30 player! His autographs were always fairly expensive, but he had been in a few recent products, thus driving down his price a little bit.

What do you guys think of Car-Go? Is he a product of his environment, or would he play well anywhere?

Hey guys, Drew back here! As many of you may have seen, Yogi Berra celebrated his 88th birthday this past week. The Hall of Fame catcher hasn't been doing very well from what I've been hearing, but I guess that's expected of most 88 year olds you come across. At the last card show I went to, many people were telling me that he's now done with signing autographs in person, and that the only way you can get your item signed is if Steiner comes up clutch for you. Basically, I probably won't ever get to put him on my Mantle photo, which really is unfortunate. However, at that show, since I didn't buy a whole lot else, Dad & I went in on one new piece for my collection. Observe: 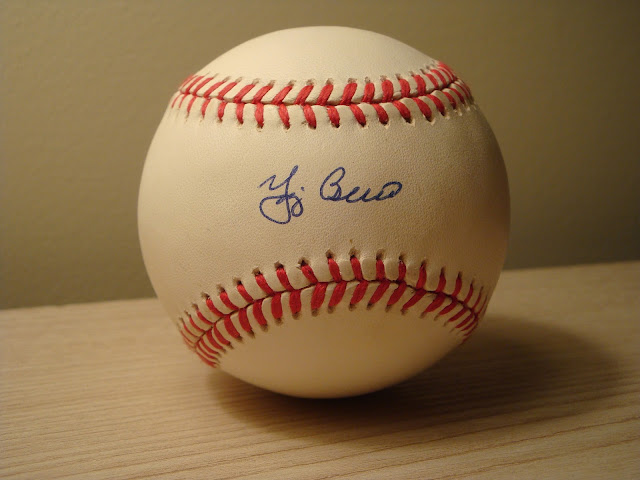 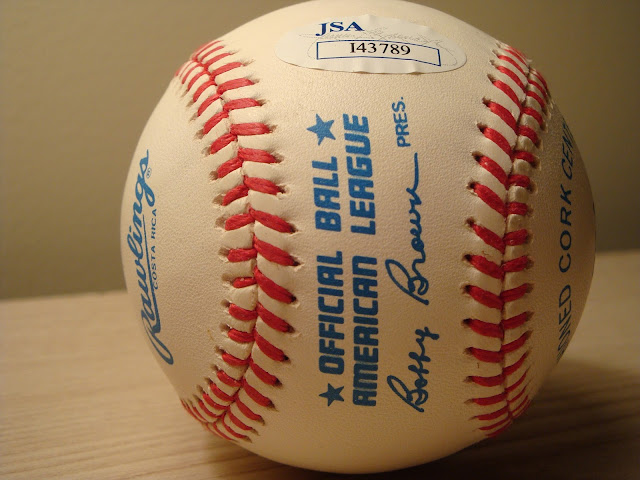 Indeed, I've now added Yogi Berra to my signed baseball collection! I've been wanting a Yogi ball for a while now, so this was a really big addition personally. We got it from a dealer who we've seen at every show since we started going but never really bought from, but the experience sure seemed like we've already had a history! The guy was cool enough to knock $10 off the ball, and since it wasn't authenticated by any 3rd party company, he went and got the ball authenticated by JSA free of charge! Most of his items were already authenticated and a bunch of his other customers said all of his stuff was legit, and I knew a Yogi Berra auto when I saw one. But because he went so out of his way for us, it won't be the last time we buy from him! 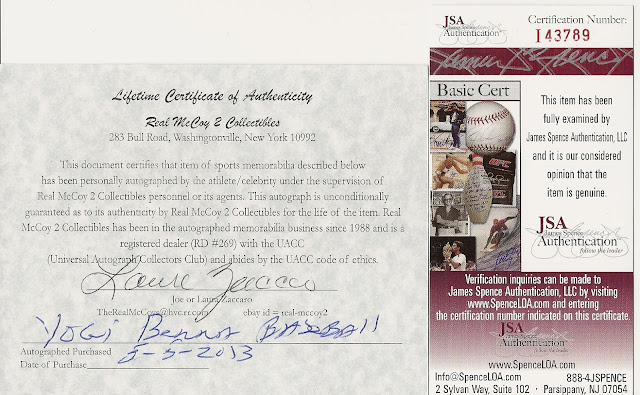 I'm so glad I took advantage of this opportunity, and I'm thrilled to add #8 to my ball collection! Happy belated birthday Yogi, and god bless! 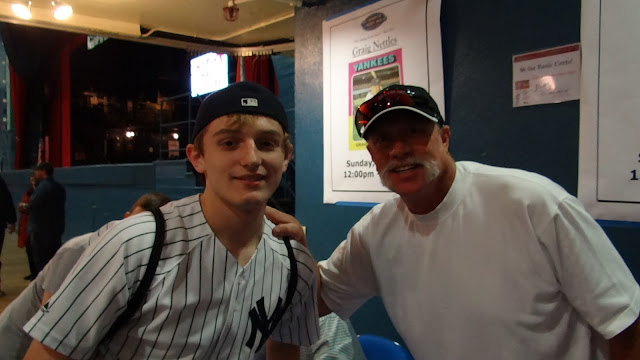 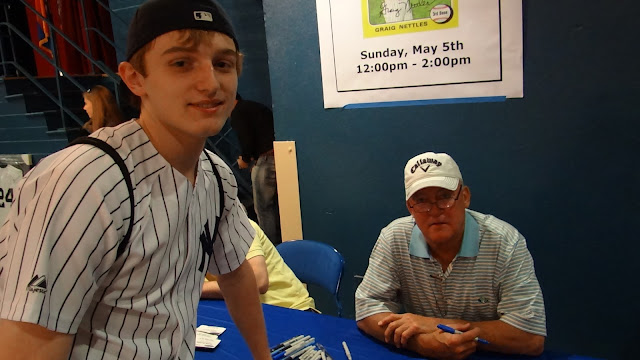 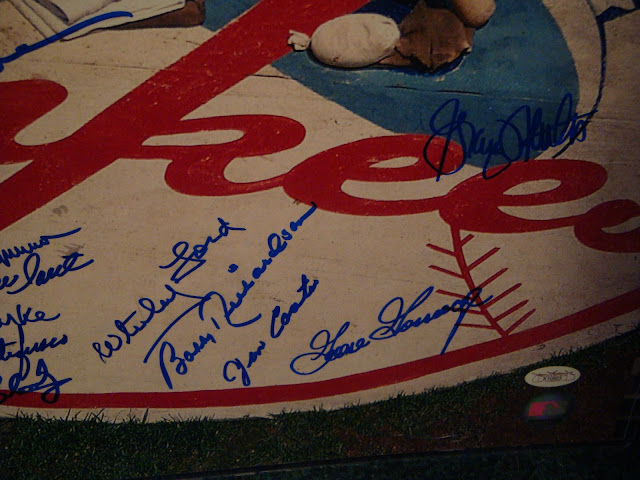 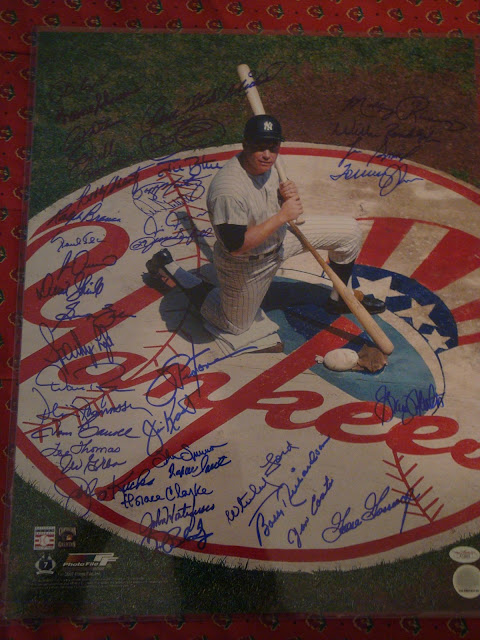 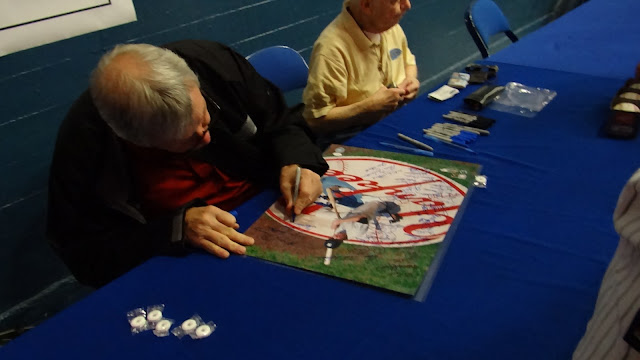 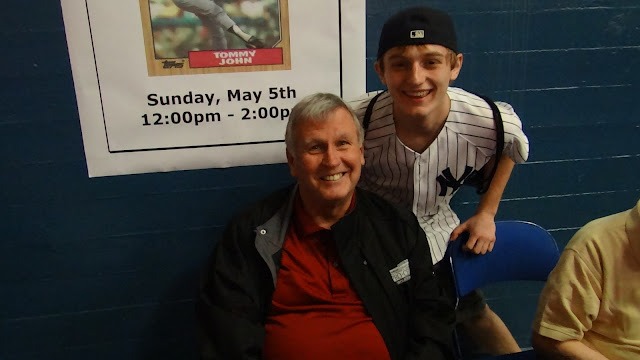 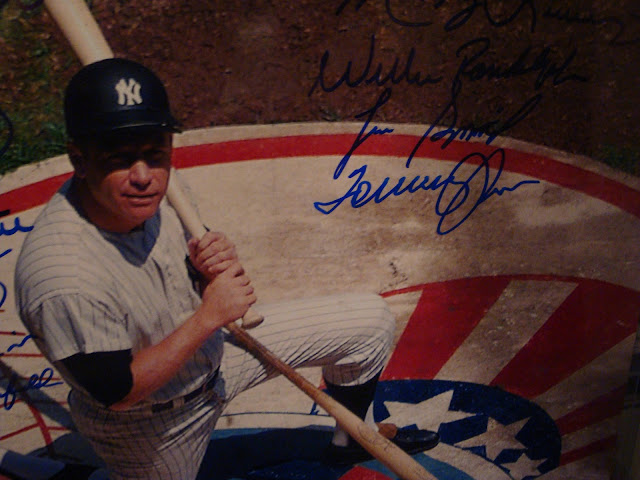 Be sure to be on the lookout for the next few players I got the chance to meet! Have a good one guys, and See Ya!
Posted by Drew at 9:41 PM 2 comments:

Hey guys, Drew back here! Boy has it been a while since my last post. I've been very busy lately, studying for my AP US History exam and various other things. However, I've got a lot to show you guys, including some card show stuff I'll hopefully get to in the near future. But before I get too behind, since I've been sending out TTM's frequently of late, take a look at who I've gotten in the past few weeks!

Jordan Zimmermann: c/o Washington Nationals, 1/1 in 17 Days
Jordan has been one of my favorite pitchers in baseball throughout the past few years, especially after his monster season for my fantasy team in 2012! He signed a 2011 Gypsy Queen for me in a thin blue sharpie, and it came out pretty nice! 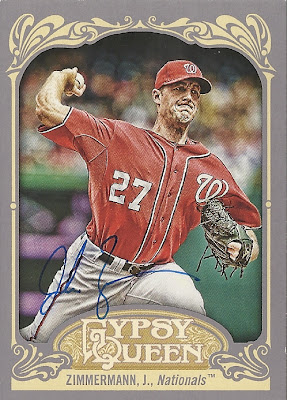 Kent Tekulve: c/o Pittsburgh Pirates, 1/1
I lost track on how long this one was in the mail, but it couldn't have been much longer than a month TAT. Tekulve was known for his lanky frame and funky style as closer of the Pirates "family" team that won the World Series in 1979. He now serves as the Pirates broadcaster, and he signed my 1979 Topps card nicely in black sharpie! 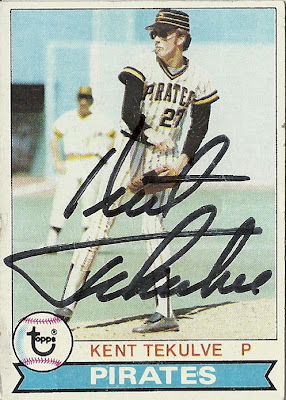 Will Clark: c/o San Francisco Giants, 1/1
Clark was also in the Tekulve bunch, so I'm going to assume this one came back in a little over a month! When I came across this Score "Dream Team" insert of his in my basement, I knew it was just waiting to be signed! "The Thrill" came through clutch, and the autograph honestly exceeded my expectations. Great piece from a great player! 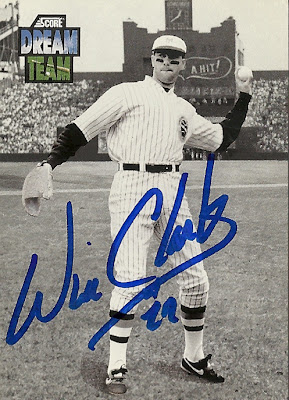 Chase Headley: c/o San Diego Padres, 2/2 in 23 Days
Chase Headley easily had the most underrated season in baseball last year; batting .286 with 31 HR and 115 RBI (most in the National League)! He is a great TTM signer, so I figured spending under a dollar on postage for him would be easily worth it. He signed a 2010 Upper Deck and a 2012 Topps card for my collection! 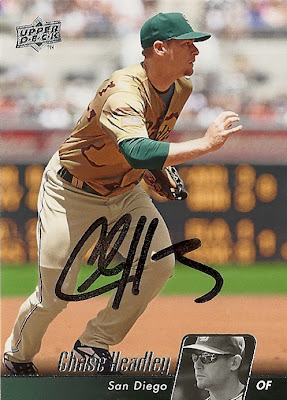 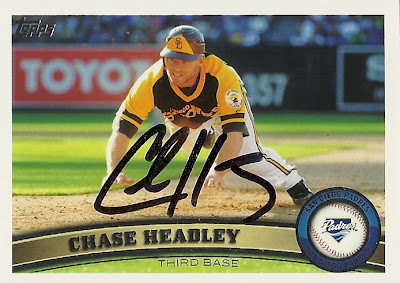 Al Toon: c/o Home Address, 2/2 in 24 Days
My dad always tells me about how much he enjoyed watching the Jets' receiving tandem of Al Toon and Wesley Walker back in his day. I saw that Mr. Toon has been signing through the mail lately, so I took my dad's word for his stardom and sent him two cards. He signed both inscribed out to my name, and inscribed something I haven't been able to make out. It looks like something "2011", but I don't know what that would even mean. If any of you have a clue, I would love to know! Thanks! 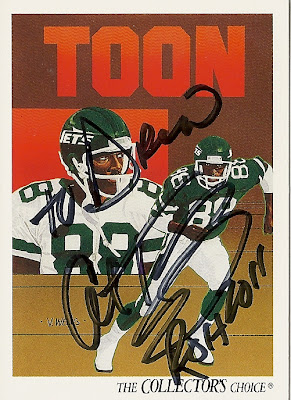 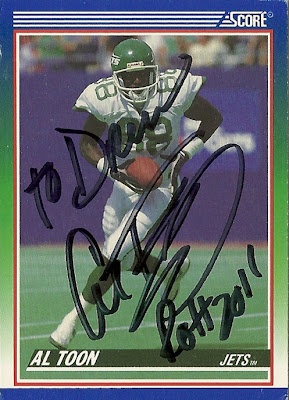 Ben Zobrist: c/o Tampa Bay Rays, 3/2 in 32 Days
I've been a Ben Zobrist fan ever since a Yankees game I went to against Tampa Bay in 2010. We were sitting in one of the first rows in right field and he was in right that game. All I remember was a crazy fan hollering at him the entire game, and it never seemed to phase him. Okay, maybe that isn't really a reason to like a guy, but every time I think of him I think of that day. He's a great all around player, and could possibly win a gold glove at several different positions, making him one of the most versatile guys in the game today. Zobrist signed the two cards I sent him and included his "Identity in Christ" card which he inscribed out to me! 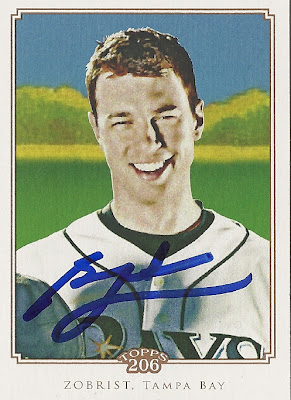 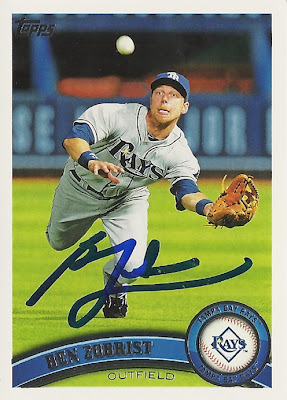 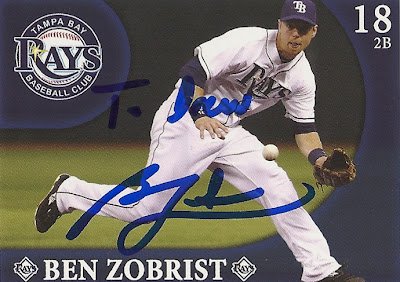 I hope you all enjoyed the successes! I might start doing TTM posts on a weekly basis, unless I get a huge one back that deserves its own respective post. Have a great weekend everyone! See Ya!
Posted by Drew at 4:36 PM 2 comments: