Hey guys, Drew back here! It has officially become the busiest time of the year for me; baseball season. Our school Varsity team is 2-0 to open the season and I'm making really solid contact with the ball as of now! The season is nowhere near as long as the MLB season but it sure can be a grind, especially when we have 3-4 games a week. Luckily for me, my senior year is all but wrapped up academically, as I only wait for my AP Calculus, Literature, and Government tests! Following that, my final quarter grade will be based on an internship project I'm going to be doing with the Hudson Valley Renegades! I'm really looking forward to working with them and it'll be a great way to transition my high school career into a college education and hopefully a great career in the Sports Management business.

So, now that you're all caught up with what's going on in my life, how about I show off the newest signed ball in my collection? Check it out: 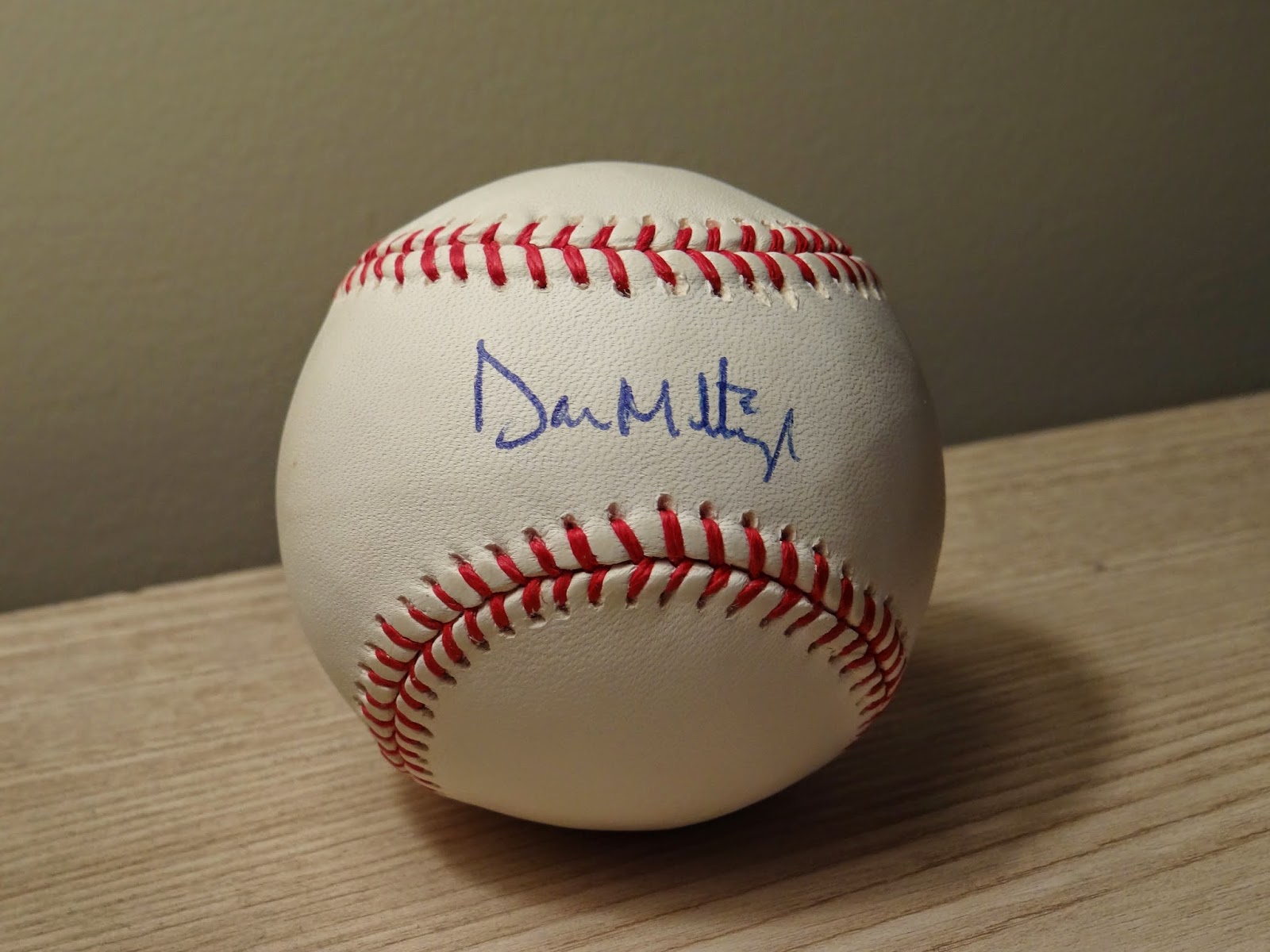 Former Yankee captain and current Dodgers manager Don Mattingly is the most recent addition to my signed baseball collection! My dad bought this beauty for me at the last card show we were at, and it certainly makes for a great addition! Mattingly is one of my favorite Yankees of all time even though I was too young to see him play; he led the team the right way and was a respectable player throughout baseball. I don't know if he should be in the Hall of Fame or not, but with recent selections such as Roberto Alomar and Barry Larkin I don't see how he can't be. Maybe if he can lead the Dodgers to a few World Series championships he can go in later in his career similarly to Joe Torre, but regardless of whether or not he makes it, he will always be a fan favorite and Yankee legend. Having him in my signed baseball collection was a must, and I'm so glad I can now check him off the list!

Thanks so much Dad! As always, you didn't have to, but it will most definitely be hanging around in my collection for as long as I can foresee.

Tiny Progress with the Mantle Project!

Hey guys, Drew back here! Today I'm going to explain to you exactly how not to sign for fans (even if you are the free signer). At the White Plains card show my Dad & I recently met Mariano Rivera at, we also took the time to wait in line for Ruben Sierra, who as I mentioned before was the day's free signer. I wouldn't have had much interest in meeting Sierra had he not been eligible (under my standards) to sign my Mickey Mantle 16x20 photo. I figured he'd be one of those nice little names to balance out the big guns that already signed the picture, such as Berra, Jackson, and Henderson. Well, he signed it... but that was about it. 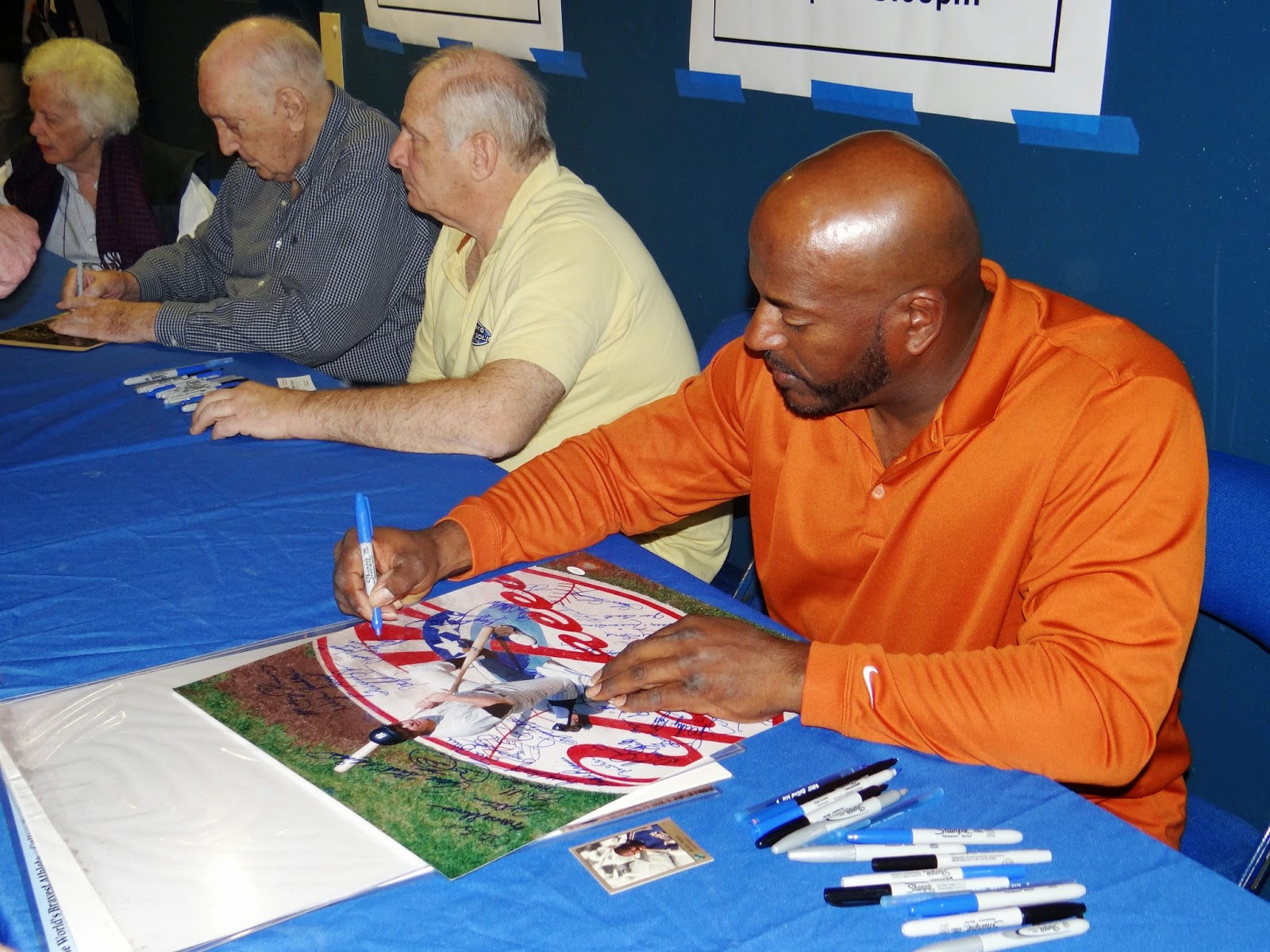 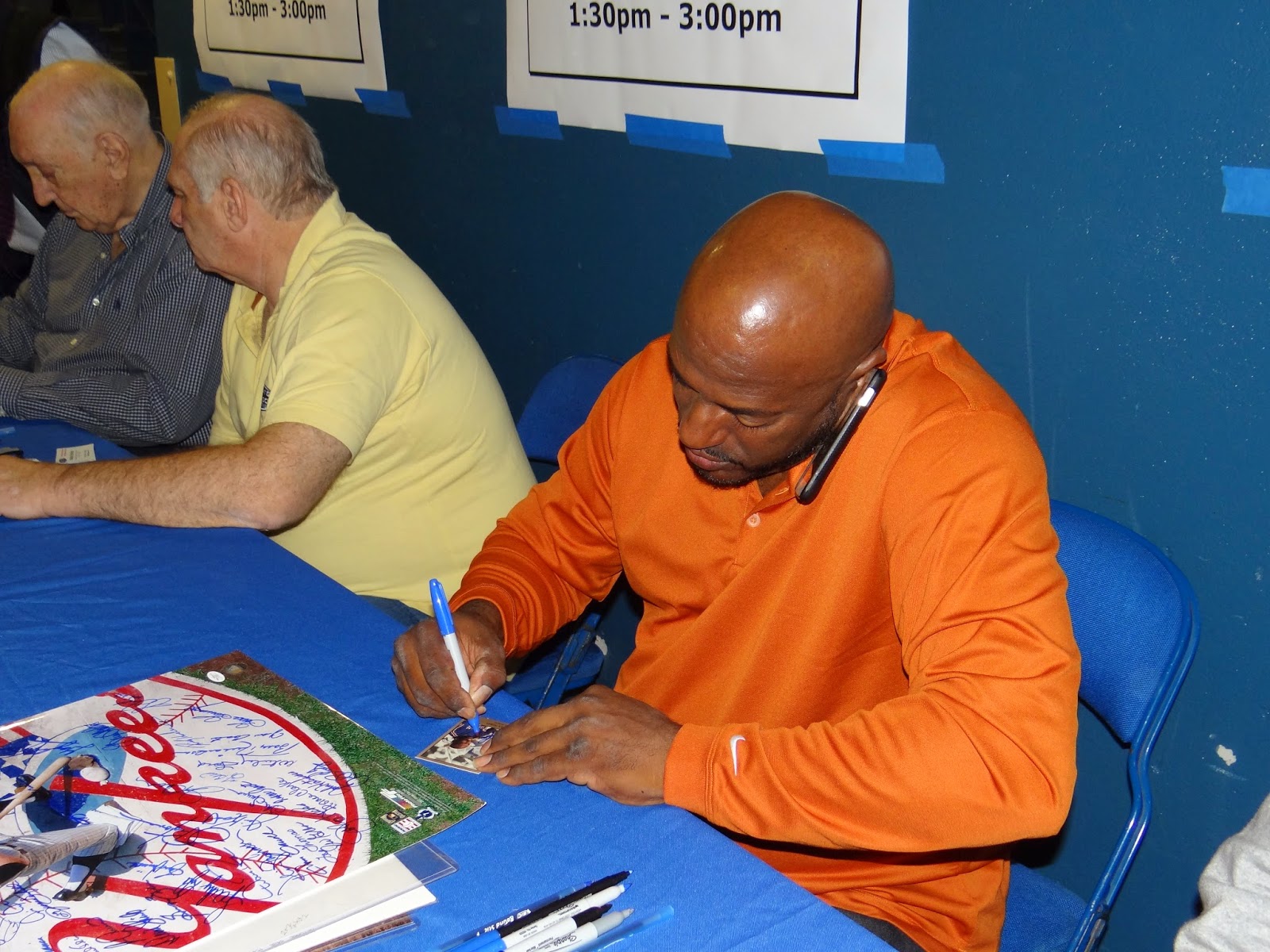 While signing my Mantle picture and a card I also brought along, Mr. Sierra was taking a phone call, and it wasn't one of those ordinary "Hold on I'm busy let me call you back" sort of calls. It was more of a "How are you? Oh yeah... I can talk" conversation, even though I believe he was speaking Spanish but it was hard to tell with the noise of the building. I don't know about you, but I feel like if you're doing a meet and greet, you should probably at least try to look like you care. I thought Sierra was beyond disrespectful and that little amount I may have ever liked him has basically gone away. I couldn't even get a picture with him because he didn't even look up at me. I tried leaning in for a photo and was ready to say to him "I hate being rude and interrupting your phone call and all but would you mind posing for a picture?" Whatever. 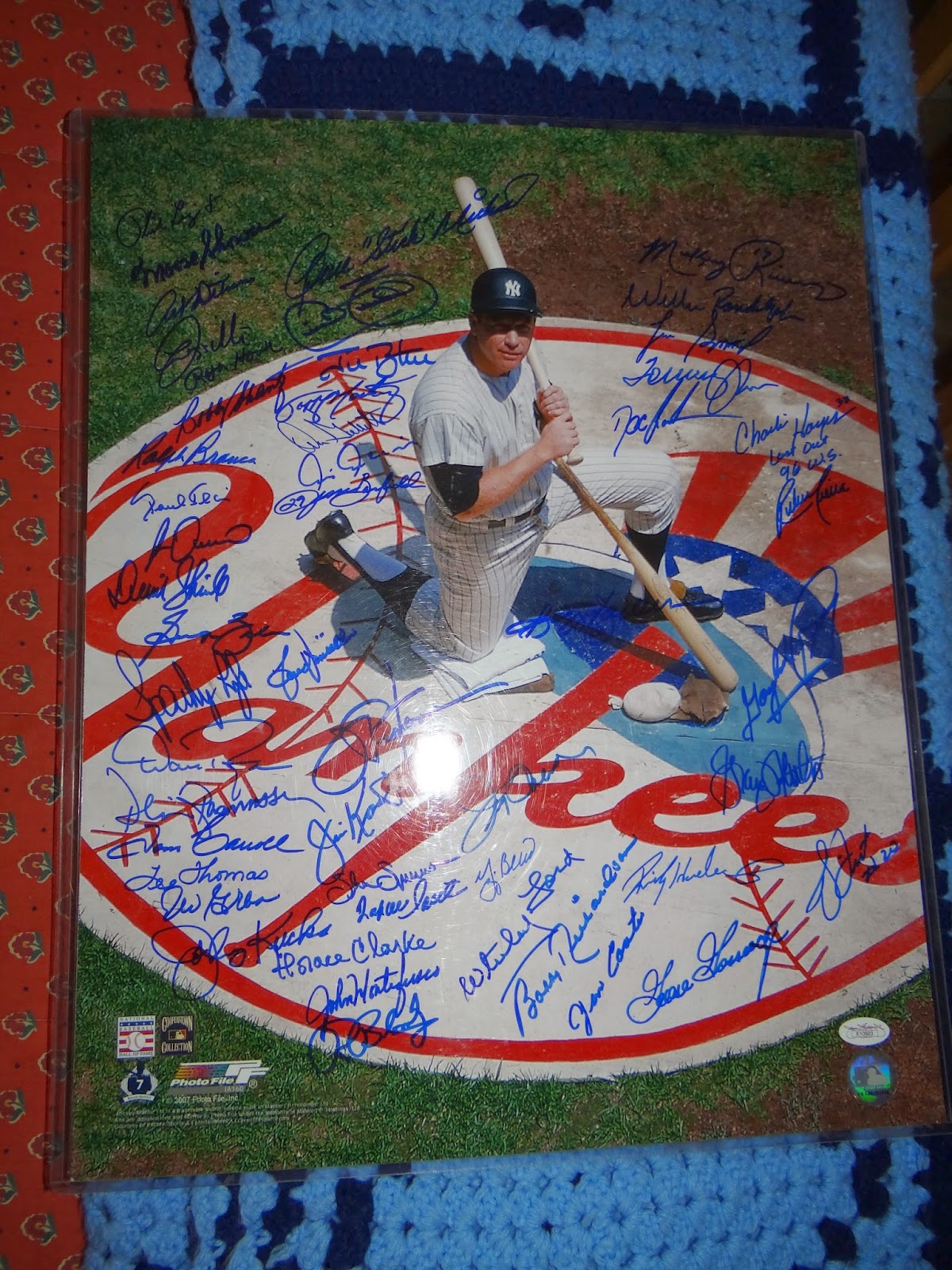 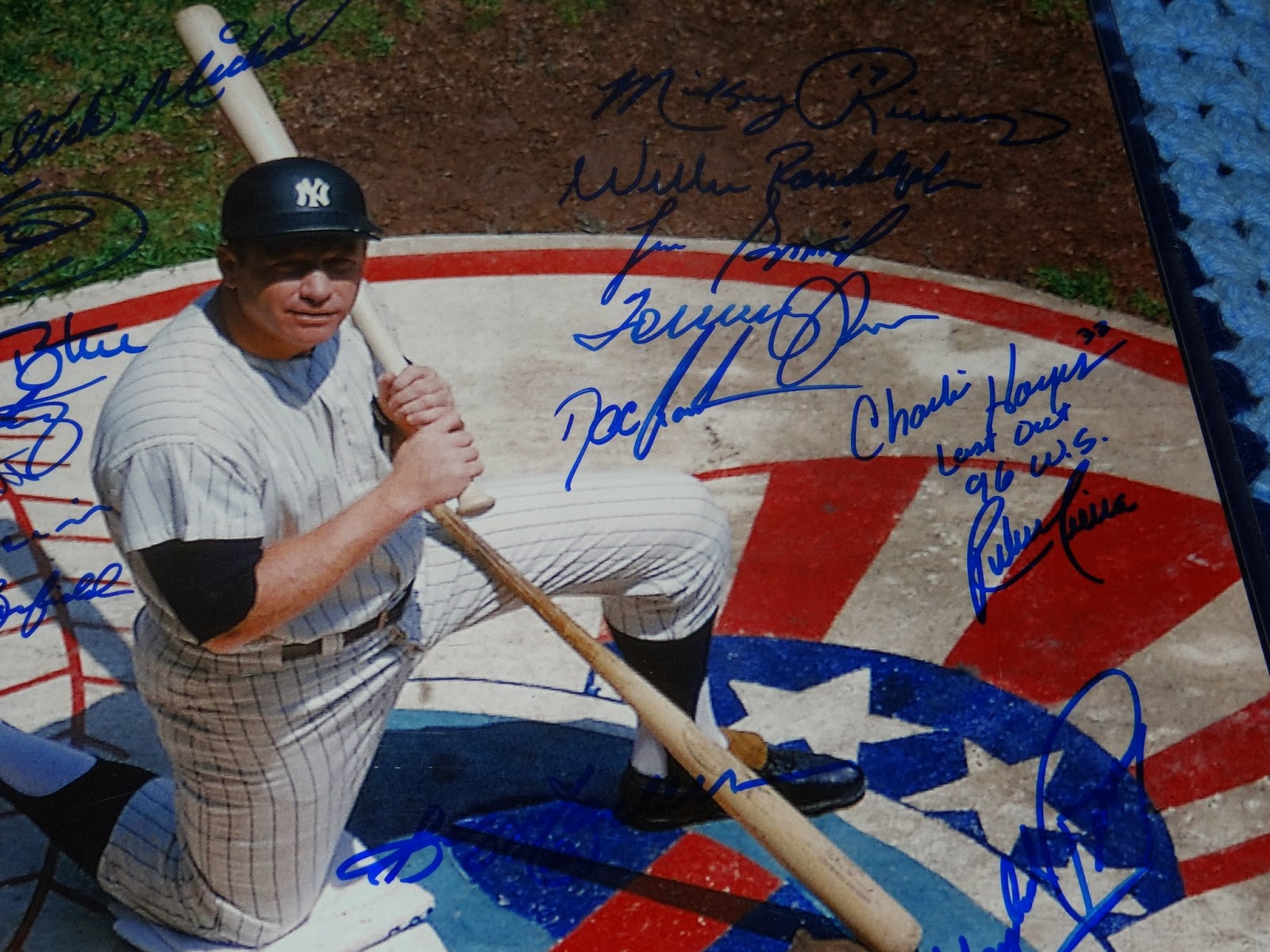 Sierra signed directly below Charlie Hayes, and about the only positive I can draw from the experience was that he has a nice signature. Otherwise, autograph #51 on the Mantle poster was as lackluster as it got. I know Sierra was a freebie, but so was Roy White and so was Ron Blomberg, two of the nicer guys I'd ever met. It's just another example of how most modern day players are nothing like Mariano Rivera. 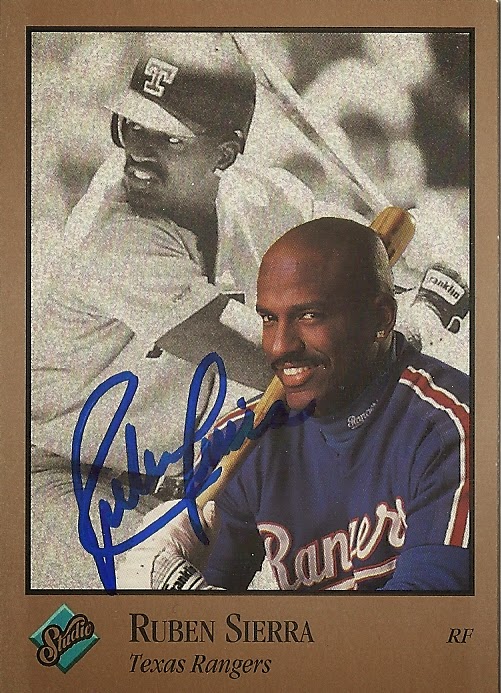 Here's my other "prize" from the Sierra encounter. A signed 1992 Studio card. Yippee!

I'm not disappointed, because I didn't expect much from him. Heck, I hardly even wanted to meet him in the first place. But this was pathetic.

Feel free to share your rude autograph seeking experiences in the comments below. And do you think having a phone conversation is crossing the line?