Trade with the Night Owl!

Hey guys, Drew back here, this time with a little (actually big) mailday courtesy of Night Owl Cards, the 2009 blog of the year! Greg sent me a great package full of cards I didn't have yet, so a big thanks to him. Here are the cards he sent, this will be long, because I haven't gotten to the point where I learn it's better to scan your favorites and post them, NOT all of the cards, hahaha. 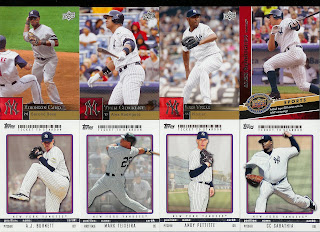 This first group has some cards from the Ticket to Stardom set and some 09 Upper Deck. I actually needed the Cano, call me a Cano collector, not having an Upper Deck base card. I like Ticket to Stardom, unlike most of you, it has a cool feel to them, and I needed 3 out of those 4 I think. 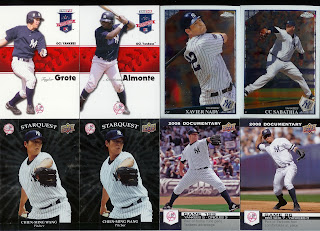 This next set has some Tristar stuff, a set I have never bought. I need quite a few of these. Topps Chrome was great in 2009, and I will eventually get around to collecting the set. Some 08 Documentary cards were mixed in as well as two Starquest Chien-Ming Wangs. Please take a moment and click on this picture above. Tell me there is no difference between the 2 cards. Apparently one is the Blue Uncommon and the other is a Silver common. I don't see one difference between them, anybody know anything about these? 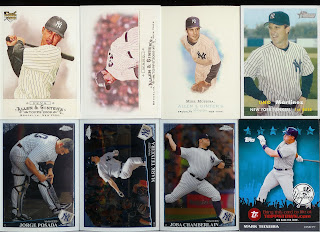 More Allen & Ginter, at least I needed them for PC, since I own over 450 2009 Allen & Ginter cards right there. I have a signed card of that Mussina, from a contest at 30-YOC once. I didn't have the Tino too and that is a really nice card. 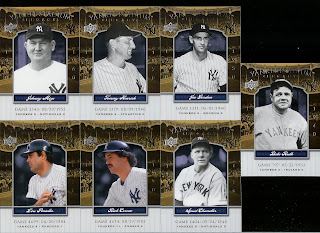 A bunch of Yankee Stadium Legacies, I have maybe around 75 of these, and I'm actually not that bored in them, if you have any please let me know. The only thing I didn't like was that every picture was used for at least 25 cards, so that is kinda boring. I really like the Ruth though, my favorite of the bunch. 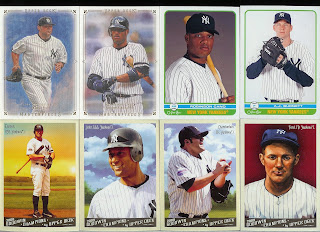 Masterpieces is the greatest set I know, and it shows here. That picture of Joba amps me up, just looking at it! I really enjoyed O-Pee-Chee this year too, it was very simple but it worked. Lastly, Goodwin. I think I need like 2 more cards to finish off the team set and this little group helped that. I needed the Jeter, Damon, and Joba, and the Ford is soon going to be sent off through the mail since I have 2. 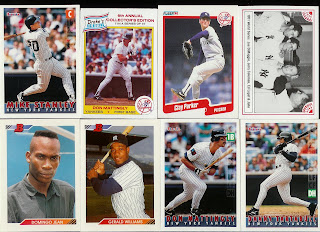 Some 80's and 90's mixed stuff here, that guy in the bottom left corner creeps me out. That Bowman set was weird like that, but one of the best current rookie cards out there shows the legend all dressed up. At least give him a hat! 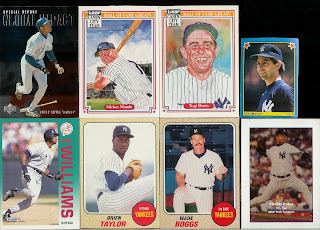 More 80's and 90's, lovin the Yogi Berra and Mickey Mantles. I also like the Bernie card, didn't have it. I don't know where I could find the 3 next to it if I didn't have good ol' Night Owl on my side. The 2 based on the 1968 Topps set with Boggs and Brien Taylor are from a magazine, and the Irabu is from some other thing. 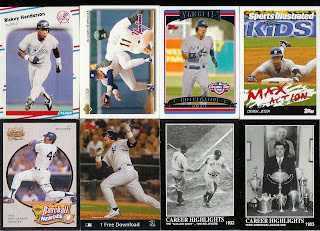 In this next group, we have 2 nice Babe Ruths, a Rickey Henderson, a Jeter I didn't have, and a Reggie Heroes card. Also an A-Rod iTunes download card, which I've never seen. The Babe cards are awesome, I gotta get more of those sometime. 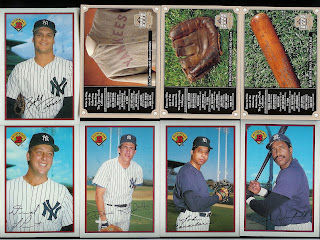 Some Bowman cards, including Dave Winfield, Dave Righetti, and a few others. The other 3 are some sort of advertisements to some Upper Deck giveaway or something. I hate getting cards that are a tad bigger because they look annoying in my box, so I keep a seperate pile for those. I'll have to show you guys my Yankees box, sometime I guess. 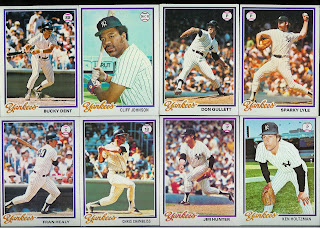 A bunch of 1978 Topps, and I don't think I had any of them! I really need to get a headstart on a vintage collection, it's kind of weak from a Yankee perspective. My favorite is of course the Sparky Lyle, he's one of my favorites from the past, and I really like the Catfish Hunter too. Topps refused to put Catfish on the card, it must be easy on eBay to steal a card of Jim Hunter. 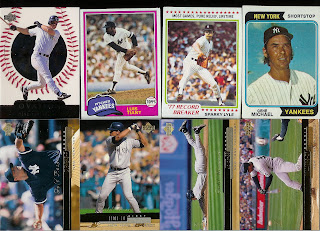 I know, I grouped the cards terribly. As you see, a 1974 Topps Gene Michael goes really well with a Ricky Ledee Upper Deck card. Again, more nice vintage, but my favorite here has to be the Paul O'Neill. I love cards that have baseball seams sticking out, like 09 Sweet Spot & 08. 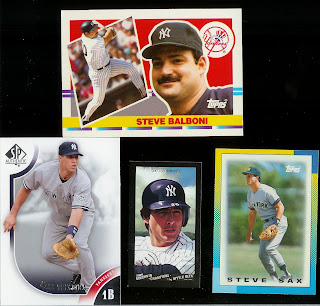 Again, more terrible grouping. A big card, 2 little cards, and a regular card, all from different times. The Balboni is cool, don't have too much of him, and the Tex is nice too. In all honestly Steve Sax is boring, and Bucky Dent is my magnet from Goodwin. I now have at least 3 of his base cards along with the mini, the Gypsy Queen mini variation, and I hope that will be it. 1 home run gets him into this set, 1 HOME RUN!!!! It was a good home run though... 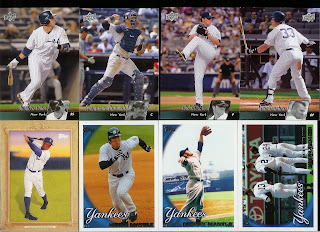 This trade started when Greg opened a rack pack of Topps and Upper Deck from 2010. I saw the Swisher and jumped on it. I also requested the Hughes, the Yankees checklist, and the Granderson, but he threw in a few more. Sweet! I can't get enough of this years Topps set and Upper Deck is pretty nice too. Turkey Red is starting to get old, so I kinda hope they stop after this year, but I'm still gonna try for that set. Mickey Mantle has a cool picture this year too, but I'd really wish they'd stop this tradition as well, and make him a short print. I honestly don't get why they do that already. 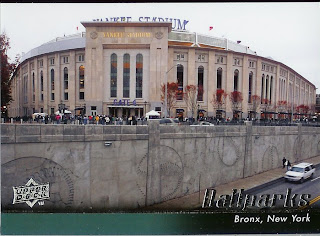 Easily my favorite Yankees card this year, a Ballpark shot of Yankee Stadium. I actually like how Upper Deck did this set because they chose pretty good pictures. I can't tell, but is that the old Yankee Stadium behind it? I'm honestly not sure, but I should know. I don't think so but just wanna make sure.

Thanks so much for the package Night Owl, I'll gather some cards for you and have them out eventually! See Ya!
Posted by Drew at 7:06 PM