Hey guys, Drew back here, got a trade in from the Sports Card Forum. I make a ton of trades on that site, and it really pays off. Here is what I got for jersey cards of Hunter Pence and Craig Biggio: 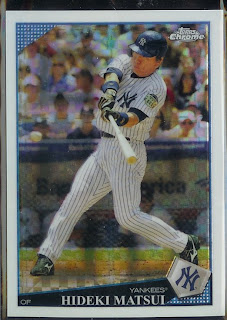 2009 Topps Chrome X-Fractor Hideki Matsui
My 1st X-Fractor from 2009 Topps Chrome, and it's nice. It stinks to see Matsui as an Angel but at least he's not a Met or Red Sox player. I've always thought x-fractors had a cool design and although it's been a little overused I still find it pretty cool. 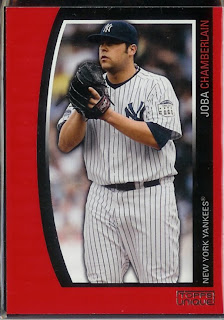 2009 Topps Unique Joba Chamberlain Red Parallel /1199
Another pretty nice card of a player whose cards are worth too much but isn't bad overall. Joba is young and his value is a little too high but I like him and I hope he does a good job wherever the Yankees put him. I see him as the Yankees next closer after Rivera, if they don't trade him, that is. This is a pretty cool card from one of the least popular releases of 2009, Topps Unique. The design is cool but the concept is stale. Aren't the same cards in Triple Threads? 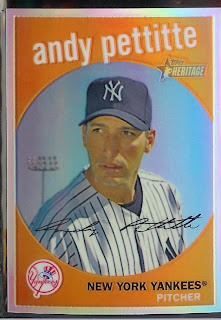 2008 Topps Heritage Andy Pettitte Chrome Refractor /559
This is a really nice card, best out of the 3 shown so far. Pettitte has always been my favorite lefty and he has left a great legacy in New York. Although he admitted to using HGH, I forgive him and I think if he plays more years and gets up there in wins that people may talk about him as a Hall of Famer. Topps Heritage has done an amazing job the past few years with their sets, and this card does not disappoint. 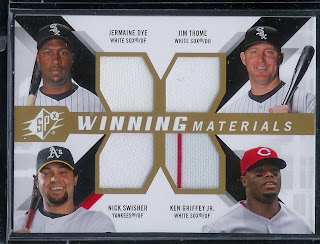 2009 SPX Winning Materials Quad Jersey
Jermaine Dye/Jim Thome/Nick Swisher/Ken Griffey Jr.
Now this is one of my favorite Swisher relics in my PC, especially because of the men on the right side of the card. This is my 1st Griffey Jr. relic and I'm really happy to have 1, he's by far the greatest player of the 90's decade and one of the Top 5 in the 2000's as well. If only he avoided injuries, he may be the best of all time. Overall, the design is nice, and I think SPX was one of the best sets of the year in all honesty. I've opened many packs and pulled many hits!