Awesome Check out my Cards Purchase!

Hey guys, Drew back here. Well, it was a short week of school but it took forever to go by. I made my fantasy league, and I have about 6 packs left in my box. I'm sending a new through the mail out soon, so I've been busy. But, I've posted a ton lately and a lot this month, which is nice! I've been struggling to keep on track but once I got back on track, I got behind again. Check out this sweet package that I used Check Out My Cards store credit for, I got the $ for my report card grades. 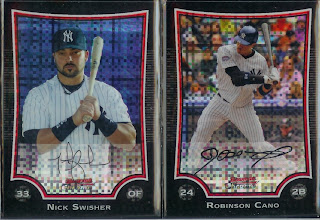 2009 Bowman Chrome X Fractors /250:
Nick Swisher
Robinson Cano
We'll start off with these. I don't have many nice x-fractors so this is cool. I love these cards! I wanna get a basic Swisher and Cano rainbow with the set, for Swisher I still need the base, refractor, gold and blue, I have the orange. For cano I need the blue, gold, and orange. Red will be tough to find for both, so I made the lists shorter. I really like this set and these cards only cost me a few bucks. 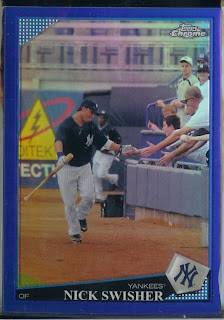 2009 Topps Chrome Blue Refractor /199:
Nick Swisher
Now, as I said in my box break review of Topps Chrome a while back, these blue refractors are AMAZING looking, and I pulled a few out of my box. Unfortunately, I didn't get a Swisher or Cano, and when I saw Swisher's on the site I jumped all over it. It was worth it. The picture on this card is hilarious and makes me laugh every time I see it. Well, that's all for Player Collection pickups, here is the rest of the loot. 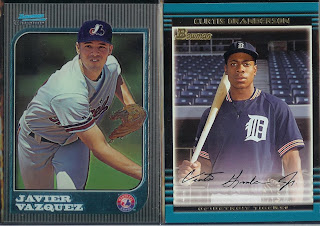 1997 Bowman Chrome Javier Vazquez RC
2002 Bowman Draft Gold Curtis Granderson RC
I needed these for the Yankee Rookie Card PC, which has an updated list of current Yankees rookie cards that I need. Only 2 more (Randy Winn & Sergio Mitre) and I'll be up to date. I will need to upgrade a few of them, but for the most part this collection is nice! Vazquez has had a pretty solid career, last year being the highlight, and now he's a Yankee (again). I've always liked Granderson and he has had a nice short career right now. I got him through the mail last year, and he's seemed to be a really charitable and nice guy, and hopefully he can help donate another World Series ring to New York! I'm pretty sure these are true rookie cards, and they are nice! 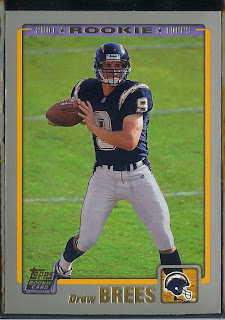 2001 Topps Drew Brees RC
After the Saints won the Super Bowl I ran over to COMC and had to make an offer on this card. I barely had enough store credit, and I actually needed to take 3 cards off the shipment so I didn't go over on price. This is a really nice card, and I really like Drew (not just because he shares my name). He deserved a ring after a very successful career and I'll be rooting for him for the rest of his career. Congrats again Drew! 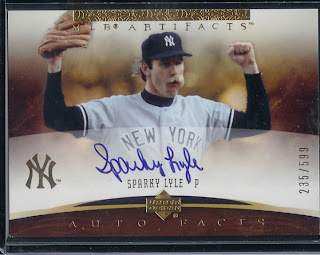 2005 UD Artifacts "Autofacts" Sparky Lyle Autograph /599
When I saw this I knew I needed to have it. And $6.00 later it was mine! Sparky is probably my favorite Yankees pitcher that played before I was born, along with Whitey Ford, Ron Guidry, and Goose Gossage. The design is sweet on this card, and it is on card, which is a plus! It also doesn't have that annoying green and yellow old Upper Deck logo on it, the gold foil makes it look so much better. Overall, a heck of a card considering he's one of the Top 5 Yankees relief pitchers of all time. 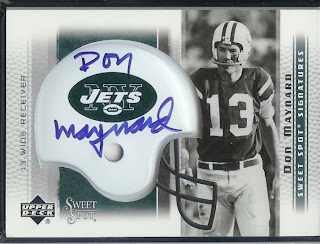 2005 Sweet Spot Signatures Don Maynard Autograph
Probably the sweetest Jets card I own right now, and it was only $10.00. Maynard is a Hall of Fame wide receiver who played for the Jets during the same time and before Joe Namath. He even played when the Jets were the New York Titans. He is one of a few Jets Hall of Famers, including head coach Weeb Ewbank & Broadway Joe, well, along with Curtis Martin too when he gets in. As for the card, the autograph is really sharp, and he signed the plastic helmet perfectly. From what I've seen this set has some killer looking autographs. The hole in the helmet obviously is part of the helmet, not an error. 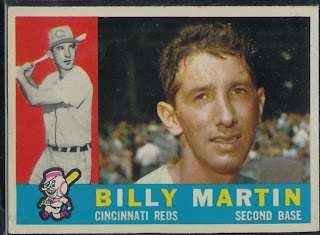 1960 Topps Billy Martin
This is one of my Top 5 oldest cards right now, and although he is not in a Yankee uniform, it was worth it for $5.00. Not only that but it is in MINT condition, it looks like it could've been part of the 2009 Topps Heritage set. If I ever get the money I will probably get this graded but that has yet to be decided. Doesn't it cost like $30.00 to get a card graded? I love only this card, Billy should be a Hall of Famer, but he is in a long list of "should be's" so chances are he won't make it. My dad loved Billy when he was manager of the Yankees, and I enjoyed watching that ESPN show "The Bronx is Burning" that was about him, George Steinbrenner, Reggie, and the rest of the 1970's Yankees.

Wow, my collection is growing every day thanks to you guys, and thanks to my grades, haha. I think I'm caught up now but still have a Topps box that will be finished within days. Maybe even tomorrow. See Ya!
Posted by Drew at 4:54 PM