Hey guys, Drew back here, with some mail from Tony at Mike Pelfrey Collectibles. He told me he was sending me some stuff but this was beyond any regular stuff, one of the best packages I've gotten if I must say so myself, especially not knowing about any cards going my way. Be sure to check his blog out, he deserves some credit and is a great trader. Here are the cards he sent me: 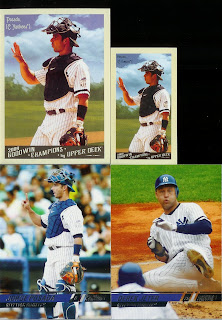 First off, he sent me 2 needed 2008 Stadium Club cards, Jeter and Posada. Then he sent me 2 more I needed from Goodwin, the Posada base and mini. Funny how all the Posada's have a similar pose, mixed between 2 different card companies at that. Mix it up guys! 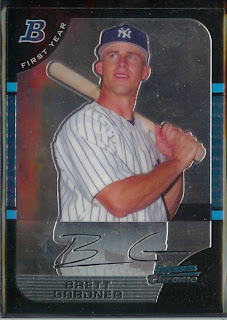 Next was a very nice Brett Gardner rookie card. Someday I wanna get his autograph, he's just a beast on the field, he is so fast! I have the regular Bowman Draft card of his, well, the gold parallel (the thick one), so I have 2 different rookie cards of Brett "The Jet" Gardner. Awesome! 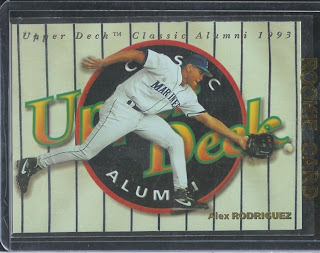 The next one is awesome, and sadly it is behind 2 other cards in order, and it is awesome. I don't know for sure if they call this a "true" rookie card, but it is from his rookie season and that's all I care. This card is a pretty cool one overall, the background design was a hint to the fans that he'd be wearing pinstripes about 10 years later. Rodriguez has had a successful career, although the steroid issues have been critical in his fame. But I give him credit, he gets spotlighted on every move he makes. I kinda feel bad for him, as well as guys like Jeter, Tiger, LeBron, Kobe, and a few others. Well, some guys like the spotlight (yeah I'm looking at you Ocho Cinco) Getting back on track.... 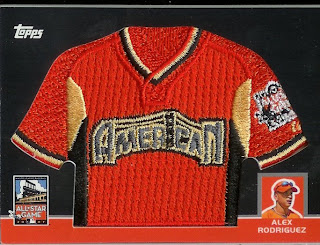 Now this is a really cool card. It is a manufactured jersey of A-Rod from 2008 Topps! I'm pretty sure these cards go for a high price, so thanks man! Now, just out of curiosity, is this all manufactured, because the back says this:

"Congratulations!
You have just received a commemorative
All Star Game Patch Relic card from
2008 Topps Baseball Series 1.
Featured on the front of this card is
Alex Rodriguez
who represented the
New York Yankees
in the 2007 All Star Game"
Now, next it says the whole "Topps pledges to bring you close to the game" and all that stuff, so is it all manufactured. I was thinking maybe the orange jersey is real but probably not, since it's only numbered to 539. It is one sweet looking card relic or not! 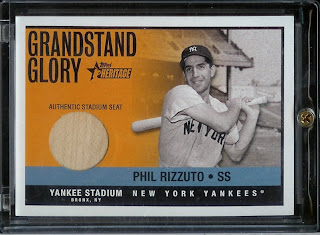 So, I was fooled because I saw Phil Rizzuto first, but at least the young 2001 Topps Heritage realized collectors wanted to know what they're relics are of, unlike this recent group of idiots that claimed there were more Babe Ruth bats than actual in the cards! I've wanted Yankee Stadium pieces for a while. First I wanted the dirt for $100, now I want a chunk of the centerfield black for $100. Boy, Steiner can really get me going. But for now, I'll need to stick with tiny pieces of relics. Boy, I hope those seats were sanded back then, or else the splinters would raid my pants! I really like this card and will have to force myself to keep the card inside the holder so I can't feel the relic so constantly that you can't smell baseball anymore, instead you smell my stinky fingers, which I do to all my other Yankees relics, whoops.

Thanks so much Tony, and everyone else PLEASE go check out his blog. See Ya!
Posted by Drew at 8:55 PM