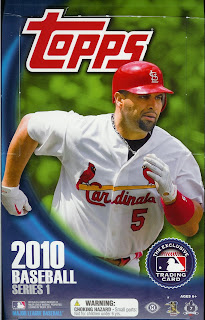 Hey guys, Drew back here, with part 2, the grading, of my 2010 Topps box. I am starting to look for tradelists for this product and kinda ignored all the lists for this set while I was opening the box, and don't know where to find them. Please comment if you know of any or have a tradelist up for 2010 Topps. As you saw I picked up a few nice cards off eBay last night after losing 3 in a row, and got them for cheap. I have some mail going out today, including 3 Spring Training TTM attempts. Oh yeah, and NO SCHOOL TODAY W00T!!!!! Ok, getting back to the review, here it is, hand in your papers class, it's time to grade some 2010 Topps!

Design: I really like this new design, and although I've liked it from the start, it's grown on me still, and I may like it more than 2009. It's a pretty simple design, and I think Topps used huge team logos just to rub it in Upper Deck's faces. The photography is great, I really like the Prince Fielder card, and the other one of him with Ryan Braun is cool too. Randy Johnson's card as you probably have seen is really cool looking too, and Matt Kemp has a nice card as well. Many people say some of the pictures are kinda blurry or screwed up but I haven't seen one card like that yet. It seems as if nobody wants to appreciate this set, just try to find the bad things about it. There are no doubt way too many insert sets. I wanna try to collect them all as much as I can, but that will be an extremely hard task. I have a ton of ToppsTown for trade, I completed the set in the box alone, so the blaster ToppsTown and the other 6 ToppsTown duplicates I pulled are all for trade. I'm planning on posting that later. I really like the Legendary Lineage design, and the Tales of the Game design doesn't look spectacular but the photography and moments used make up for it, I think it's my favorite insert set. History of the Game gets really boring in some parts, but some cards are really nice as well, like the Nolan Ryan & Roger Maris cards I pulled in the box. Peak Performance is only saved by the photography and may be my least favorite, and I don't get why they needed to make the relics on those cards, they don't look that great. When They Were Young is pretty cool too, but the player selection isn't great. Most of them are scrubs but it's cool getting cards of Wright, A-Rod, Pujols, and Ortiz when they were little. Design Grade: B+ (for everything combined, base design is an A)

Price: The price is a little high at first on many products, and this is one of them. In a product where you don't get much value back, it's pretty high. I got my box for $55 (including shipping) from Blowout so that was pretty good, but you'll see these selling for $60-65 and that's too high. Considering you'll only get 1 card that could add up the value, unless you pull something additional, it's not a product that you'll make your money back on. But that is NOT what the product is about! With this product you want to have fun ripping 36 packs and pulling some cool inserts of old timers, with chances of cool pulls. Eventually, you can get the past Series 1 boxes for much less, ala, here and here. Given that, Price Grade: B-

Hits: You need to get really lucky here to be happy with your 1 per box hit. Most likely you'll pull a scrub auto, or even worse, scrub game used, but to add to it, pulling a nice gold border, a black border, jumbo patch, silk, or short print, and you have a nice box. Unfortunately I didn't pull any of those, and had a Brian McCann relic. He isn't bad but I was hoping for something nicer. In the jumbo boxes you can get those manufactured hat logos, which are really nice and sell very well. I want to get one of those, but since they is no Cano or Swisher I'm not in any rush to get one, I'll wait for the price to drop. The Legends Short Prints are really nice as usual and you could at least get $10 back on a card, depending on the player. Then you have the Curtis Granderson short print, where they photoshopped Grandy into a Yankee uniform, similar to what they did with CC Sabathia last year. I hope to get that Grandy eventually, to add to the CC that I have. Lastly, with the short prints, there are the Yankees Pie in the Face cards. While it's a cool concept, they are selling extremely well, and I am praying they turn into a card like this, or this, in 2 years. The worst part is that Cano has 2 and Swisher has 1, and it would probably cost me close to $400 to get them all, which I don't plan on doing. Hits Grade: C+ (my Box: D+)

Overall: Well, all in all, this is a nice product. I have wanted to try a box of flagship for a while now, and I finally pulled the trigger on one. If anyone has the Swisher relic, one with dirt on it in particular, like this one, I'll trade my McCann and maybe a gold or two as well for it. It wasn't a great box, but the inserts were really cool and I enjoyed opening the box, and took my time, which is all that matters (for the most part, unless you get screwed). I took a week opening the box, and if I didn't have any days off last week I probably would just be finishing. I would've liked a black border or silk, but I'm stuck with Brian McCann, which isn't too bad of a thing. I will trade the McCann for anything Yankees or Jets related. Anyway, enough talking about trading, my overall grade for this box is.... Overall Grade: B+ 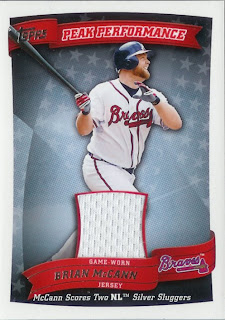