Cards from the Wax Wombat!

Hey guys, Drew back here, with some cards I got today from the Wax Wombat. I asked for some cards to trade and he said he'd send me them for nothing! What a great guy! I'll get you back and you know it, once I find out what it is that you want. Anyway, here are the 8 cards he sent me:

2007 Upper Deck Brian Bruney: Wow, nice card. I tried to collect Bruney at one point as you probably all remember, and it kinda failed miserably. I ended up getting 2 card autographs in my pursuit and only 3 or 4 others. That's what I get for collecting a middle reliever. Although he's a National now, he will always be one of my favorite pitchers, such a nice guy when I met him.

2007 Topps Andy Canizarro: Don't have much to say about this card other than the fact that he was not included in my extremely large boatload of 2007 cards I got back in the day. Now he is a 31 year old free agent who has had 2 career hits, 1 for a home run. Not a bad ratio, well, in spite of the .222 career average. He played 1 game in 2008 for the Rays before being cut and hasn't played since. Poor guy can't get a job, he's 2 for 9 career and is above the Mendoza line! 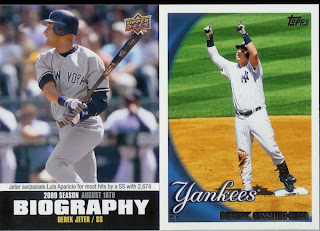 2010 Upper Deck Derek Jeter Biography: Cool, my 1st 2010 Upper Deck card! This insert reminds me a bit of 2008 Documentary, which isn't a great sign but it looks better, so that's at least good. I think they put more effort in here, which can always help, and the card picture is very nice. Upper Deck gets in a ton of trouble, but nobody can underestimate their photo taking abilities.

2010 Topps Nick Swisher: Nick Swisher, where have I seen this card? Last post actually. But this works out well in a way because now I have one for the set and for my Swisher PC. But... I'll only have a hundred more of this card after this year. Topps has done well picking Swisher photos out, some unique looking cards there. 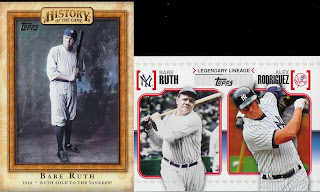 2010 Topps History of the Game Babe Ruth: I took a couple shots at getting 2010 Yanks when I knew I was getting a box, and I hope I don't pull another, because I want to complete these sets. This card is about Ruth's issues with the Sox and joining the Yankees. Really cool photo and really cool card.

2010 Topps Legendary Lineage Ruth/A-Rod: I am a big fan of this insert set, all the combinations make decent sense unlike another company I know (you know who I'm talking to Mr. Ballpark Collection), and Topps picked cool pictures too. They tried to sorta get a similar pose too I can tell, take a look for yourself sometime. So, here we got Beer Drinker and Juice Injector on one card. Cool. I still don't see A-Rod as Babe Ruth, but I guess some people do, and at least they didn't pick Pujols. 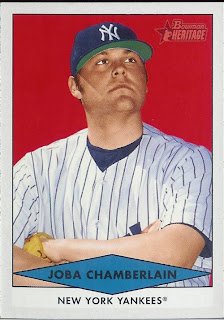 2007 Bowman Heritage Joba Chamberlain Rookie Card: I have a few Joba rookies so far and I didn't have this one. Nice photo of young Joba without the 5 o'clock shadow and scary/intimidating looks on his face. Just young happy Joba. He is apparently going to fight for the 5th starter spot with Phil Hughes. I want Hughes to win. Why? Joba is better in the bullpen and I want to give Phil one last chance as a starter.

Thanks Andrew for the cards! See Ya!
Posted by Drew at 8:34 PM