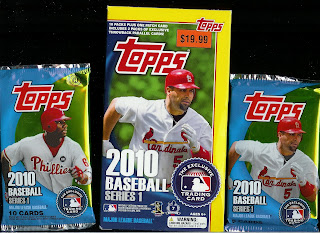 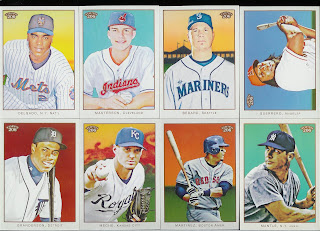 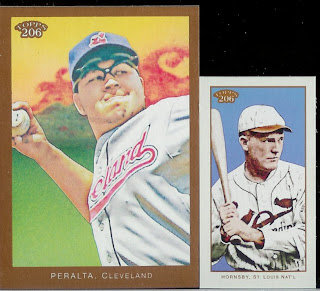 And now the combined 2010 Topps loot, 2 of the blaster packs had the retro feel to them, and 1 separated pack had one of those commemorative patches that I seem to like: 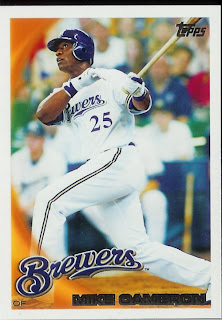 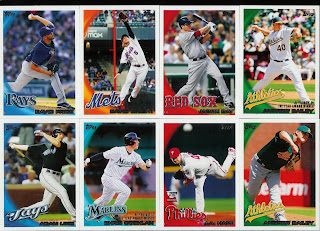 8 of the Nicer Base Cards in the Bunch: (top) David Price, David Wright, Jason Bay, Andrew Bailey Rookie of the Year, (bottom) Adam Lind, Chris Coghlan Rookie of the Year, J.A. Happ, Andrew Bailey. There are some nice pictures in this group and were some of the bigger names I pulled. The base design shows a team color fading in from the top left and bottom left corners with big flashy team logos sticking out. The names are in foil as usual and Topps does a great job with the photography. I like this set, but not as much as 2009. 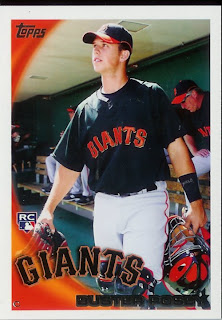 Buster Posey RC: Awesome, pulled this one in the 1st bunch of packs of the year. I think this guy is gonna be good, can't wait to see how he does in the bigs.

3 Franchise History Cards: Rockies, Astros, Cardinals, and I pulled the Rangers too, but it didn't go well with the scanning. The cards show either multiple players on the team or maybe the stadiums. On the back it shows Leaders from the team's franchise history, current history, and last year's team leaders. They show pictures of the managers on the back picture. 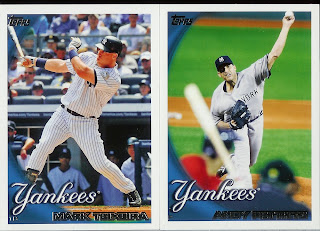 2 Yankees Base Cards: Awesome, a Teixeira and a Pettitte. Tex was the 1st one so that was cool. He has a nice picture this yearm and the Pettitte is different and certainly ain't a work of art, but is pretty nice none-the-less. 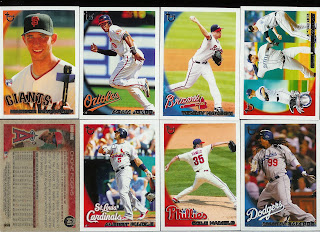 10 Throwback Cards (8 Pictured): Yeah, I had 2 nice packs with these. I really like the Bumgarner rookie, he's gonna be good, and I also got a Manny, Cole Hamels, League Leaders, Pujols, and Tommy Hanson. Not bad! I like these, and sorta wish Topps just made the set like this all together, like the good old days. 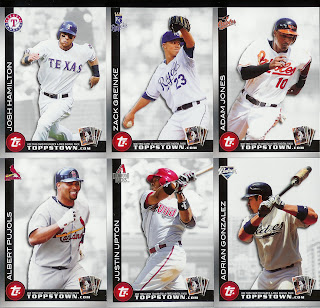 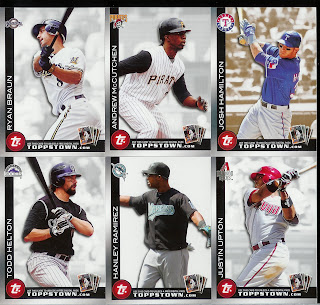 12 ToppsTowns: Yay! Insert Time! My favorite part about the Topps flagship are the inserts, and I got a nice stack of them. We'll start with the ugliest and work our way in. Topps still hasn't noticed that kids do not buy cards ever and I may have the biggest kid collection that exists right now. I'm up there, to say the least. I'm not young enough to care about these cards, but I will admit Topps has gotten a little better with these every year. Why? More photo and less ToppsTown garbage information on the front. Now if only we can move all of that stupid information to the back of the cards! You get 1 in EVERY pack, so get used to them (again). I got 2 Justin Uptons, and 2 Josh Hamiltons, one being the gold Topps Town version. These are for trade if you want any, you know what I want. 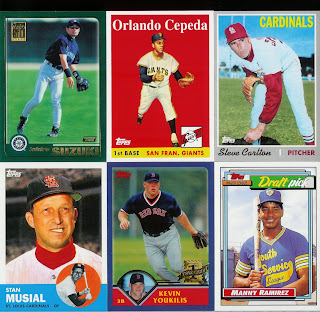 6 Cards My Mom Supposedly Threw Out: Yeah, my mom hasn't thrown these out yet, but I kinda wish she burned the middle one on the bottom row, put the ashes in an ash tray, stuck the ashtray in the freezer, smashed the ice created inside the ashtray on the ground, and took up the Empire State Building, and down, the hard way. Yes, that is what I could do to a Kevin Youkilis reprint rookie card. This set is rather pointless, and Topps is so great at showing us the past, but, question for yall, do you think 20 years from now we're gonna find a 2010 Topps David Wright base card reprint in our packs? All Topps does is appreciate the past, and they really say, What future? now and pray that Bumgarner may have this card as his big rookie card some day. I guess if you don't get it Topps looks too much into the past and very little into the future. I wish I could get my hands on that Ichiro someday, and I very well may send that Musial to try for ttm along with the custom soon. 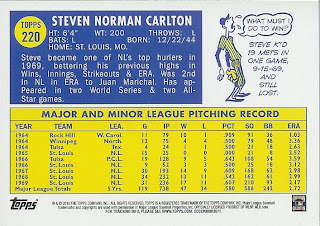 And look, Topps wasted time trying to actually show the REAL back of the cards to us. Short Print! (Drew gives 2 thumbs down motion)

3 Peak Performances: Wow, this set is kinda broad, but I somewhat like it. I love the Rivera card, and Mel is cool, but please let's start a little counter of Jackie cards pulled in these packs, shall we?

3 Legendary Lineage Inserts: May be my favorite new insert, simple yet nice, and I love the Gehrig/Teixeira one. The other two I will offer up. Here's Jackie! 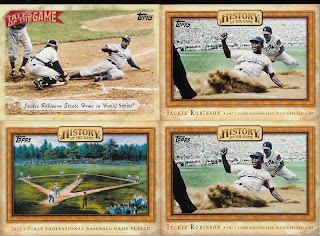 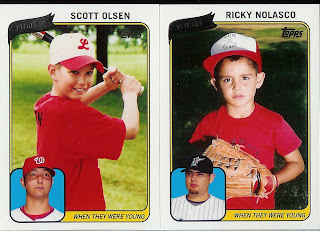 2 Little Kids Inserts: I like this insert, and I want one of me! Too bad it's only Ricky Nolasco and Scott Olsen, yawn.... NEXT!!!

3 Turkey Reds: 2 Brewers and Nolan Ryan. I always will charish this set and I AM NOT TRADING THE NOLAN because it is a sweet card of a Hall of Famer, but Gallardo has permission to leave. 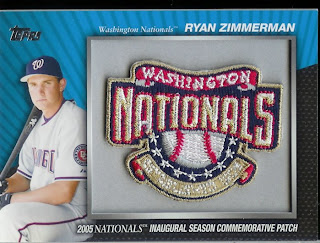 Ryan Zimmerman Commemorative Patch: When I got this I'm like "Not bad". But then I looked at the checklist. I think I got the WORST ONE IN THE ENTIRE SET!!!! Crazy. I like the Nationals patch though, it's cool, but it is for trade.

Not bad, don't think that was a rant though. I'm tired, and I feel like running over every set in anger, don't know what it is but I wanna sleep. LMK if you want anything. Oh, and I got one of those Million card sweepstakes things too, looks pretty cool, I'll probably get a Jackie, watch me.

Did anybody have too many inserts of the same player like this before? It's kinda weird how I got 5 inserts of him in one blaster, 2 in the same pack, 1 in a hobby pack. If I get any more he may be called my stalker. I'm sure Night Owl likes the sound of that though. Hahaha. See Ya!
Posted by Drew at 6:48 PM