Hey guys, Drew back here again, with probably my last post of the day, because today will be really busy. I gotta do homework, including a Spanish project, go to church at 10:30, do chores, shower, and at 4:00 go to an open gym for baseball. Ugh, just writing that huge sentence makes me sick to my stomach. Anyway, yesterday William of foul bunt, who I will advertise again any second now, sent me some

Told you it could happen any second, so yeah, he sent me some cards, just some mixed Yankees, just out of being nice... awesome. Here are the cards: 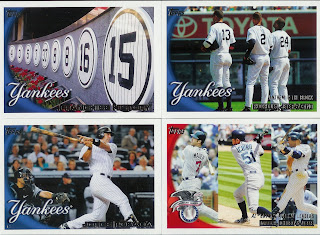 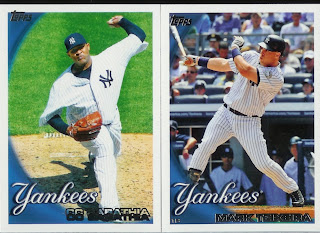 First off some 2010 Topps, all are doubles but that's good because I needed one of each for the Yankee Collection after I got them for the set. Take a look at the CC though. There seems to be a little printing issue, you can click on the picture to see it better. Topps printing press FAIL. 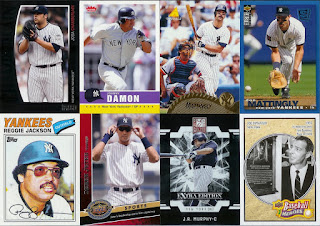 A bunch of random stuff at once. I needed the Joba Unique, which is a nice card. I do have the red parallel of it so now I have 1 of each. The Damon is cool, although he just signed a deal with the Tigers, which disappoints me, but we do have Granderson now. Next are 2 nice needed Mattingly's, as you may have seen he is on my PC's list on the top of the sidebar now, I'm trying to get a bunch of his cards now. Cool! On the bottom row, we start with a Reggie Cards My Mom Threw Out, which I have 2 of now, again, 1 for set, and 1 for PC. Next is a Jeter 20th Anniversary, which I didn't have, and it's a nice card talking about him becoming the captain. Oh wait, it's 20th Anniversary Retrospectrum. Good idea Upper Deck, bad job making it work. Next is a card of J.R. Murphy, who I haven't heard about but maybe he's good. It's from the new Donruss Elite set, and those are some awesome looking cards! Lastly, we have a 2010 Upper Deck Joe DiMaggio. I wanted a bunch of these, I have 2 now, and this one is really cool. I love Heroes, and Joe DiMaggio is the man, so gotta get the rest of these. Sorry if this sounds like I'm in a rush, oh yeah, I am in a rush, so please bare with me. 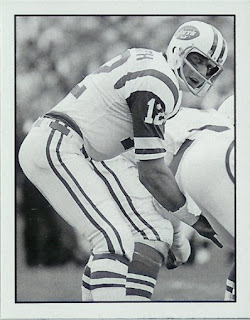 Next we have a cool football card from a baseball set. 2008 Goudey is still a favorite of mine, and I still am trying to get those stinkin short prints! This Hit Parade of Champions card isn't my 1st of the subset, but I will admit these cards are really cool. I have a Michael Jordan double too, and that's for trade. As for Joe Namath though, this is my 1st of it and it is an awesome card! It's unique, bigger than an Allen & Ginter mini but not by much, and it's a square. Joe looks cool as usual on this card, and it is one of my favorites that I have of him now. 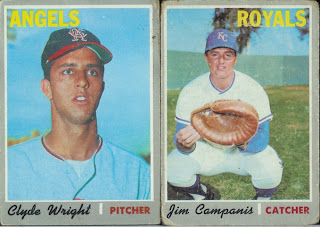 Next up are two vintage cards, from 1970. I'm still not all that sure why he sent these, but they're cool. I love getting some old school cards, even with damage, but, not too much damage. I don't know the players but it's cool to get something different.

Lastly, he sent me 3 Cano's, I have only the Fleer one. I swore I had the 206 card but I guess I didn't, I have the bronze border and the mini cycle, but I need the rest. Co-Signers may be the most annoying set on the planet, well, along with Moments & Milestones and Documentary, but this card is really nice. Just because it's annoying doesn't mean I don't like it!

Thanks so much William, again, everyone check out his blog, he's a great guy and a great trader!
Posted by Drew at 9:11 AM