Hey guys, Drew back here. Although I am extremely excited for baseball to start, I still haven't lost much interest in basketball over the past few weeks. In fact, after this card I also have another Knicks autograph coming in, of one of the better guys to get! Anyways, besides for last night's loss 100-90 to the Hawks, the Knicks have come alive under their interim coach Mike Woodson, winning 9 out of their 11 games with him in charge. One of the Knicks best shooters, if not their best, is the guy I'm about to show you a card of. There was Linsanity, and then there was Novakane! 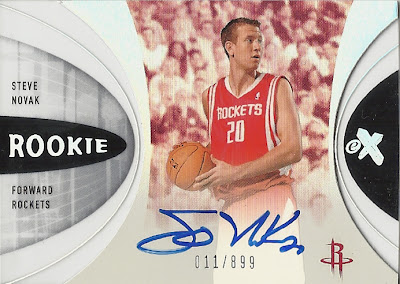 Out of 2006-07 Fleer eX, I managed to pick up this very nice Steve Novak rookie autograph. Sure, the nickname is pretty darn stupid, and sounds like a John Sterling thing, but boy can this guy shoot a three pointer. This season his three point percentage has been astounding, at 48.2%, while the next closest players have between 30 and 33% on the team. He only plays about 17 minutes a game, but when he comes in the opposing defense needs to keep him from taking the big shot. His story certainly is an interesting one, in which his rough rookie season brought him into the D-League, until he was traded to the Clippers, where he did fairly well. The next season he was signed by the Dallas Mavericks, only to go back to the D-League, and then the Spurs. He was signed by the Knicks on December 21st of this year and has had his biggest role yet.
He's a very likely guy from what it seems, as are quite a few of the current Knicks players. I paid only a few bucks for this, so I couldn't really go wrong. It's actually a really neat card, as both sides of the card are clear, which you can see in the picture below. I'm glad I could add Novak to my basketball collection! 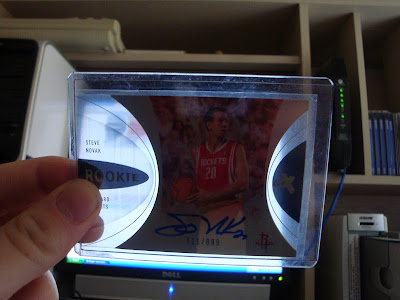