Hey guys, Drew back here! So not only did Dad and I go after quite a few 1961 Topps cards for our set, but we also went crazy with some 2011 Topps Tier One relic cards! Obviously, most of you know I suddenly received an urge back at the end of last year to try for the whole relic set, and you all thought I was crazy I'm sure. However, after this show, I feel confident that I could have the set complete by the end of the year if I really put a lot of effort in on it! One reason for this confidence is that one of my favorite vendors, Rich, was able to pick up the entire set for a discounted price, so he's been able to make us some great, great deals. Take a look at the cards he was able to help me add for a great price: 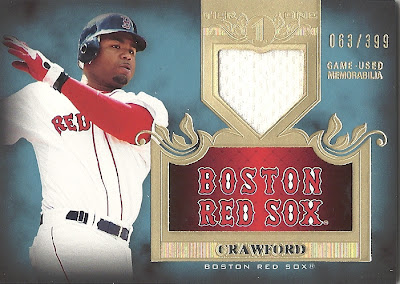 The first of many was of Red Sox outfielder Carl Crawford. I used to like Carl a lot while he was a Ray, but now it's awfully hard to continue to like him as he gears up in Boston every day. Well, when he's not injured. 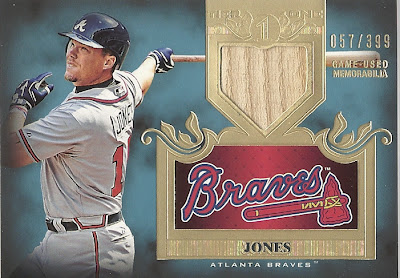 How can you not like Chipper Jones? I haven't gotten to watch a lot of Braves games over the years, but it's obvious to baseball fans throughout our country that he is one of the most respectable men to ever play the game. It was sad to hear that 2012 will be his final season, as he announced a few days ago. Without a doubt he'll be in Cooperstown one day. 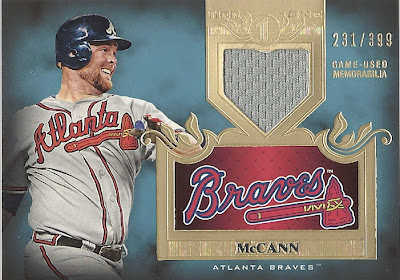 Speaking of the Braves, here is a pretty nice Brian McCann relic. McCann is one of the more underrated players in baseball today, and if I had to start a team today I would want him to be behind the plate. He's undoubtedly the best all around catcher in the big leagues, with Yadier Molina close on his tail. 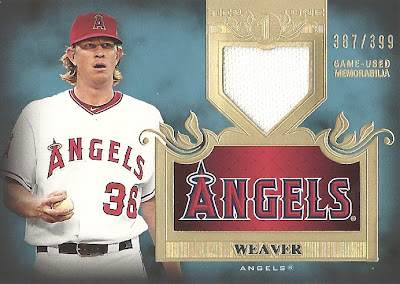 Am I the only person here that thinks Jered Weaver is going to have another Cy Young caliber season this year? I doubt it. He's been one of the best in the American League over the past few years, and with a revamped lineup containing Albert Pujols, I can see an awful lot of wins in his future. 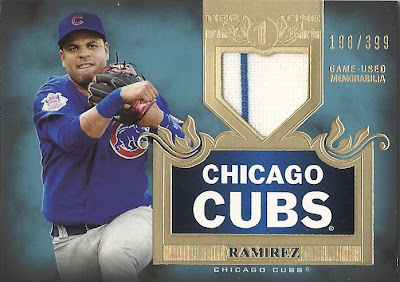 Aramis Ramirez was one of many players to switch teams over the offseason, landing a deal with the Milwaukee Brewers. I think he's bound for a nice year following his great 2011 season, due to the fact that he's in a very good lineup, even though he's no Prince Fielder. I like this card quite a bit because of the nice pinstripe from his Cubs jersey is almost going down the middle of the card. 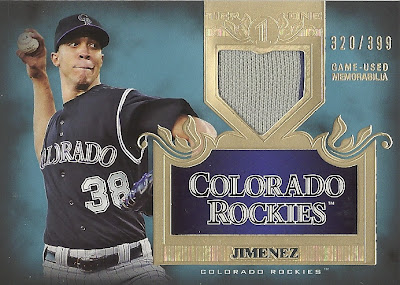 I really question the abilities of Ubaldo Jimenez. I feel like his 2010 season is going to be his best season, and that his move to the American League is only going to hurt him. He's a solid #3 pitcher in my book, but I think Cleveland surrendered too much for him last season. But what do I know. This card also has a pinstripe sneak into the corner, and although I'm not a big Jimenez fan, this is also one of my favorites in the bunch. 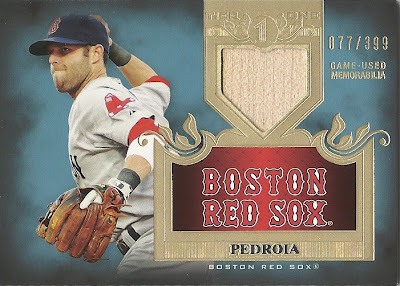 There's B.J. Upton, Kevin Youkilis, Jonathan Papelbon, and Carlos Zambrano, among many others in the game today. But, above all, Dustin Pedroia is my least favorite player in all of baseball. It's nothing against his work ethic, ability, and talent, but it's the fact that he is an annoying batter to face on the most annoying team (in my opinion) in baseball. Sox fans, I wish I could trade this to you, but I can't since it's part of the set. Oh well. 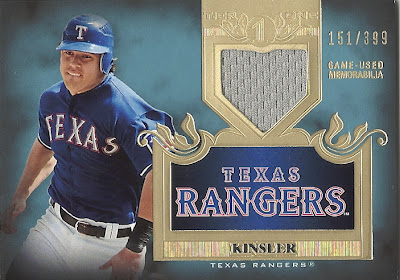 Ian Kinsler is one of those guys who I think benefits greatly from being in a very good lineup. He's a good all around player with the capability of being a 30-30 guy without question. In fact, he was one last year. Can he keep up this season? We'll have to wait a few months and see. 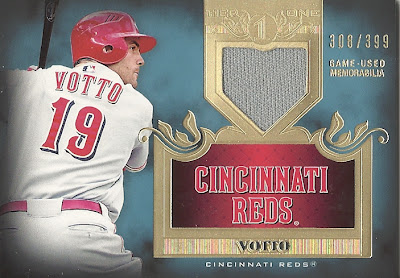 The last of today's players is perhaps the best of the bunch, in Reds superstar first baseman Joey Votto! Votto is one of those some what underrated but very likable guys in baseball, that does his job at a high level every single day. He's a great fantasy baseball pick if you're a fan of consistency, and has a good chance at bringing the Reds towards the top of the NL Central this year (if the Ryan Madson injury doesn't affect them too much). 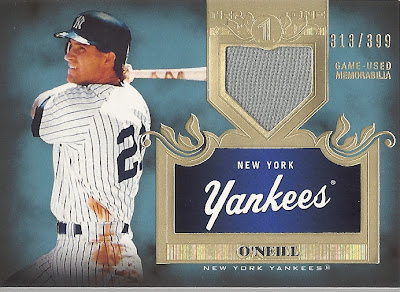 Dad surprised me with two Yankees Tier One relics I needed to end the show, and this was one of them. Nothing like a jersey card of "The Warrior", Paul O'Neill. I'm not all that sure why he fits in with all of the Hall of Famers in the set, but it doesn't necessarily matter to me, because I like him a lot. He's certainly better than some of the players in this set though, so I don't think it's much of an issue having him included. 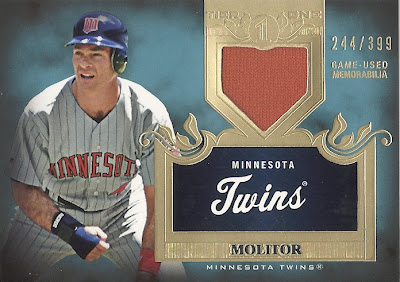 I really like this card, perhaps the most of any of the cards Dad and I acquired. It's a red Twins relic of Paul Molitor! Sure, Molitor isn't well known for his days as a Twin compared to his Brewers days, but any opportunity you get for a red relic needs to be taken advantage of. It really pops out compared to the other cards in the set. 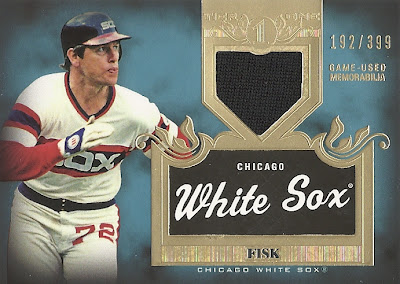 Speaking of rare relic colors, here is a black relic of a White Sox player! I bet you don't hear that everyday! The card is of Carlton Fisk in one of those interesting White Sox jerseys from the 80's. Gotta love it. My favorite part about this is that he isn't pictured as a Red Sox player, even though you can argue he was more well known for that portion of his career. A great catcher without question. 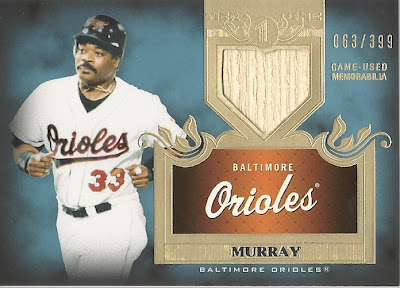 William, be jealous. Next is a bat relic of one of the best Orioles that ever lived, in Eddie Murray! Murray was often overlooked throughout his career compared to others from his time, but he wasn't overlooked when Cooperstown called his name. The only negative about this card is that his snazzy sideburns were gone by the time this picture was taken. Bummer. 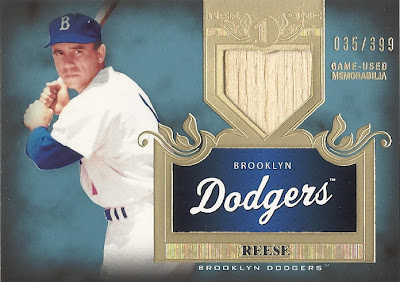 Now we're really talking, as next is a relic of Hall of Fame shortstop Pee Wee Reese. Reese was part of the dynamic Dodgers middle infield, sharing it with the beloved Jackie Robinson. He was known for always trying to help and support Jackie even though he had it rough in the beginning of his major league career. He's certainly one of the cooler names in the set, along with the next guy below. 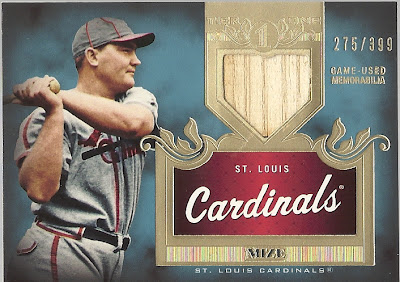 Former Cardinal, Giant, and Yankee Johnny Mize! When looking at Mize's career stat line: .312 lifetime batting average, 359 home runs, 10 time all star, I discovered that he was a complete player for his time. I drew a comparison to today's Joey Votto (if he keeps up for the rest of his young career), or maybe Todd Helton. But nobody knew how to win like Mize, who was a part of the Yankees pennant run in the late 40's and early 50's. This is really a beautiful card. 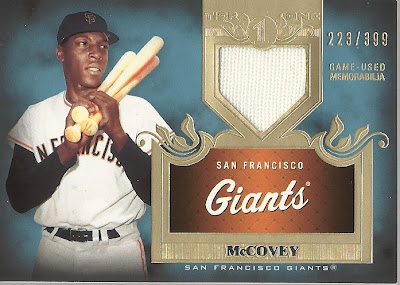 Next is a member of the 500 Home Run club, Mr. Willie McCovey! He is one of the most underrated players in the Hall of Fame in my opinion, mainly because he was second to Willie Mays through most of his career over in San Francisco. However, his 521 home runs, 6 All Star selections, and numerous other accolades make him one of the best to ever play. 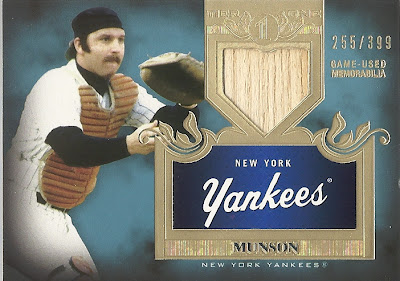 The final card was more expensive than all of the others, but fittingly so. The relic is of former Yankees great Thurman Munson, who will always be a part of my heart. I didn't grow up in the 1970's, but through watching a lot of old film and games, I realized that if you want to describe a perfect ballplayer, this guy was your guy. No, he didn't smack home runs out of the park every time he hit, but the guy worked his butt off every day and hustled in everything he did. Since the day I knew of Thurman Munson for the first time, I modeled my career after his in a respect. I'm not a catcher, but I realized it's okay to get dirty, and to run as hard as you can. It shows how much you love the game. Thurman's plaque would be in the Hall of Fame today had it not been for the tragic day of August 2nd, 1979, when his plane crashed and killed him. After that day, Yankees fans realized that if anyone was indeed "the straw that stirred the drink", it was him. R.I.P. Thurman, forever and always.
On a lighter note, these 17 relics bring me all the way up to 30 in total that I now have, out of the 50 card set. I'm still looking for three more dual relics, in Aaron; Mantle; and Ruth; but I'm very content being 60% of the way done already. It's coming around to being a beautiful set!
If anyone owns any of the cards that I don't have pictured on this page and is interested in trading me one to help me out with my set, please feel free to send me an email to yanks1996wsc@gmail.com! Thanks so much to everyone who read this, and once again to Dad for the tremendous help!
See Ya!
Posted by Drew at 7:36 PM