An Autograph of a Guy Who "Wants to Be on the Cover of Slam Magazine"!

Hey guys, Drew back here. I can not began to tell you how excited I am about the way the New York Knicks have been playing recently. I mean, to start, my mom even got me a Jeremy Lin "Linsanity" t-shirt, which was really awesome of her. When your mom buys you a shirt of a sports player without you asking (especially when her sports IQ is pretty darn low), that's only going to show how big this Lin phenomenon has become. I like Jeremy Lin a lot, but I think the entire team as a whole is what interests me the most. It's one of those teams with the grizzled veterans in Stoudemire, Tyson Chandler, and Baron Davis, as well as the young guys such as Lin and Landry Fields. They still need to work out their team chemistry issues but for the most part, they sure are a fun team to watch. I never thought I'd be this interested in basketball in my life, so I thank Lin for that.

I picked up another Knicks autograph a few weeks ago on my quest to slowly add a few more here and there, and this being of a second year shooting guard with a lot of basketball talent, to go along with his great voice! 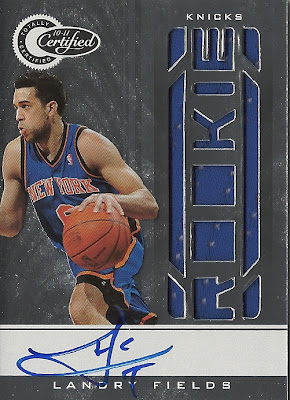 Out of 2010-11 Panini Certified, I bought a rookie autograph of none other than Landry Fields! Fields has succeeded an awful lot during the emergence of Lin, averaging 10 points and 4.5 rebounds a game. Of course, many people are aware of the incident in which prior to the "Linsanity", Fields let Jeremy sleep on his couch, which made that couch probably the most famous couch of 2012! Kidding aside, Landry has a lot of potential in the NBA and for the price I paid, I could not go wrong. Nothing was cooler than seeing former Knick great Allan Houston; Cappie Pondexter of the WNBA; and Fields win the "Shooting Stars" contest during the All Star break. While I didn't follow basketball a whole lot back in the day, I do remember always liking Houston a lot. Also, recently at the Capitale in Chinatown, NY, the Knicks held an event in which the players all participated in having fun with the fans, and without a doubt Landry stole the show, singing a Knicks related cover of the Travie McCoy/Bruno Mars song "Billionaire". Here's a look in case you are interested:
So, who knows how long this team is going to last. No matter what the circumstances though, I still am going to follow it as much as I can! Do we have any basketball readers here? If so, feel free to let me know! As for you baseball fans, don't worry, I am never replacing my #1 favorite sport, and will have plenty to come regarding it!
See Ya!
Posted by Drew at 8:15 PM