Hey guys, Drew back here. A couple of weeks ago, I was pretty bored, so I decided to give some TTM's a try. I did two requests that night and they both happened to come back within a week-ten day range! The first one I'll share has been by far one of the coolest experiences I've had the opportunity to receive since I started my blog back in late 2008. It may not be of a household name, but without a doubt he is a legend of the game in my eyes. 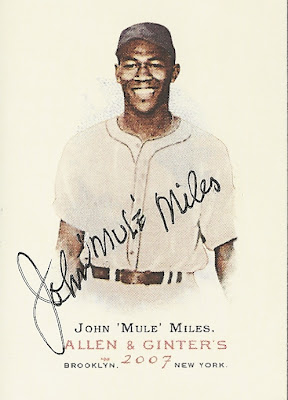 The success was from former Negro League player John "Mule" Miles! I wrote Miles an entire page (front and back) letter, explaining how much appreciation I have for him and for the game of baseball in general, and judging by the overall response, he really must've appreciated it. The first card he signed was courtesy of William, who sent it over to me a couple months ago for me to get signed. It's out of 2007 Topps Allen & Ginter, which besides one Negro League product released in 1992, is the only set that has ever released a card of him. Do you want to know more about him? Well, be my guest to read through this awesome biography he sent me, which was also signed! 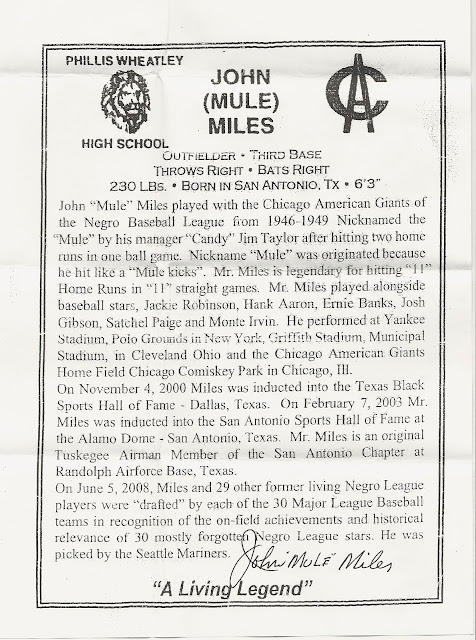 A couple of things that stand out to me are first; that he hit 11 home runs in 11 straight games, which is pretty unreal if you ask me. Also, I find it really neat that Miles was also a member of the Tuskegee Airmen, which as most of you history buffs know, was the group of African American pilots who served our country in World War II. Not only was Miles a very good baseball player, but he was an American hero as well, although he couldn't have been appreciated all that much due to the prejudice he must have experienced in his lifetime. 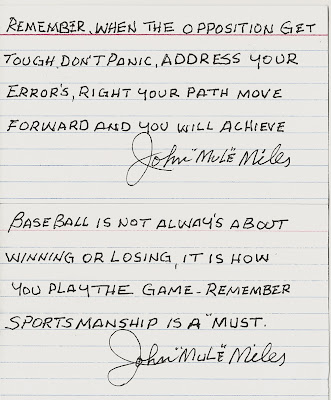 One of Miles' TTM trademarks has been his inclusion of inspirational quotes, and he certainly did not disappoint in my case! Something about these index cards are just absolutely awesome. I recently wrote my entry essay for the National Honor Society, and I dedicated most of it to my love of baseball. I explained that it isn't just any game, but instead a way of life, and I think Miles is great at relating to what I said. 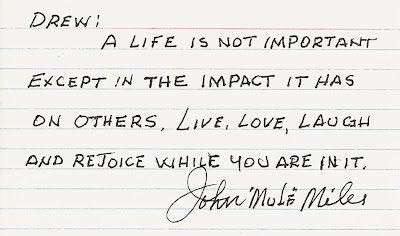 This was my favorite of the three he sent my way, without question. This quote, or quotes similar to this, is pretty common, but it really feels special to own something as powerful as this is from someone who probably used this as motivation to get through every day. I'm sure I could spend hours and hours talking to Mr. Miles, because I'm sure he has many very interesting stories to tell.
While all of the stuff I've shown off thus far has been pretty awesome, nothing in the envelope topped this. 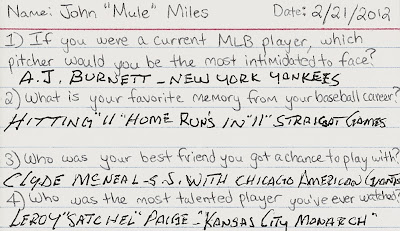 I decided to try something new with this request, by asking Mr. Miles four questions and wondering if he would answer them. Sure enough, he answered all four, not like it was really all that much of a surprise. Here is the short interview, in case you couldn't read my girly handwriting:
DM: If you were a current MLB player, which pitcher would you be the most intimidated to face?
JM: A.J. Burnett- New York Yankees
I was very surprised by this answer, without a doubt. I expected to see a Tim Lincecum; CC Sabathia; or Cliff Lee for example, but Burnett? There's no question that Burnett's stuff is nasty when he's on, but if Miles is intimidated of last year's Burnett, he might need to spend a little extra time at the batting cages! I understand his answer though, because he was certainly one of the better pitchers in the league in the past decade, and that curveball is near-filthy.
DM: What is your favorite memory from your baseball career?
JM: Hitting "11" Home Runs in "11" Straight Games
As I mentioned, I find that to be really impressive.
DM: Who was your best friend you got a chance to play with?
JM: Clyde McNeal- SS with Chicago American Giants
DM: Who was the most talented player you've ever watched?
JM: LeRoy "Satchel" Paige- Kansas City Monarchs
No surprise here. Paige was perhaps the greatest pitcher in the history of the game. You can't go wrong with a pitcher who threw a blazing fastball, even into his late 50's.

All in all, I can't begin to tell you guys how happy this success made me! If any of you are into this sort of thing and haven't sent Mr. Miles a letter, I really suggest you do. He's in that elite TTM league with Bobby Doerr, the late Bob Feller, and Virgil Trucks! Thank you so very much "Mule", it means an awful lot.
See Ya!
Posted by Drew at 7:51 PM