Hey guys, Drew back here! Moving along with the rest of the stuff cluttering my desk, here are a few cards I was able to pick up off of eBay recently, both of which go towards my new set chase! Take a look: 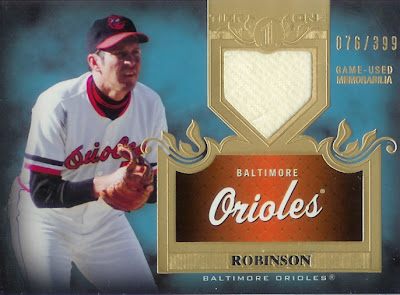 First off was this Brooks Robinson jersey relic out of 2011 Topps Tier One, numbered 76 of 399! Obviously, I know a certain blogger who would love the heck out of this card, but for the sets sake, it's going to have to stay with me. There's no doubting that besides Mike Schmidt, Brooks could be arguably one of the top 2 or 3 best 3rd basemen of all time! This card is so nice, and the jersey relic is so soft! 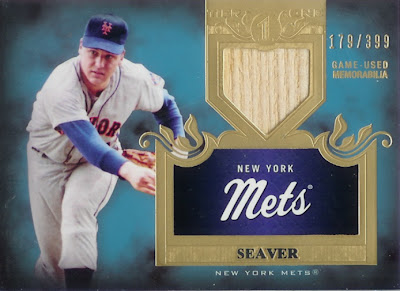 The next, and final card for this post was this 2011 Topps Tier One relic numbered 179 of 399 of Mets Hall of Famer Tom Seaver! I'm not sure what to really make of this card. The design, photo, and just about everything was executed perfectly. But I'm a little stumped as to why they chose to use a bat relic of his for the set. It's very rare to find bat cards of pitchers, and it can be a cool find here and there, but in a high end relic set like this, wouldn't it be smart to choose something more, um, relevant to the player? Seaver was a lifetime .154 hitter, with 12 home runs, and 99 hits in 1552 at bats. Go Tom Terrific! Besides that fact it's a pretty nice addition to the set chase!
Alright that'll just about do it guys, please shoot me an email or comment if you have any of the Tier One relic cards. I'm only looking for the the single relics, except for these players- Hank Aaron, Babe Ruth, and Mickey Mantle, who I am interested in adding the dual relics for. Thanks!
See Ya!
Posted by Drew at 6:00 PM