Mail from "The Angels, in Order"!

Hey guys, Drew back here. This post has been long overdue, as I received some nice cards a couple of weeks ago from my buddy Tom, of the blog The Angels in Order. Tom inquired to me about some 1961 Topps cards I needed, and we were able to work out a pretty good deal! Take a look at some of what he had to send my way: 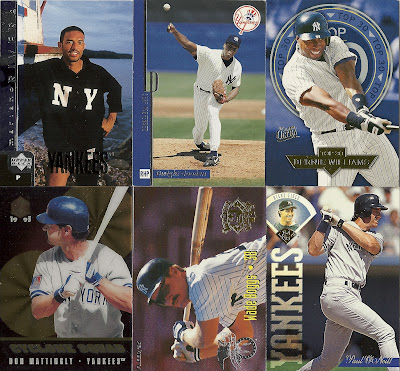 As extras, Tom threw in a lot of mixed 1990's-2000's Yankees cards, including quite a few I didn't have already. One card that I got a good kick out of was the Mariano Rivera card in the top left corner of the scan above, from 1998 Upper Deck. Mo's looking quite sexy in those short shorts! Also, he sent a Don Mattingly card I didn't have, which is always a great accomplishment. 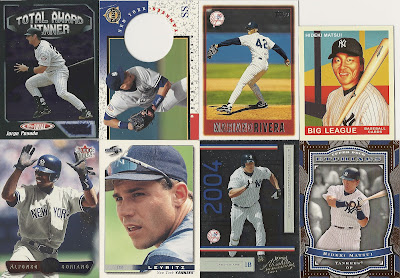 Continuing the trend, here are a few more mixed Yankees cards. The Rivera (3rd from left, top row) is an insert from 2011 Topps, which was by far one of the worst insert set Topps has already done. In my opinion, once you make a card, there is really no need to honor it by making it again. However, I do really like the Matsui cards, he was certainly a very good Yankee and I enjoyed watching him a lot.

Another insert set collectors aren't necessarily fans of was without a doubt the 2007 A-Rod Home Run History cards. They certainly were pollutants to the set that year, and I've managed to acquire about 20-30 of them, mainly through trades. There couldn't have been much of a thought process going into that set, and in my opinion it would've been much cooler if they used 1) a different design and 2) photos of each of his home run swings. They have to have at least one picture of each of his home runs.

These 3 are from the 1991 Topps Micro set, of Kevin Maas, Steve Sax, and Roberto Kelly, 3 of the most overproduced Yankee players of the 90's without question. These are certainly a neat concept, but they can be a pain because they tend to always spill all over the floor whenever they're in stacks of cards I'm holding. Storing these can be a pain too, but for the most part they're pretty cool.

These three cards were the cake of the trade, all of which from the 1961 Topps set. All of the cards are of Angels players: Tom Morgan, Ken McBride (RC), and Ken Hamlin. I hope these weren't important in your team set building Tom, if so you really didn't have to offer them up. But nonetheless they are all in very good condition and they push me to a 35.7% completion rate. Still a ways to go, including the relentless high numbers. It'll certainly be a while before I'm close to capping this one off. 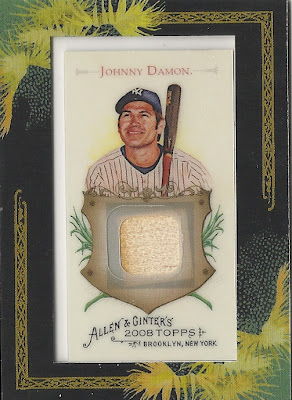 But wait, there's more! Tom also decided it would be nice of him to throw in this 2008 Allen & Ginter bat card of Johnny Damon! I really was never a fan of Damon during his Red Sox days, but when he went to the Yankees and shaved his Caveman beard off, I instantly started to like him. By watching him play, besides his near-horrid throwing arm, he was a very solid player throughout his prime, and in his four seasons as a Yankee! This card is very nice all around, and I'm glad you threw it in Tom!

On a similar note, I'm very curious to see where Damon will end up signing by Opening Day, if he is signed at all. The Yankees have had discussions with him to fill in the DH role, which in my opinion would be a pretty solid signing. He can't provide a whole lot in the field, but he's a good clubhouse guy and one of our generation's better players, and it would be nice to see him have a shot at 3000 hits as a Bronx Bomber. I guess we'll have to wait and see where he lands.

So, thanks a lot again Tom for all the help, and I hope you're looking forward to your package back, which was mailed this morning! Everyone be sure to subscribe to Angels in Order if you haven't already!