Mail from a New Friend, Scott!

Hey guys, Drew back here. I was really fortunate a few weeks ago to meet a kid named Scott through William! Scott is one year older than me, and is a genuinely awesome person without a doubt. William met him at one of his card shows and worked out a few deals with him, thus leading to him directing Scott over to my blog, as he always seems to do! Scott emailed me asking about a future trade, and we were able to work out a blockbuster trade as reporters would say. Take a look at some of the sweet cards he sent over to me: 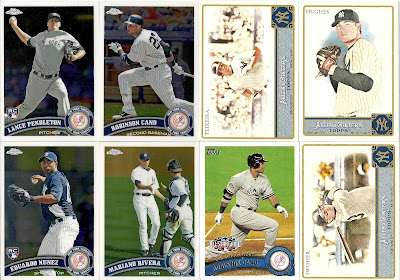 I'll start with the extras I received. There were quite a few cards I needed badly, such as the Cano chrome card and the Eduardo Nunez chrome rookie. I even think I still needed the Nick Swisher Allen & Ginter card, which goes to show how well I've collected him over the past few months. The other day I was sorting out cards for a trade and found a box of Allen & Ginter laying there, still filled with all of the loose cards I already broke out of packs. I opened that box in August. Time to catch up there, Drew. 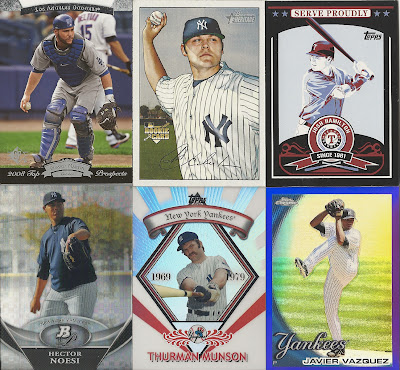 Here are some of my favorites of his throw ins. I absolutely love the Thurman Munson cereal box chrome refractor, which has alluded me for a few years now. The Vazquez purple refractor is numbered out of 599, and while he wasn't necessarily effective as a Yankee during his two stints, it really is a gorgeous card. I also really like the Josh Hamilton propaganda card. Hamilton has undergone a bit of speculation over this offseason with the whole "couple of beers scandal", which I find absolutely ridiculous and blown up. He still remains one of my favorite players, so nice try media. 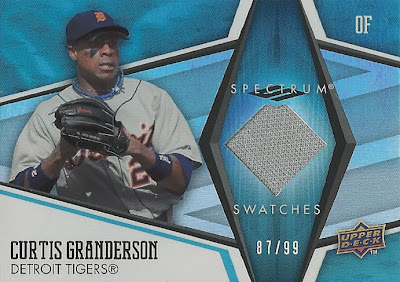 We now arrive to the meat of the trade, which begins with this very nice 2008 Upper Deck Spectrum relic card numbered to 99 of Curtis Granderson! Curtis has become a favorite in New York after his enormous 2011 season, and while it may be hard to repeat, he may be one of the only players in baseball that has the talent to be able to repeat it. Granderson is part of my secondary player collection list, and I'm always looking for cards of his I didn't already have. 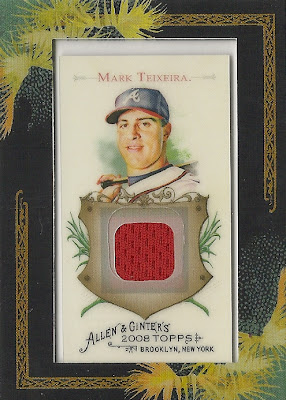 Next was this 2008 Allen & Ginter relic of Mark Teixeira. There isn't much to dislike about Mark, besides his often slow starts and occasional painful to watch playoff performances. He's a great clubhouse guy, as well as perhaps the best defensive first baseman in the league, and a very good power hitter. Sometimes his streaks irritate me but for the most part I like the guy a lot. This card is awesome too, even though Tex hardly played for Atlanta. Any red relic is uncommon to find, and as soon as Scott offered it to me I jumped right on it! 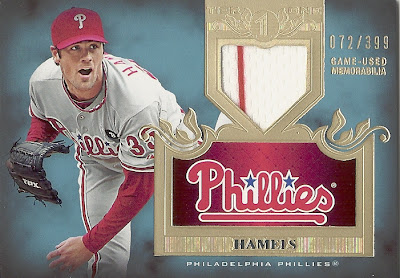 The final relic of the three he included in the trade was for my 2011 Topps Tier One relic set, this being of Phillies pitcher Cole Hamels. Hamels is one of the newer players on the checklist, and while most people wonder how he shares a card in the same set as the Great Bambino, I find it kind of cool to have a solid variety of players. Hamels will probably never have the career statistics to put himself in such an elite set, so I guess he should enjoy his time to shine now while he has it. This makes the 11th card of the 50 card set for me so far, which is great considering I started the set just a couple of months ago!
However, we aren't quite done here yet! Scott informed me prior to mailing his package out that he was going to be attending a dinner event with some current major league players, and offered to try and get me an autograph! I gladly took up his generous offer and sent over 2 customs cards, one for him and one for me, of one of the players attending the dinner! 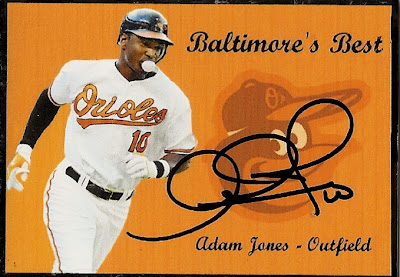 Scott didn't promise me an autograph by any means, but the fact that he was willing to try meant a lot to me. Sure enough, however, he came through in the clutch, landing me an Adam Jones autograph! Normally I don't tend to go for many Orioles cards/autographs, mainly because they typically don't stay in my collection all that long. In my opinion though, Jones has to be their best player nowadays, and I thought it would be cool to at least have his autograph. He inscribed his number 10 below the autograph, and I love the way it came out! Scott had a great experience meeting Jones, Willie Bloomquist, and a bunch of current prospects at the dinner event, and you can take a look at his recap here.
Thank you so much Scott for everything you did for me! I really look forward to extending our friendship more and more and making more deals in the future! Everyone please be sure to check out his blog when you get a chance, even though he is... a Red Sox fan!
See Ya!
Posted by Drew at 11:33 AM