Getting to Meet a Current Yankee!

Hey guys, Drew back here! After another week of school has concluded, again without a single snowflake hitting the ground, I'm back here to show off my experiences from last weekend's "Man Show", a show dedicated to men, men, and well... men. At this packed show, there were all sorts of manly games, merchandise, beer, and what not. The reason Dad and I went there was because a company called Dream Team Promotions was holding an autograph signing! The Dream Team company has held many local signings of current New York Giants football players lately, with an occasional Jet or baseball star mixed in. They had two signers at this show- David Robertson of the Yankees, and Chase Blackburn of the Super Bowl Champion New York Giants! If you guys know me well enough by now you'd know who I was going to meet!

It was absolutely mobbed with men (and a few women here and there, along with my younger sister) at the show, and the lines were really long for the most part. I got into the Robertson line as soon as I could, and while we soon found out we were in the wrong line, we still didn't have to wait all that long for our opportunity to meet him. I forgot my digital camera at home, so I put my Dad and my sister in charge of taking pictures with my iPod touch and my dad's Droid. The pictures came out better than I thought, so I was happy about that. 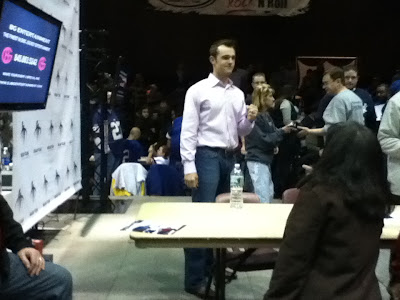 The Yankees' "Houdini" was sporting his 2009 World Series ring, and the picture above is of him showing that thing off. I would too if I ever got a World Series ring! After about a 45 minute wait, I finally got my chance to have my meet and greet session. 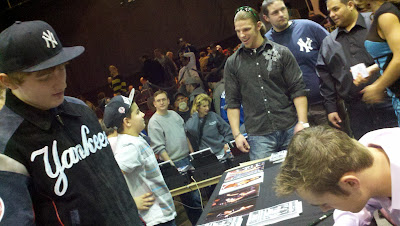 For the first time in a long time, I actually felt comfortable talking to an athlete. Normally, I tense up and get really nervous, and I have a loss for words by the time it's my chance. But, Robertson was really down to Earth and friendly as can be, so I was able to ask him about this upcoming season and if he's ready to take him another World Series trophy. He told me he would love to get a matching ring for his opposite hand, and that he's going to try to help the team bring home number 28! 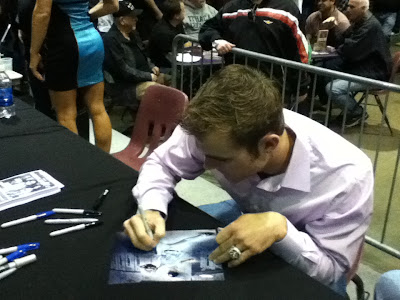 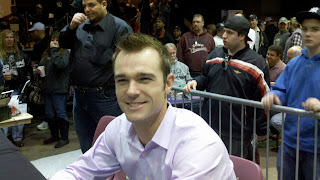 I wasn't allowed a photo opportunity with him, as you had to pay extra money, which I find ridiculous, but oh well. I bought a photo at the show for him to sign, although my original intention was to have him sign my Mantle photo. I thought about it on the ride there though, and I thought he wouldn't really fit on a photo filled with former Yankee autographs. By the way, thank you to everyone who helped me identify all of the autographs, especially you Anonymous, who helped me identify the final auto, of Ron Davis. Anyway, Robby inscribed everything I wanted him to inscribe and more, which is just beyond awesome! I was worried with all of the steep autograph prices the company had that inscriptions would cost extra, but even if they did, he didn't seem to care one bit. He was a class act, for sure. 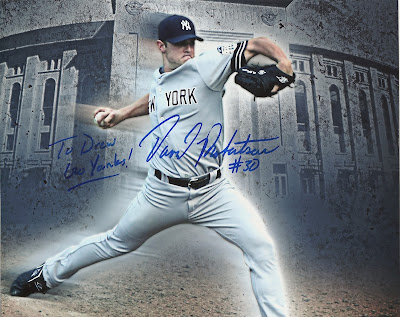 I've always liked Robertson a lot, but after this signing my appreciation for him grew even more. Sure, he got paid good money to sign autographs, but it's really a rarity to see any young players doing signings nowadays in my area. I hope the Dream Team Promos company continues to succeed with these signings, because I would love to meet some more Yankee players who aren't locked up to contracts with Steiner yet. Robertson was well worth the money, as you can see from the autograph and the overall experience. Even though I didn't necessarily get a picture with him, he was just a super cool guy.
Thanks again Dream Team, and David Robertson! You guys are awesome! Also thanks to Dad as always for taking me to the show, it was definitely worth it for me!
See Ya!
Posted by Drew at 4:06 PM