Hey guys, Drew back here! About two weeks ago, I had to check out some 2012 Topps cards, but I wasn't interested in dropping a ton of money for a box, or even packs. Instead, I took the eBay route, and picked up a few relics from the set. Take a look: 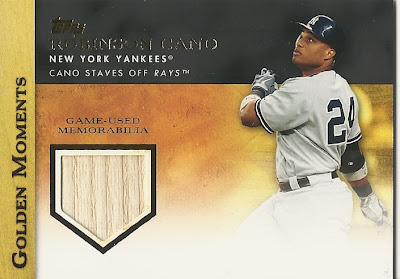 First, I managed to add the Robinson Cano bat relic to my Cano PC, for about $6! The relic design is just ok to me for this set, because I think there's just a bit too much space not used. However, I like that it's a clean design with not a whole lot going on, putting more emphasis on the relic piece. The inserts using this design without the relic look pretty bad though, not going to lie. 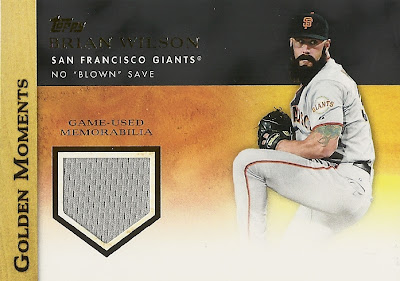 The second, and final (for now) relic I picked up was this one above of Giants freak closer Brian Wilson, who certainly has one of the more different personalities in the game today. Some people hate him, some people love him. Personally, I think he's awesome, because 1) his beard is amazing, and 2) he adds something to baseball that not many other players can do. He's helped transform his Giants team into a fun to watch, contending team with many characters that make it easy to root for them. This is my first semi-decent addition  to my collection of Wilson, and hopefully there will be a few more to come in the future.