Hey guys, Drew back here. I'm sure, most of you are sick of me blabbing on and on about how special this show was, and how lucky I am, etc etc. But, I promise you guys that besides a few small posts I have planned, I'm just about done and ready to move on with other stuff. Trust me though, this post right here is definitely worth the read, and I could use some help! So, without any further gibberish, here is Part 6, dedicated to my awesome door prize win!


PART 6: Door Prize Success... Again?
As most of you guys who have read my blog in the past know, the White Plains shows happen to give away door prizes every couple of hours, which requires just filling out a simple card and hoping to get your name pulled. Dad, Mike, and I have had a very good strategy with them over the years, and we've been able to win some things here and there! Today was no different. I took home this beauty, as a result of somehow getting my name pulled from the box again! 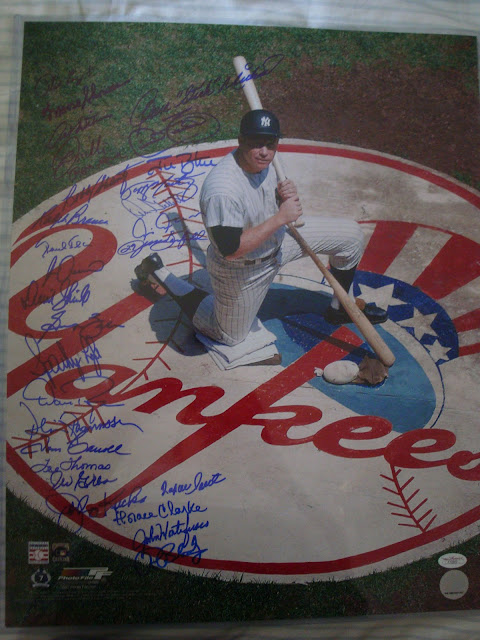 This photo is truly a thing of beauty! It's a 16x20 photo of Mickey Mantle, that is signed by 29 former Yankees players! There isn't any specific time span as to the players who signed the photo, but a majority of the players on here played on the Yankees pre-1980. Not all of them played with Mantle, for example Jesse Barfield and Chris Chambliss, but all of them had been pretty solid players over the years. I was so pumped up when they announced my name, and I'm pretty sure most of you can see why. 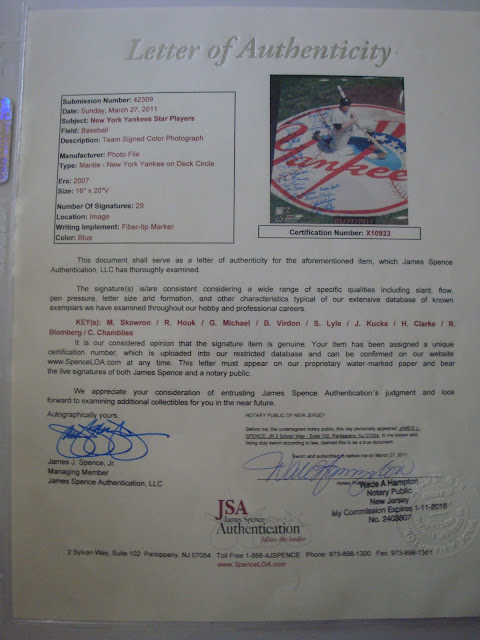 As far as authentication goes, the photo came along with a letter of authenticity from JSA, explaining all of the exact details of the photo and guaranteeing its authenticity. It didn't name all of the players on the photo, but it says some of the key players on there are Moose Skowron, Ralph Houk, Gene Michael, Bill Virdon, Sparky Lyle, Johnny Kucks, Horace Clarke, Ron Blomberg, and Chris Chambliss! I identified pretty much all of those without having to look at the letter, but I can't seem to find Bill Virdon anywhere on this photo. I got him through the mail a while back, so I know what his autograph looks like, and I don't see it anywhere on here.
Now here's where I need your help. I've been able to identify a majority of the autographs on the picture already, but there are still some that I can't figure out yet. Besides the Virdon (mistake possibly?), can any of you name the autographs I don't know in the comments below? I numbered each autograph, and you can just tell me, for example: Auto 2 is Moose Skowron or something. I would greatly appreciate it, because some of these autos have me stumped. 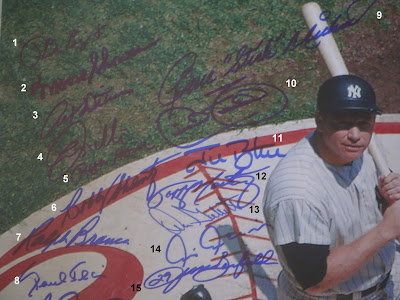 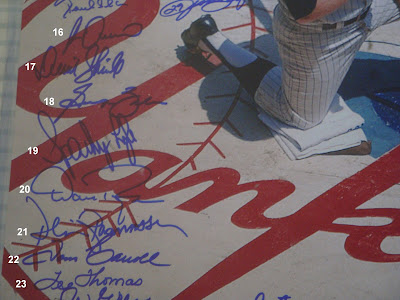 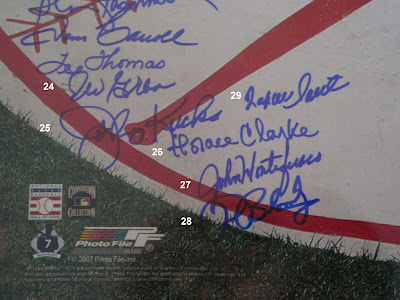 28: Ron Blomberg (Played 1969, 1971-1976 for NYY)
29: Rafael Santana (Played in 1988 for NYY)
I was able to name 21 of the 29 autographs, but again any help with the remaining 8 would be greatly appreciated. Also, I know a lot of you guys have experimented with these large photos signed by multiple players, and I wanted to know what your take is on whether I should start to add more players to it and fill it up more, or if I should leave it as is, frame it, and call it a day. If I do decide to continue the quest for autographs, I don't think I would include current players, because they simply wouldn't really fit in. I think that majority of the players on here were born before Mantle retired, so maybe that could be a good way to arrange it by.
This will definitely go down as one of the best card shows, if not THE best one yet! I wasn't the only one to win, however, as my friend Mike came home with something too. I'll save that for a later post! We are so lucky, and I'm really fortunate that my Dad was able to take me to the show. It means a lot.
See Ya!

**UPDATE: Got them all, thank you to everyone for the huge amount of help! Couldn't have done it without you all!**
Posted by Drew at 11:18 AM